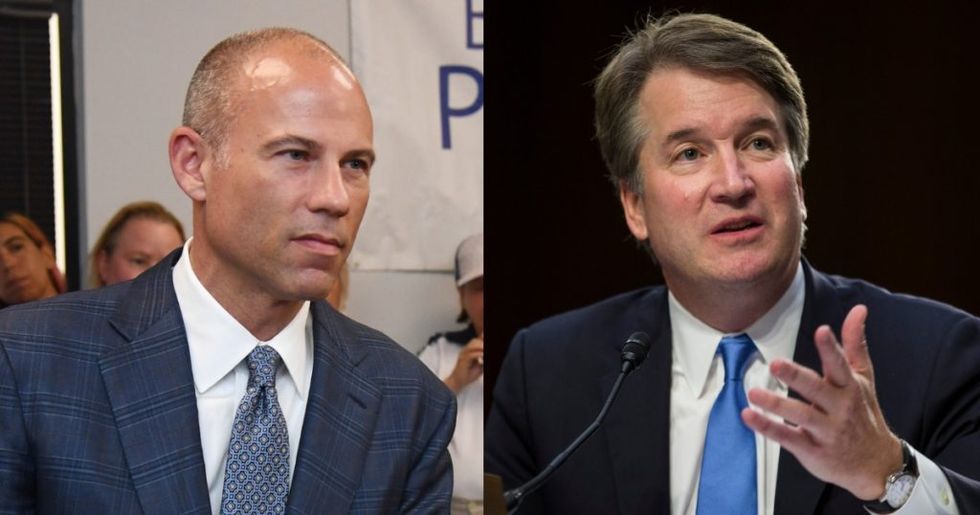 Michael Avenatti on Wednesday revealed explosive new allegations against Supreme Court nominee Brett Kavanaugh and called on the Senate Judiciary Committee to hold off on confirming Kavanaugh until there is a full FBI investigation.

Avenatti is representing Julie Swetnick, who claims she witnessed a slew of gang rapes facilitated by Kavanaugh and his friends while they were in high school. Swetnick is a former federal employee who has held multiple security clearances in various government agencies and is now the third woman to accuse Kavanaugh of sexual assault.

In her statement, sworn under penalty of perjury, Swetnick says she was the victim of one such attack.

"We demand an immediate FBI investigation into the allegations," Avenatti tweeted. "Under no circumstances should Brett Kavanaugh be confirmed absent a full and complete investigation."

Below is my correspondence to Mr. Davis of moments ago, together with a sworn declaration from my client. We demand… https://t.co/W07DcY6bKq
— Michael Avenatti (@Michael Avenatti) 1537972955.0

"I simply do not understand why there has been no response to my emails," Avenetti wrote to Davis o Wednesday. "This is an urgent matter that deserves your immediate attention and that of the Committee. Time is of the essence and we renew our requests in my email below."

On Monday, Avenatti emailed Davis asking why he had "yet to receive a response" to his requests for investigations that he had sent to the Committee.

Avenatti went public with Swetnick's accusations after Mike Davis, the chief counsel for nominations for the Senate Judiciary Committee, appeared to have ignored Avenatti's plea for investigations into the allegations against Kavanaugh.

Avenatti's tweet seems to have drawn the attention of the Senate Judiciary Committee. Supreme Court reporter Ariane de Vogue reported that the Committee has "immediately started looking" into the new accusations and would like to know when Swetnick can be made available to testify.

@Arianedevogue also: They provided Avenatti with a list of FBI field offices. Democratic staffers were cc'ed on the email to Avenatti.
— Jake Tapper (@Jake Tapper) 1537977475.0

Some people are shocked that the Republican-controlled Committee may be starting to cave. In the week since Dr. Christine Blasey Ford became the first public accuser, Republicans have denigrated the allegations. Majority Leader Mitch McConnell (R-KY) says they're a "smear campaign."

@jaketapper @Arianedevogue In a normal world this should kill the nomination but we live in Bizarro World now. Julie Swetnick
— Fruitvale Local (@Fruitvale Local) 1537977735.0

In her sworn statement, Swetnick says she met Kavanaugh and his "joined at the hip" best friend Mark Judge at a house party sometime between 1980 and 1981.

Swetnick recalls seeing Kavanaugh and Judge at more than 10 parties, at which she witnessed the two friends "drink excessively and engage in highly appropriate conduct, including being overly aggressive with girls and not taking 'no' for an answer."

"This conduct included the fondling and grabbing of girls without their consent," Swetnick states, as well as "mean drunk" Kavanaugh being "verbally abusive toward girls by making crude sexual comments to them that were designed to demean, humiliate, and embarrass them."

Swetnick says she witnessed Kavanaugh and Judge "spike" the "punch" with "drugs and/or grain alcohol" at house parties "so as to cause girls to lose their inhibitions and their ability to say 'no.'"

Swetnick states she avoided the punch because of the perceived risk, and that Kavanaugh and Judge would "target particular girls so they could be taken advantage of."

Additionally, Swetnick says she witnessed Kavanaugh and Judge "cause girls to become inebriated and disoriented so they could then be 'gang-raped' in a side room of bedroom by a 'train' of numerous boys."

Swetnick recalls "seeing boys lined up outside a bedroom waiting for their 'turn' with a girl inside the room."

Swetnick claims she was a victim of one such gang-rape "where Mark Judge and Brett Kavanaugh" were present. She says she told at least two other people about the attack, during which she was "incapacitated without my consent and unable to fight off the boys raping me."

Swetnick believes she was "drugged using Quaaludes or something similar placed in what I was drinking." She added that there are other witnesses "that can attest to the truthfulness to each of the statements above."

Kavanaugh has continued to deny all the allegations against him.

Patricia Arquette has been championing the victims' calls for an FBI investigation.

And she's not taking any guff.

@MrStanwyk @MichaelAvenatti I want an FBI investigation and find it incredibly suspicious you and the Republicans don’t.
— Patricia Arquette (@Patricia Arquette) 1537977614.0

She knows what's coming because it's already happening.

When questions arose over why Swetnick would attend such parties, Arquette explained the reason.

@ProScoreMusic @MichaelAvenatti A teenage girl who thinks this is what everyone is doing because it was normalized.… https://t.co/AbWtSaX4jk
— Patricia Arquette (@Patricia Arquette) 1537980085.0

@MichaelAvenatti If they have nothing to hide and Mark Judge can help Kavanaugh, then I simply have to ask.....… https://t.co/NDbVwpcVUV
— Fred Guttenberg (@Fred Guttenberg) 1537978587.0

Kavanaugh turned his back on Guttenberg when the grieving father tried to shake the judge's hand at a nomination hearing earlier this month.