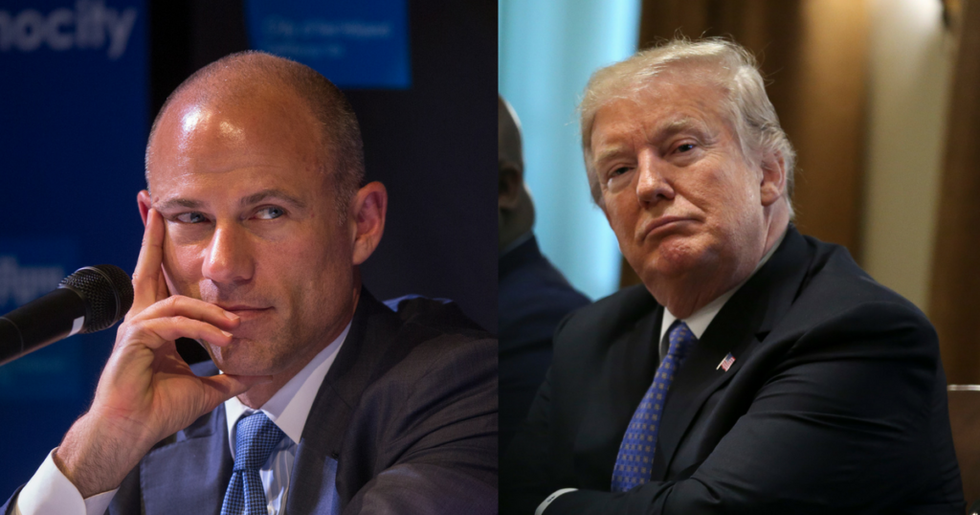 During the 2016 presidential race, former First Lady Michelle Obama coined a saying that she hoped would elevate national political discourse amid a brutally ugly campaign.

"When they go low, we go high," she would say in response to below-the-belt attacks coming from then-candidate Donald Trump and his cohorts. Clearly, the high road didn't prevail, as Trump defeated Hillary Clinton despite scores of scandals and an endless barrage of insults, lies, and behavior unbecoming of a presidential candidate.

On Wednesday, Michael Avenatti, the lawyer representing multiple women who claim to have been paid off by Trump to keep quiet about alleged affairs they had with the billionaire, tweeted a new take on Obama's mantra.

Because, as Avenatti put it, "different people have different approaches at different times."

"Here is mine for the next two and half years: WHEN THEY GO LOW, WE HIT HARDER."

Different people have different approaches at different times. Here is mine for the next two and half years: WHEN… https://t.co/FrW7Oex21d
— Michael Avenatti (@Michael Avenatti) 1533122577.0

Avenatti has been an unrelenting critic of President Donald Trump, stemming from his representation of former adult film star Stephanie Clifford. Clifford charges that Trump and his former lawyer and fixer, Michael Cohen, forced her into signing a non-disclosure agreement and accepting a $130,000 hush money payment over an affair she alleges she had with Trump in 2006.

The NDA was executed less than two months before the 2016 election and is now under investigation for possible campaign finance law violations.

"People ask me why I think I can prevail against Mr. Trump," Avenatti wrote in a tweet. "I tell them it’s because (1) I’ve bought groceries before and (2) I know you don’t need an ID to buy groceries."

Last month, Avenatti teased about running for president in 2020 as a Democrat if he believes they lack a candidate who can defeat Trump.

One resister noted that Trump's tactic is what drove him to victory.

Others said Avenatti's approach should have been the Democrats' strategy all along.

"We should have had that approach since the beginning!"

The more conspiracy theorists attack me, the more confident I become. It shows they see me as a significant threat… https://t.co/bghTbZKdFR
— Michael Avenatti (@Michael Avenatti) 1533160755.0