Mike Pence Is Getting Slammed for Headlining an Event Where a Christian Rabbi Offered a Prayer for the Pittsburgh Victims, and Pence's Office Just Responded 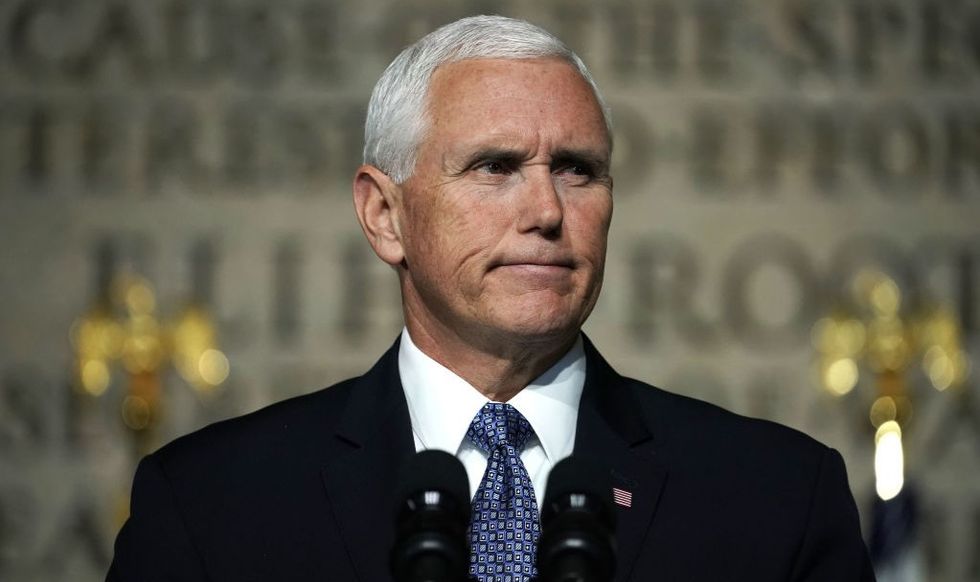 Vice President Mike Pence drew heavy criticism Monday for a campaign rally appearance in Michigan. The rally began with a prayer from a Messianic rabbi.

Messianic Judaism believes Jesus is the messiah and believes the New Testament is an extension of the Torah. However the Jews for Jesus sect—as they often bill themselves—lacks recognition as Jewish by mainstream Judaism in the United States or the supreme spiritual authority for Judaism in Israel, the Chief Rabbinate.

Further, Jews pointed out the rabbi broke with Jewish tradition by not beginning with a prayer for the dead in remembrance of the 11 people murdered at Tree of Life Synagogue in Pittsburgh. Instead, Rabbi Loren Jacobs prayed for a list of Republican candidates.

Then, rather than praying for the victims and survivors of the Pittsburgh synagogue attack, Mike Pence's Christian… https://t.co/ACFRaG5w00
— rafael (@rafael) 1540858953.0

It was only after being invited back on stage by the Vice President, who stated he thought it would be good to have Jacobs pray for the victims of the Pittsburgh mass shooting, that Jacobs mentioned or prayed for the 11 people murdered in an antisemitic attack.

But Jacobs again invoked the Christian messiah to pray for the murdered Jews which further angered people. Watch his prayer here.

In response to the backlash, one of the Republican candidates, Lena Epstein, took full responsibility for inviting Rabbi Loren Jacobs to the rally and asking him to start the event with a prayer. Epstein then attacked the critics for "religious intolerance."

"We often have ecumenical prayers at the beginning of events that aren't an endorsement of any particular faith."

Agen added that Pence heard Jacobs speak at the beginning of the rally and invited him back onstage "so so the entire audience could hear him."

However critics did not accept the Vice President's explanation. They called the choice by the self-described Evangelical Christian a distinct message.

Many still gave Pence, as the headliner and senior GOP representative at the rally full responsibility for the allowing Jacobs to open the event.

Eleven Jewish Americans are murdered for being Jews in their house of worship and Mike fucking Pence marks the trag… https://t.co/hSQc9BkkSE
— David Simon (@David Simon) 1540867109.0

VP Pence apparently couldn't find an actual rabbi. Instead he got a Christian leader of a group of Christians who c… https://t.co/SXxIJr6ycl
— Chris Savage (@Chris Savage) 1540850141.0

Two days after the worst anti-Semitic massacre ever on American soil, the Vice President appears at an event with g… https://t.co/HxtIcmwlmH
— Jeet Heer (@Jeet Heer) 1540845487.0

You see, they need to placate Jews and allies who support them without alienating their white nationalist base. Wh… https://t.co/E602oJRD9K
— rafael (@rafael) 1540861757.0

Now, even in inviting this speaker - they literally use it to coopt our holiest traditions - things Jews have been… https://t.co/VJmV6dEbaF
— rafael (@rafael) 1540861835.0

If you read the killer's messages on social, he thought Trump was giving into Jews too much, and other white nation… https://t.co/FjdXPeQMJ1
— rafael (@rafael) 1540861989.0

@ThankYouMrM @LenaEpstein I've been to Temple Beth El. I cannot imagine the congregation being happy being pulled into this mess.
— Lois Bez (@Lois Bez) 1540872303.0

Whether Epstein or Pence's team invited Jacobs to the midterm elections rally, their stated goal of unifying people appears to be more alienating and dividing.

Midterms are slated for Tuesday, November 6, 2018.