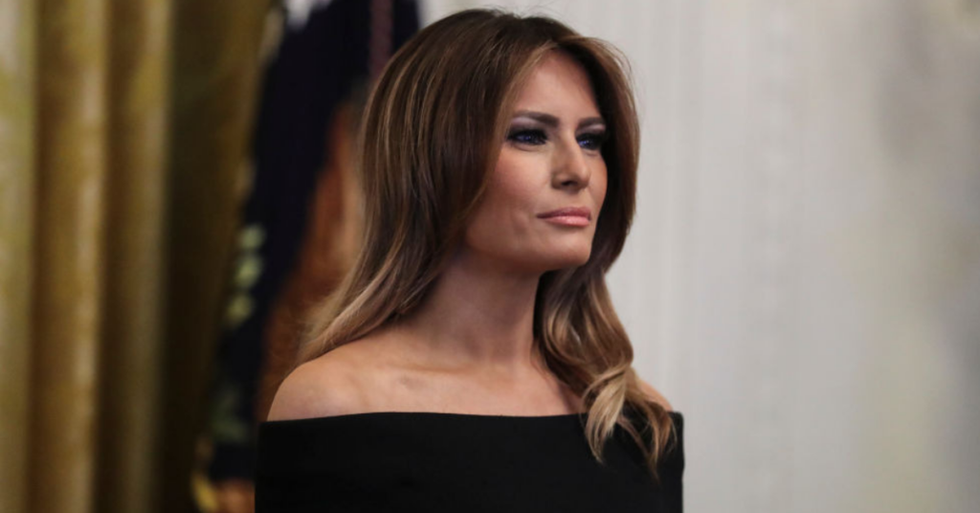 Today is First Lady Melania Trump's 49th birthday, and the White House commemorated the day by posting a photograph of her sitting by herself in the Oval Office during a bilateral meeting between President Donald Trump and Czech Prime Minister Andrej Babis.

The photograph, taken in early March, shows the press ignoring the First Lady in favor of her husband.

The picture also appears to be a rather accurate representation of Mrs. Trump's time in the White House, as many observed.

@WhiteHouse @FLOTUS What a lovely image of Melania with her faithful companion, an empty couch cushion.
— Lucas Barton (@Lucas Barton) 1556287462.0

@WhiteHouse @FLOTUS The abject lack of joy and humanity is right on brand for the @GOP Where are her child and husband?
— Greg Proops (@Greg Proops) 1556289873.0

@WhiteHouse @FLOTUS The photographers are not aiming at her, they're aiming at someone just in front and to her rig… https://t.co/sLRvqMKAHK
— MakeAWish (@MakeAWish) 1556289354.0

@WhiteHouse @FLOTUS Of all the photos of Melania you could've chosen, it's the one where a gang of press is focusin… https://t.co/QMdhLBpDIj
— Patricia Lomden (@Patricia Lomden) 1556287712.0

The photograph even sparked a few new memes, of which one of Melania flanked on one side by Russian leader Vladimir Putin, is the most pointed.

The day the photograph was taken––March 7––was also the day Mrs. Trump and Monika Babisova, the wife of Prime Minister Babis, shared an awkward moment after their husbands left them hanging outside the White House.

A video of the guests’ arrival shows President Trump greeting Babis and Babisova after they step out of a black car.

Trump then leads Babis inside as the First Lady steps aside, seemingly waiting for the traditional photo opportunity before heading into the White House. Babisova stands back as well and the two women look at their husbands leaving together before they both shrug and follow.

The moment, for many critics, demonstrated the two world leaders’ lack of basic chivalry.

The First Lady, for her part, says she and Babisova spent that day discussing “the many important issues children are facing around the world today,” in accordance with her #BeBest campaign.

It was wonderful to welcome the Prime Minister & his wife Monika Babišová of the Czech Republic to the @WhiteHouse… https://t.co/ECBH6jvInR
— Melania Trump (@Melania Trump) 1551996332.0

It's odd that the White House would choose that photograph of Mrs. Trump when they have thousands of others––including many of her meeting with children––at their disposal, but the Trumpian years have been strange indeed.