Dinner could be awkward tonight. 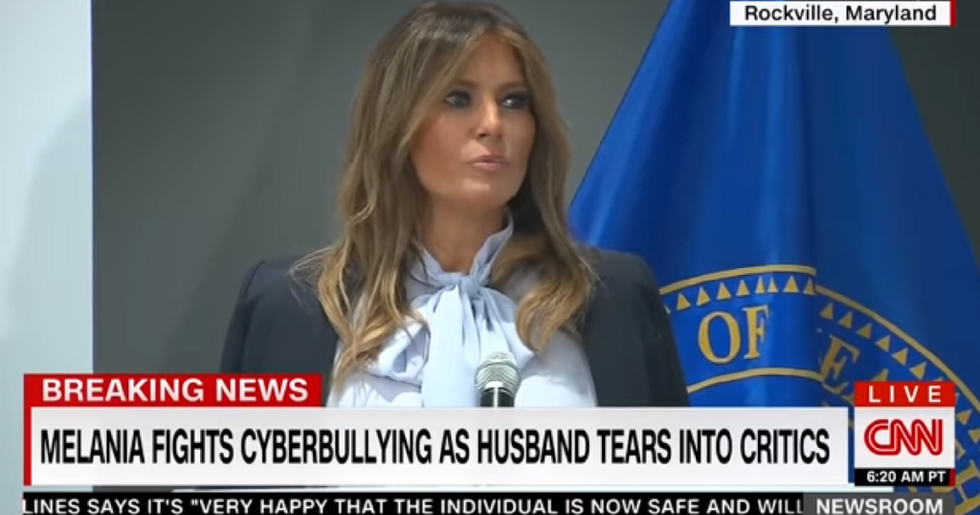 First Lady Melania Trump appeared to have knocked her husband's online behavior while delivering a speech on cyber-bullying on Monday.

Speaking at the Federal Partners on Bullying Prevention, an anti-bullying event in Rockville, Maryland, the First Lady said even though children are well-versed in the boons of social media, it's up to the adults to ensure "successful and safe online habits."

"Let’s face it—most children are more aware of the benefits and pitfalls of social media than some adults," she said. "But we still need to do all we can to provide them with information and tools for successful and safe online habits."

I encourage technology and social media companies, schools and community groups, to establish more opportunities for children such as Microsoft’s Council for Digital Good," the First Lady said. “By listening to children’s ideas and concerns, I believe adults will be better able to help them navigate this often-difficult topic.

The First Lady also said that abusive behavior on social media is "harmful and destructive." Trump was promoting her "Be Best" anti-bullying campaign, which she launched in May.

"This is why ‘Be Best’ chooses to focus on the importance of teaching our next generation how to conduct themselves safely and in a positive manner in an online setting," Trump said, talking about the necessity of positive online interaction.

The First Lady praised students for their "deep understanding of how important it is to be safe" online. She said she was also "inspired by their sincere commitment to reducing peer-to-peer bullying through kindness and open communication."

But the First Lady's passionate call for tolerance are at odds with President Donald Trump's behavior, particularly on Twitter. Last week, the president referred to former White House aide Omarosa Manigault-Newman as a "dog," and has habitually berated his critics via the online platform.

CNN's Poppy Harlow pointed out that despite her husband's behavior, the First Lady remains steadfast in her pursuit of ending cyber-bullying.

"The elephant in the room, of course, is the cyber-bullying that her husband, the president, engages in on a daily basis," Harlow said. "She has said before, you know when she said in March, I know people are skeptical about me talking about this issue but that’s not going to stop me, and it hasn’t."

Kate Brower, a CNN contributor and author of First Women: The Grace and Power of America's Modern First Ladies, told Harlow that "some adults," as Trump phrased it, was in reference to the president.

"You could think of it as a veiled message to her husband, right?" Brower said. "And she has asked him to tone down his tweeting, to maybe consider stop tweeting so often, but it’s been clear that President Donald Trump will do whatever he wants no matter what his wife may suggest."

You just have to wonder what she’s thinking through all this. Because it’s obviously a message she is committed to delivering  even though she knows that there are charges of hypocrisy.

As the First Lady was speaking, the president fired off a couple of tweets in which he––again–– disparaged former CIA Director John Brennan, whose security clearance Trump pulled last week out of political spite, as well Special Counsel Robert Mueller's investigation, reverting to calling it a "rigged witch hunt."

Social media had mixed reactions to the First Lady's speech.

"Until she addresses her husband's cyber-bullying, I'm not listening to a word," one user said.

@ABC No thanks. Until she addresses her husband's cyberbullying, I'm not listening to a word. She's meaningless.
— karen munro (@karen munro) 1534771708.0

It was a pretty common sentiment.

Others recalled the "I don't really care, do u?" jacket the First Lady wore to visit detained migrant children who were apprehended at the U.S.-Mexican border, courtesy of her husband's cruel "zero tolerance" policy.