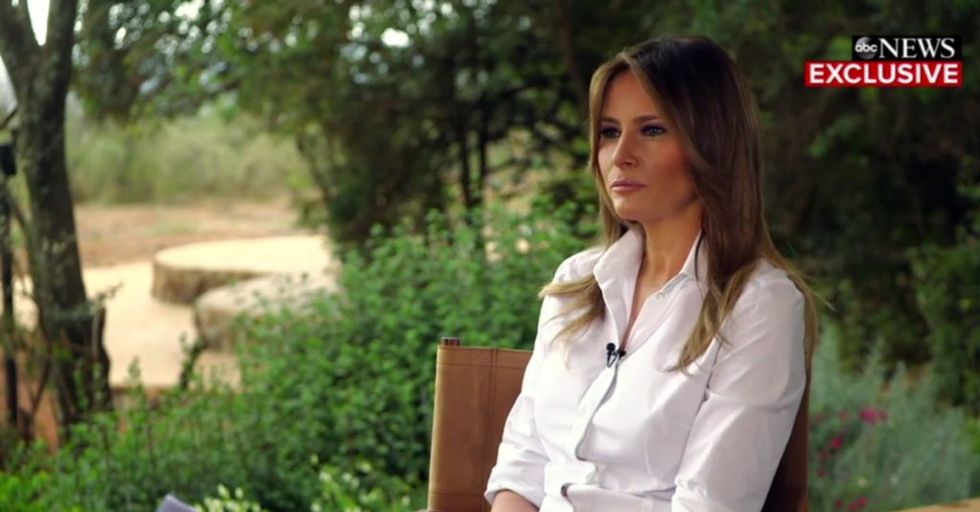 In an exclusive interview with ABC News, Melania Trump—third wife of President Donald Trump—revealed why she began her "Be Best" campaign to address cyber bullying. ABC News filmed the interview in Africa during her first solo international trip as First Lady.

Contrary to the assumptions of many, the FLOTUS' pet project did not arise from problems she saw with children being bullied on social media. Social media bullying contributes to the suicides of children throughout the United States.

Instead of child welfare, Trump stated her inspiration came from herself being the "most bullied person on the world."

The FLOTUS added her program hoped to teach children how to behave so they would know to not bully others when they are adults. Melania Trump stated:

"We need to educate the children of social emotional behavior so when they grow up and they know how to deal with those issues."

The fact First Lady Melania Trump's "Be Best" campaign revolved around ensuring children learned not to bully adults like her, instead of other children, drew criticism online.

@motheradamplay @ABC Narcissism at its worst. It is about them every minute of every day
— Deb Schadlick (@Deb Schadlick) 1539257112.0

Some brought up the First Lady's recent comments about sexual assault victims.

A few made the distinction between bullying and getting backlash for poor personal choices, like demanding to see President Barack Obama's birth certificate or wearing a jacket that says "I don't really care, do you?" when going to see children separated from their parents being held in detention facilities.

@AdavisWilliams @ABC Birtherism disgusts me to no end. Let's keep reminding people that Melania and her husband were a part of it.
— Color Me Purple (@Color Me Purple) 1539259187.0

While others took exception to the Flotus' characterization of her own situation.

People questioned her claim of being the "most bullied person on the world."

@Idess_HaloStar @ABC @ChelseaClinton is gracious and dignified. @KellyannePolls could learn from her.
— Julie Lynn (@Julie Lynn) 1539256997.0

Watch ABC News teaser for their full interview here, including the First Lady's full comment on her inspiration for "Be Best."