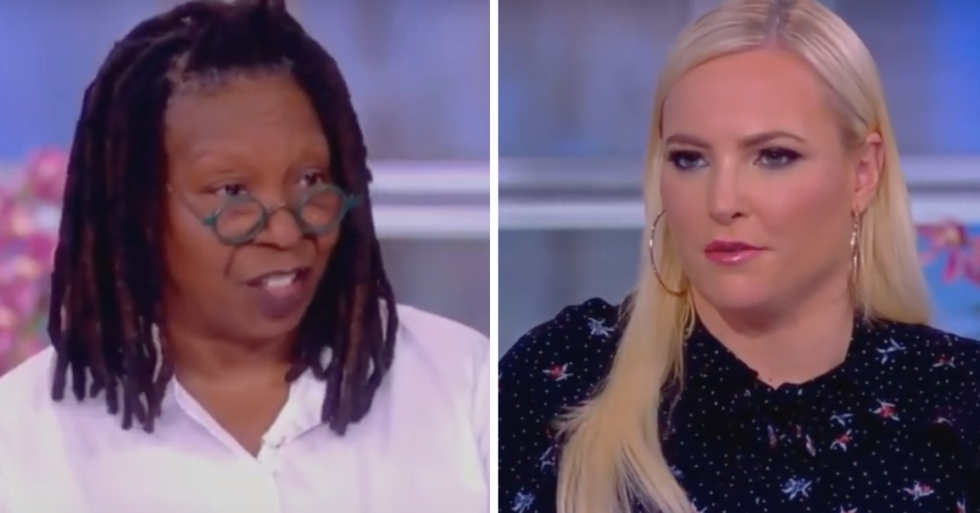 Whoopi Goldberg stepped in and rebuked her co-host Meghan McCain for her views on abortion during a contentious moment on The View.

It all began when McCain dismissed actress Alyssa Milano’s call for a “#sexstrike” in protest of Georgia’s new law banning abortions if a fetal heartbeat can be detected, saying “people like Alyssa Milano need to understand…women aren’t just one section of the population like her. I feel like pro-life women are completely left out of conversations like this.”

McCain and Joy Behar proceeded to debate their opinions on when human life begins and whether the Georgia bill violates women's' right to bodily autonomy. Ana Navarro disputed McCain's point that pro-life women “feel left out of the conversation," saying that anti-abortion measures prohibit women from addressing the nuances with abortion.

“I think you have to understand for pro-life women like me—which is a strong tenet of who I am I and how I view the world—is I believe abortion is murder,” said McCain. “The idea there is grey in allowing murder in the United States of America…”

Whoopi Goldberg stepped in as the women continued to spar.

“That is your belief," she told McCain.

“That’s what I don’t want to do,” Goldberg said, adding:

“Don’t say ‘you don’t believe.’ That’s not what I’m saying. I’m saying I don’t believe that the minute you conceive, you’re with child. I believe a lot of things have to happen. The baby has to become [a] zygote. The problem for me is—I’m happy that you feel that way. I want everybody who feels that way to feel that way. What I don’t want is I don’t want anyone telling me what I have to feel.”

You can watch the exchange in the video below:

McCain was criticized for what critics say is a simplistic view of a far more complex issue.

@TheView And she’s off! @MeghanMcCain shaking her head in disbelief because they have to to break before she can ra… https://t.co/Ri7jKBhTap
— Christine (@Christine) 1557760461.0

Goldberg has been open about her own experience with abortion: She had a back-alley abortion at the age of 14. She wrote about the experience in an essay for the book The Choices We Made.

I found out I was pregnant when I was fourteen," she wrote at the time. "I didn't get a period. I talked to nobody. I panicked. At that moment I was more afraid of having to explain to anybody what was wrong than of going to the park with a hanger, which is what I did."