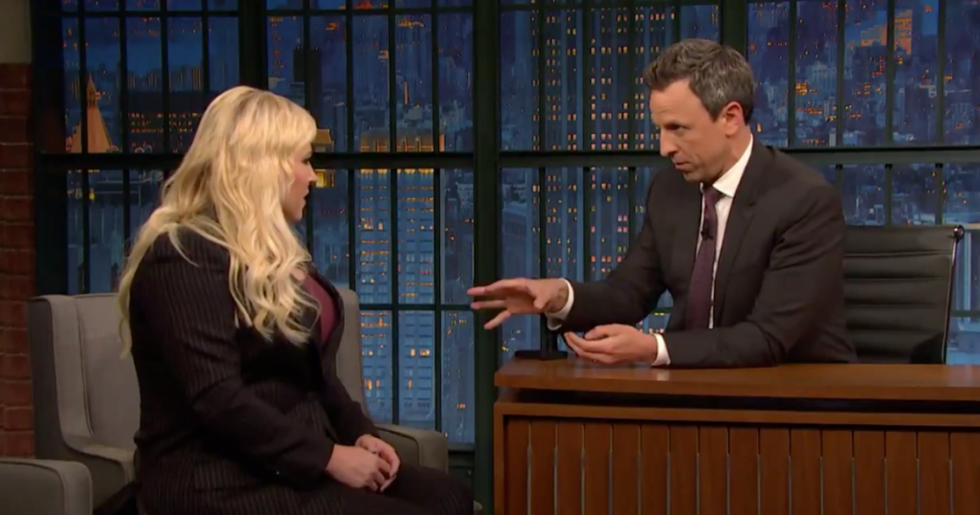 Things got heated on Tuesday night's episode of Late Night with Seth Myers when guest Meghan McCain was asked if she still stood by her comments about Congresswoman Ilhan Omar (D-MN).

Omar in March criticized the powerful pro-Israel lobby, which some interpreted as a swipe against Jews. Though she meant no offense, Omar later apologized. But McCain still tried to connect her to the synagogue shooting.

McCain accused Omar, a Somalian refugee and one of the first Muslim women elected to Congress, of promoting antisemitism that contributed last month's shooting at the Chabad of Poway synagogue in California.

"When we’re having conversations about anti-Semitism, we should be looking at the most extreme on both sides," McCain said on This Week with George Stephanopoulos in April. "I would bring up Congresswoman Ilhan Omar and some of her comments that got so much attention, and in my opinion Nancy Pelosi wasn't harsh enough on her for trafficking in anti-Semitic language, talking about, ‘All about the Benjamins,’ and how Jewish people had 'hypnotized' the world."

On Tuesday, Myers tried to get McCain to clarify whether she still believes Omar is anti-Semitic.

Here's Meghan McCain being grilled by Seth Meyers by using her own words and a lesson to everyone in how to conduct… https://t.co/9XfRMvOIOA
— Alejandro (@Alejandro) 1557339909.0

“You ... brought up her tweets again in the context of that shooting,” Meyers said. “I do think it’s fairly dangerous and you brought it up after Congresswoman Omar had also had some death threats against her. She’s obviously now stated she needs to be more careful with her language. Don’t you think people who talk about her need to be a little bit more thoughtful as well? Or do you stand by those comments of tying her rhetoric to the synagogue shooting?”

“I don’t think I tied her to it in particular,” McCain replied. “I think that I’m calling out what I see as anti-Semitic language.”

“But you called it out after she’d apologized for it," Myers interjected. "I do want to establish the timeline.”

McCain said that "the Democrats are hedging on this, and I think it’s very dangerous, and I think Chuck Schumer and I are in alignment about Israel’s stance in geopolitical politics" and that "it’s of the utmost importance."

McCain then suggested without evidence that Omar "is bringing her party to the extreme, to the extremism on this."

McCain also expressed concern over the resurgence of antisemitism in Europe. “I see it happening over there and I worry about it happening here," she said. "I stand by every single thing I’ve said, and if that makes me unpopular in this room or in front of you, so be it.”

The discussion intensified when McCain asked Myers if Omar's remarks about 9-11 - the controversial "some people did something" line that was taken out of context - offended him.

“Would you give President Trump the same leverage if he had said the same thing?” McCain asked.

Recall that after 9-11, Trump bragged about having the tallest building in lower Manhattan and claimed, without proof, that he saw Muslims cheering in the streets in New Jersey:

Myers said that "Donald Trump is certainly in no position to criticize her language on 9/11 based on the things that he’s said about 9/11, right?"

“Let me make the clarification between Donald Trump and Ilhan Omar, is one of them has apologized and said they’re gonna try to do better and they’re going to be educated by people who know about this, that’s what she said. It’s an interesting thing when we have two Muslim women for the first time [in Congress], they do have a different perspective on things, and when we talk about ‘let’s try to meet in the middle on things,’ we have to listen to other people’s perspectives.”

McCain then tried to rehash Omar's comments but Myers shut her down.

“You do keep bringing up the two tweets that she’s apologized for and I think that’s a little unfair to her, especially because we’ve established—"

Myers said that he is “just someone who cares about the fact that there’s someone out there who is in a minority who has had death threats against her" and that he was trying to find "common ground" with McCain.

“I’m perfectly happy with everything that’s coming out of your mouth and I like that we spent this time together,” he told her.

After the interview, Ben Domenech, McCain's husband, blasted Myers on Twitter for questioning his wife with "idiotic anti-Semitic bullsh*t."

Overall, however, Myers' grilling of McCain was appreciated.