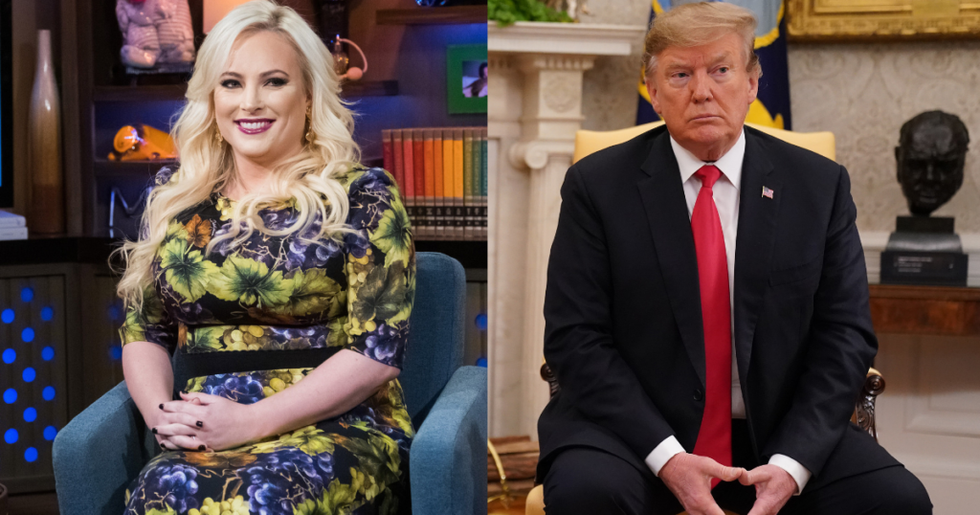 President Donald Trump proclaimed Tuesday as National Former Prisoner of War Recognition Day and his announcement is earning fierce ridicule because of his treatment of the late Senator John McCain (R-AZ).

"We honor the Americans captured and imprisoned by foreign powers while carrying out their duties to defend this great Nation," Trump wrote in a statement. "As a Nation, we must never forget or take for granted the traumatic ordeals of our former POWs.  With honor and valor, they served to keep our country safe, and they stayed the course — despite conditions that were often harsh and agonizing."

McCain spent five years as a POW in Vietnam and had his military service routinely mocked by Trump, even after his death last August.

Trump, who avoided the draft, famously said in 2015 that McCain was a war hero solely because he was captured. "I like people who weren't captured," Trump said, three weeks into his White House bid.

Meghan McCain, the Senators eldest daughter, immediately called out Trump for his abysmal treatment of her father.

"No one believes you care about prisoners of war and 'people who get captured.'"

@MeghanMcCain He said without hesitation that he does not like people who were captured. Those were the words of… https://t.co/ew0bBcN3h0
— Thomas DeBarr (@Thomas DeBarr) 1554827661.0

Trump is a wizard at undermining himself.

@realDonaldTrump Except for John McCain. He got caught right? Will you be doing a 'National Former Couldn't Enlist… https://t.co/rAvLJIBL2l
— Tony Cronin (@Tony Cronin) 1554828221.0

@realDonaldTrump Seriously? You either have the single largest set of cojones known to man, dementia or absolutely… https://t.co/paptO0t7AL
— Sarah Dennis (@Sarah Dennis) 1554832474.0

Trump continues to McCain for the Russia investigation, which he claims was started because of a dossier authored by former MI6 agent Christopher Steele, hired at the behest of Fusion GPS. In reality, it was Trump's firing of then-FBI Director James Comey that prompted the appointment of Special Counsel Robert Mueller. Additionally, nothing in the Steele dossier has been disproven.

"So it was indeed (just proven in court papers) “last in his class” (Annapolis) John McCain that sent the Fake Dossier to the FBI and Media hoping to have it printed BEFORE the Election. He & the Dems, working together, failed (as usual). Even the Fake News refused this garbage!"

Trump maintains his refusal to release his own college transcripts.

Last month, Trump dredged up his grudge against McCain for voting down a repeal of the Affordable Care Act in 2017.

"Spreading the fake and totally discredited Dossier 'is unfortunately a very dark stain against John McCain,' Ken Starr, Former Independent Counsel. He had far worse 'stains' than this, including thumbs down on repeal and replace after years of campaigning to repeal and replace!"

Trump was not invited to McCain's funeral, and in March he lamented the fact that no one ever thanked him for allowing the service take place at the National Cathedral in Washington.

"I endorsed him at his request, and I gave him the kind of funeral that he wanted, which as President I had to approve," Trump said in a speech in Ohio. "I don't care about this. I didn't get thank you. That's OK. We sent him on the way. But I wasn't a fan of John McCain."

Trump's permission was not needed, according to the National Cathedral.