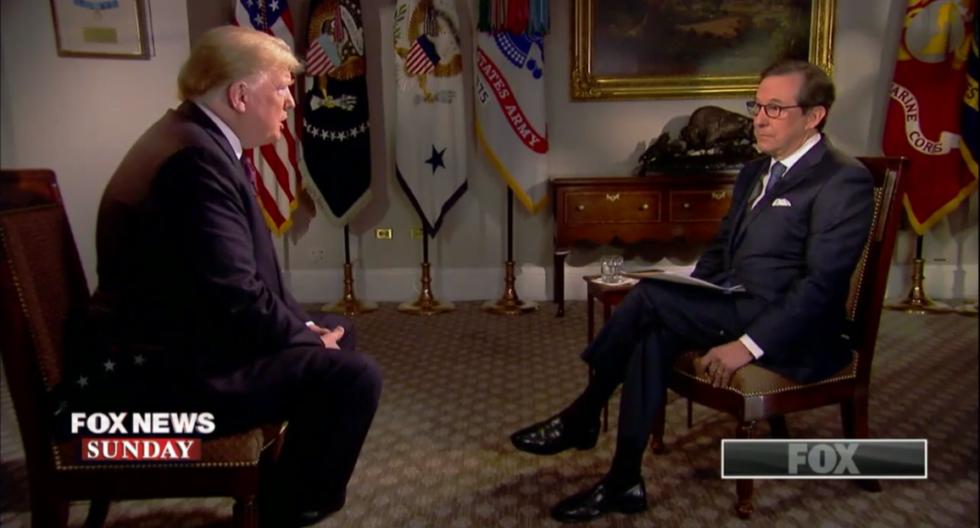 President Donald Trump sat down with Fox News correspondent Chris Wallace on Fox News Sunday to talk about a wide range of topics. Included were some of the criticism Trump received over his attacks against the press, calling them "the enemy of the people" repeatedly and targeting certain networks in his Make America Great Again rallies.

Many people spoke out about the Trump administration's handling of the situation with CNN's Jim Acosta, especially White House Press Secretary Sarah Sanders sharing an altered video from Infowars affiliate Prison Planet to justify their actions. Since it was a major story, Wallace attempted to ask the President about it.

Among those speaking out when Trump first characterized the press as "the enemy of the people" was 37 year Navy veteran, retired Admiral Bill McRaven, former head of United States Special Forces and the man in command when US Navy SEALs eliminated Osama bin Laden.

In February 2017, during a speech at the University of Texas Austin, UT System Chancellor and retired Admiral Bill McRaven stated the President's description of the media as "the enemy of the American people" must be challenged and "this sentiment may be the greatest threat to democracy in my lifetime."

On Sunday, Wallace tried to ask Trump about his attacks on the press, but the President continually spoke over Wallace. Finally, the veteran newsman asked:

"Can I bring the bigger issue up?"

After getting a yes from Trump, Wallace tried to repeat McRaven's words, but was repeatedly interrupted by Trump. Wallace began:

Wallace attempted to continue where he left off, repeating:

Wallaced ignored the interruption and continued:

"...who lead the operations, commanded the operations that took down Saddam Hussein, and that killed Osama bin Laden says that your sentiment is the greatest threat to democracy in his lifetime."

Rather than address his own sentiments about the press and the implications regarding the First Amendment and the US Constitution, the President chose to attack Admiral McRaven and the Navy SEALs for their "failure" to kill Osama bin Laden sooner.

"OK, he’s a Hilary Clinton backer and an Obama-backer and frankly..."

To summarize, Trump has attacked the President who ordered the bin Laden operation, taken away the security clearan… https://t.co/rKAb8GrFMk
— Ben Rhodes (@Ben Rhodes) 1542582657.0

"I did not back Hillary Clinton or anyone else. I am a fan of President Obama and President George W. Bush, both of whom I worked for."

"I admire all presidents, regardless of their political party, who uphold the dignity of the office and who use that office to bring the nation together in challenging times."

"I stand by my comment that the President's attack on the media is the greatest threat to our democracy in my lifetime. When you undermine the people's right to a free press and freedom of speech and expression, then you threaten the Constitution and all for which it stands."

Admiral McRaven tells me: “I did not back Hillary Clinton or anyone else. I am a fan of President Obama and Presid… https://t.co/Cp8XZRSedb
— Jake Tapper (@Jake Tapper) 1542568680.0

The President's attack against McRaven was not the first time Trump—who never served in the military after getting a medical deferment during the Vietnam War—attacked a military veteran's service record because they criticized him.

The President famously attacked the late Senator John McCain during a Trump campaign stop in Iowa. Then candidate Trump claimed McCain was only a hero because he was captured and that he preferred people who did not get captured.

Former colleagues of Admiral McRaven were quick to come to the defense of the 37 year United States Navy veteran.

Adm Bill McRaven is a friend & former @WhiteHouse colleague, he is among the finest officers I have had the privile… https://t.co/IUcvhWtvZ8
— Frances Townsend (@Frances Townsend) 1542590025.0

.⁦@jameshohmann⁩: “Donald Trump’s insults of war heroes and military families who criticize him are a feature, not… https://t.co/XGP60VDXLG
— Jake Tapper (@Jake Tapper) 1542637807.0

Veterans spoke out as well.

In attacking the service of Admiral William McRaven, a decorated Navy SEAL who served his nation for 37 years,… https://t.co/tEp0bex5Je
— VoteVets (@VoteVets) 1542585907.0

The President did not directly address his attacks against Admiral McRaven or the Navy SEALs, but did post a proven false claim to his Twitter feed in an attempt to justify his statements.

Of course we should have captured Osama Bin Laden long before we did. I pointed him out in my book just BEFORE the… https://t.co/xbUMNwWgHj
— Donald J. Trump (@Donald J. Trump) 1542641199.0

The GOP however did address the remarks directly in a post where they reiterated Trump's claim.