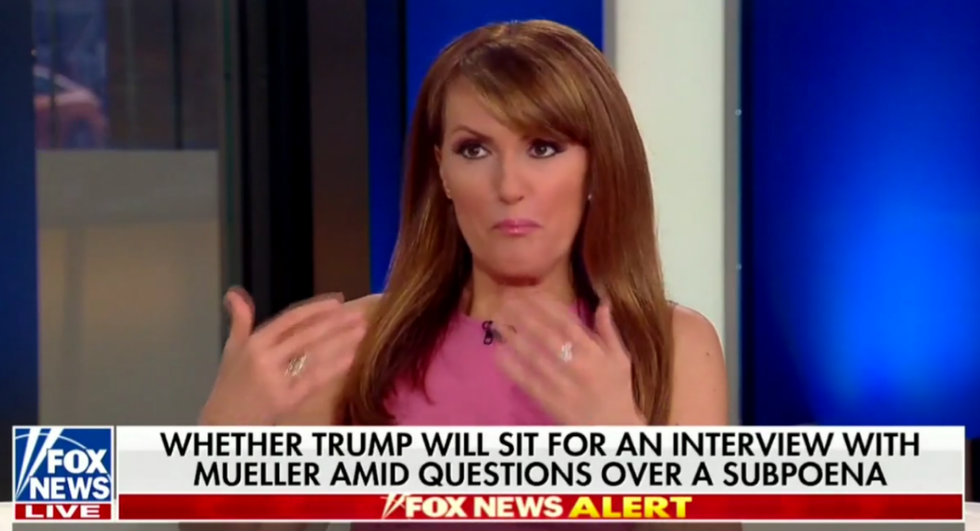 Monday, Fox News Outnumbered host Dagen McDowell sat down with Judge Andrew Napolitano and other guests to discuss the possibility of President Donald Trump sitting for an interview with Special Counsel Robert Mueller as part of the Russia investigation.

Napolitano, like most other legal experts, advised against Trump agreeing to an interview under oath.

McDowell concurred, but for an interesting reason. She first asserts interviewing the President is a trap he cannot avoid. She stated:

"From the outside looking in doesn’t it look like increasingly that the Mueller team is setting a trap for the president if he decides to speak with them?"

And the spring for that trap? McDowell suggests Trump is incapable of speaking to Mueller without committing perjury.

How in the world could he ever cooperate and sit down with Mueller for an interview knowing that if you tell one lie to Bob Mueller, he will move to file charges?"

But guest Jessica Tarlov offered another option for the President. Trump could sit for the interview and not lie. She stated:

He could not tell a lie, that's always an option here. There have been so many lies from the beginning."

Tarlov went on to list some of the statements Trump made related to the Mueller investigation that proved untrue or were contradictory to other statements the President made.

Like the evolving story of the Trump Tower meeting where Donald Trump Jr. and Jared Kushner spoke with at least one Russian government operative. Or the related story of Trump Jr.'s false statement about the meeting, dictated by the President on Air Force One.

Or the changing story of the payment made to Stephanie Clifford—a.k.a. Stormy Daniels—and the proposed payment to Karen McDougal. Or the inconsequential but no less prevalent lies about inauguration crowd sizes or winning the popular vote.

The President's moral character even led to 7 religious and civic leaders in Washington DC petitioning for Trump to have his liquor license for Trump International Hotel revoked. They also cited statements made by the President which proved untrue.

McDowell is correct in stating that lying under oath or as part of a criminal investigation is discouraged. And her assertion that Trump would inevitably perjure himself has some merit.

Various organizations tracking Trump's public lies while in office now put the total over 4,200. These count only official statements, speeches and Twitter posts.

Following McDowell's on-air assessment of the President's honesty, Twitter users had much to say on the matter as well in the following tweets.

Some echoed Tarlov's suggestion that Trump just not lie.

While others found in insightful that a host on Fox News thinks the President cannot tell the truth under oath or as part of a criminal investigation for even a short period. Sources state the Trump interview would be one to two hours long at most and include written questions.

@atrupar @dagenmcdowell YOU CAN'T MAKE THIS STUFF UP!!! So basically, she's saying Trump is stuck between his natu… https://t.co/HUI9KXmJeu
— Sandon Jacobs (@Sandon Jacobs) 1533737600.0

@atrupar @dagenmcdowell I love that she assumes that he will naturally lie
— Bunny Colvin (@Bunny Colvin) 1533735051.0

Some found it especially telling when someone else managed to not perjure themselves after 11 hours.

The President's lawyer, Rudy Giuliani, stated again on Monday that he advised Trump to not speak to Mueller. Giuliani did not specify if the President's legal team thinks Trump will inevitably commit perjury.