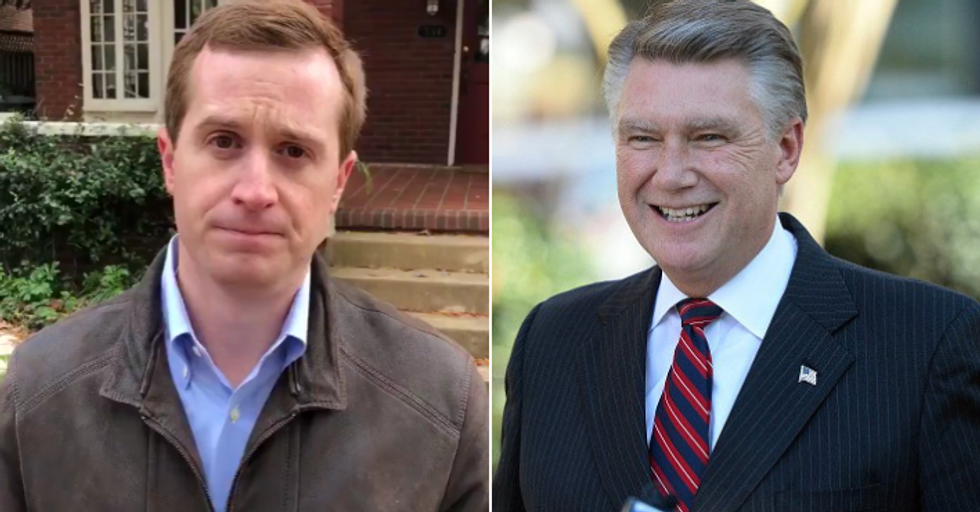 The winner for the 9th congressional district in North Carolina was declared in November, about 24 hours after polls closed. The Democratic candidate, Dan McCready conceded the election to his Republican rival, Mark Harris.

But now McCready has rescinded that concession.

In an interview on Charlotte, North Carolina TV station WSOC, McCready first made the announcement. The candidate later went to Twitter to alert voters of his decision.

"I didn’t serve overseas in the Marines to come home to NC and watch a criminal, bankrolled by my opponent, take away people’s very right to vote."

"Today I withdraw my concession and call on Mark Harris to end his silence and tell us exactly what he knew, and when."

I didn’t serve overseas in the Marines to come home to NC and watch a criminal, bankrolled by my opponent, take awa… https://t.co/ohtcKP7nM6
— Dan McCready (@Dan McCready) 1544135571.0

So what prompted McCready's change of heart?

Mounting evidence of voter fraud with possible ties to the Harris campaign began to emerge last week. In his video on Twitter McCready stated:

"Last week we began to learn about shameful criminal activity, bankrolled by my opponent, to take away North Carolinians very rights to vote."

Suspicions were aroused when an unusual number of absentee ballots from two counties that might favor the Democratic candidate were never returned. Residents with missing ballots stated their ballots had been collected.

Then last week, three individuals came forward to state they were hired to collect absentee ballots—an illegal act—by a representative of Republican candidate Mark Harris. Harris has yet to comment on the matter.

Harris lead McCready by just 905 votes, 49.4% to 48.8% after all submitted ballots were counted. McCready called on Harris to comment on the controversy and assured the people of NC-09 that he will pursue answers about what happened to their votes.

Just got off with @maddow talking about why it’s clear that North Carolinians in #nc09 had their voices silenced. M… https://t.co/WPHBg5MueK
— Dan McCready (@Dan McCready) 1544150934.0

People are shocked and outraged over the revelations.

And McCready garnered support for his decision to rescind his concession in the midst of the ballot fraud allegations against the Harris campaign.

Some called on President Donald Trump to denounce the man he endorsed—Mark Harris—and support McCready if he cares about voting fraud like he claimed in the past.

North Carolina GOP officials stated they were open to a new election "if necessary." But some people do not think Harris should be on a ballot and McCready should be declared the winner.

@McCreadyForNC @maddow As far as I'm concerned, there should NOT be a new election. This is YOUR WIN. Harris should be disqualified.
— Hope4Humanity (@Hope4Humanity) 1544184759.0

@McCreadyForNC @maddow You probably won the election. There needs to be a thorough audit of this election to find o… https://t.co/nK1mhDgHSK
— Postal Truth (@Postal Truth) 1544168891.0

People who said they were hired to collect absentee ballots pointed to McCrae Dowless, working on behalf of GOP candidate Harris. Dowless has a felony record and convictions for perjury and financial fraud. This is not the first time Dowless was hired to work on a GOP campaign.

@McCreadyForNC @maddow Mark Harris, like any other criminal, should never ever be rewarded with the fruit of his cr… https://t.co/6CFzzscGfO
— Tamra Temple (@Tamra Temple) 1544153854.0