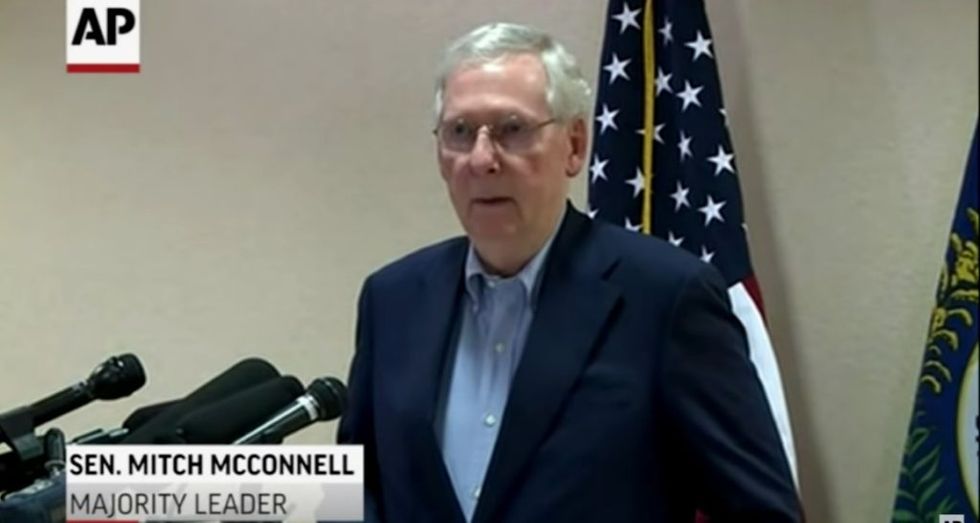 Unlike some of his colleagues and the President, McConnell stopped short of stating protesters were paid to protest. However he did say they were clearly "trained" based on how well they did.

In organizing protests, it is common practice to let people know what to expect and what they could and should not do. Many of the most effective protests probably did benefit from shared knowledge.

However McConnell, like his fellow members of the GOP, intended to imply the protesters were not there to express their own views and opinions, but rather were paid to victimize the Republican Party by rich liberal leaders. That narrative dominated statements made by numerous members of the GOP for the last several weeks.

The Congressperson as victim to the voice of their constituents was further emphasized by McConnell's choice of words in his opening statement. He said:

"I couldn’t be prouder of the Senate Republican Conference... we were literally under assault."

"These demonstrators, I’m sure some of them were well-meaning citizens. But many of them were obviously trained to get in our faces, to go to our homes up there. Basically almost attack us in the halls of the capitol. So there was a full-scale effort to intimidate..."

Considering the reason many people protested—the multiple sexual assault allegations against Kavanaugh—the Senate Majority Leader's choice to use the word "assault" to describe his own situation angered many people.

No one plays victim better than a multi-millionaire, who stole a judicial seat from a twice elected patriot like Ba… https://t.co/VETJXwmPDZ
— #𝙍𝘼𝙉𝘿𝙔𝙍𝙀𝙎𝙄𝙎𝙏 🐝🆘 (@#𝙍𝘼𝙉𝘿𝙔𝙍𝙀𝙎𝙄𝙎𝙏 🐝🆘) 1539030811.0

People were not sympathetic to the GOP Senate leader's plight.

Some did not seem to want to hear anything McConnell had to say.

@thehill How do you think victims of sexual assault feel! Especially when they tell their truths and they are not b… https://t.co/zn9Ogc1Yvl
— Barbara Maschino (@Barbara Maschino) 1539024894.0

@thehill Did he ever consider that people were literally angered and outraged at the nomination, the nominees chara… https://t.co/Lz42LGMskB
— Debra Jenkins (@Debra Jenkins) 1539025728.0

McConnell's claims of being assaulted were not his only statement about reactions to Kavanaugh that did not go over well with the public. On Saturday, McConnell said anger over Kavanaugh would "blow over".

McConnell said "these things always blow over." Which leads me to make the easiest prediction I've ever made on cab… https://t.co/sVWVQS2Gli
— Brian Stelter (@Brian Stelter) 1538917331.0

The Senate Majority Leader's current Senate term ends in 2020. McConnell held meetings in June of this year which indicate he intends to run again.

The 2018 midterm elections are slated for Tuesday, November 6.