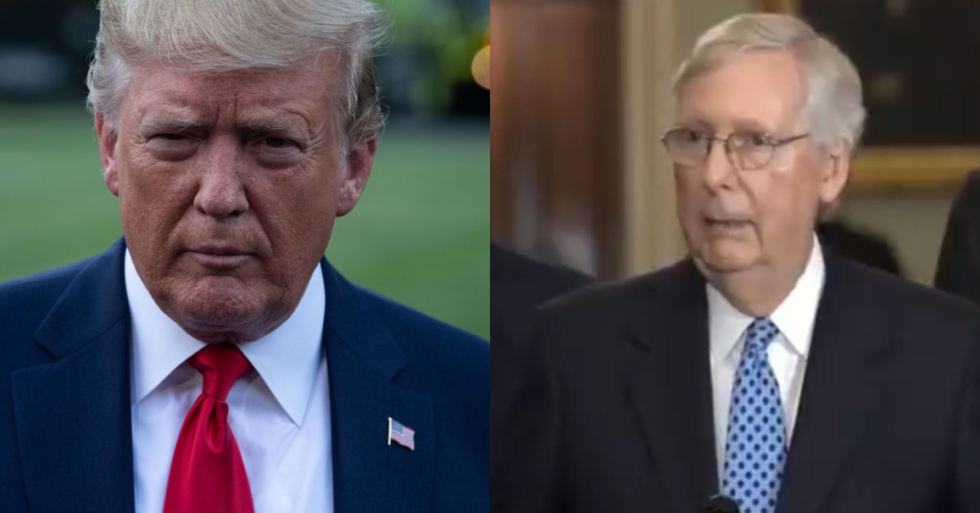 The cracks between President Donald Trump and his more ardent supporters continue to widen as the impeachment inquiry progresses. On Tuesday, Senate Majority Leader Mitch McConnell of Kentucky contradicted a claim Trump made.

Asked by a reporter about a claim by the President that he had exonerated him for his call with Ukrainian President Volodymyr Zelensky, McConnell was quick to correct them.

.@senatemajldr effectively says Trump made up his story on him and McConnell discussing the "perfect" phone call on… https://t.co/QHOagz01AX
— Oliver Willis (@Oliver Willis) 1571769822.0

Not only did GOP Senator McConnell state he didn't tell the President his Ukrainian phone call was "perfect," he also said no discussion with the President about the call ever took place.

The denial and contradiction are a departure for McConnell. And with his closest allies seemingly abandoning him, some wondered how Trump would react.

Others commented on Trump's odd choice of words to describe his call.

Others questioned who was more believable.

While many wondered what took McConnell so long.

@owillis @Acyn @senatemajldr Whoever thought they could work with Trump and not get thrown under the bus at some po… https://t.co/WMlxBqmA1F
— Evelyn Stack (@Evelyn Stack) 1571773576.0

@owillis @Shareblue @senatemajldr as is the population, the divide in the GOP party is showing they too have had en… https://t.co/CDXvoCLPJR
— eightytunes (@eightytunes) 1571772645.0

But some thought the turnaround had more to do with McConnell's reelection bid in 2020 and current poll numbers for both the President and the Kentucky Senator.

@owillis @senatemajldr McConnell is probably annoyed with Trump's bullshit, as it makes it more difficult for him to be seamlessly evil.
— Allison F.🦉 (@Allison F.🦉) 1571769899.0

Whatever the reasoning, McConnell demonstrated that the GOP leadership is no longer in lock step with President Trump. What that means for the impeachment inquiry remains to be seen.

The book How Democracies Die is available here.