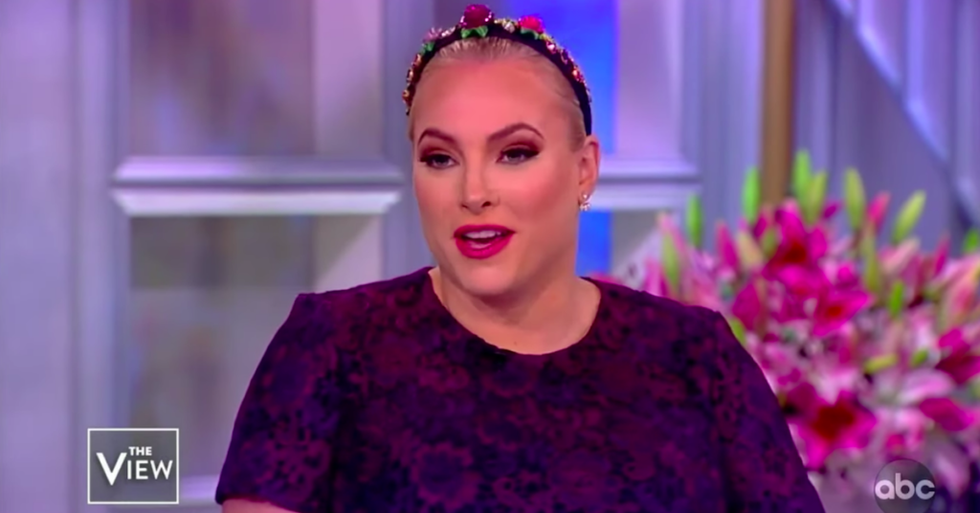 It is no surprise that the ladies of The View are not fans of President Donald Trump. Liberal hosts Whoopi Goldberg, Joy Behar and Sunny Hostin remain on brand while conservative pundit Meghan McCain has a more personal reason—related to the President's treatment of her father—for disliking Trump.

The day after the President held a MAGA rally in Orlando, Florida to officially launch his next presidential campaign, the hosts discussed the similarities between the campaign rhetoric of 2016 and the 2020 campaign launch.

Hostin remarked she thought it was a rerun of a rally from 2016 since the promises made by Trump—get Hillary Clinton complete with chants of "lock her up," building a wall with chants of "build that wall" and attacks against the DNC—and then Behar questioned how the same rhetoric and promises from 2016 could still appeal to Trump supporters.

McCain—who stated she watched the Orlando MAGA rally only because it came on before Housewives—explained the appeal of President Trump for his base.

"It's not just that they love Trump so much. It's that they hate the same things Trump hates."

When pressed by Behar for who or what they both hated, McCain refused to answer. But many thought McCain hit the nail on the head with the President's core base.

Hate and fear are a powerful motivator.

But—according to McCain from a prior episode of The View—even those Republicans who dislike Trump are not going to vote for anyone but a Republican.

But Twitter user Austin Swafford went a step further. It is not about love at all. It is all about hate.

"I'd argue they don't even love Trump. They just love that someone expresses the same hate and anger they feel."

"[Republican strategist Rick Wilson] is right - Trump is a vessel for their anger and hatred. And they feel it so strong that they don't see that Trump doesn't even care about these things!"

"Trump doesn't care about immigrants or abortion or steel mills or Iran or anything else he's going crazy about."

"He just knows his audience and how to whip them up. He cares about money and good press. That's it. That's why his harshest words are reserved for reporters."

@ParkerMolloy 🤷‍♂️ I honestly don’t know of anything Trump hates that I also hate. I like common sense, diversity,… https://t.co/MKKPfkNs7L
— SirDidymus (@SirDidymus) 1560998405.0

Sacramento Bee columnist Marcos Breton articulated the message from McCain. There is no point to trying to appeal or convert core Trump supporters or even those Republicans loyal to party above all else.

"Trying to convert Trumpers is a waste of time. We don’t need to wonder why people support him. We should know by now. He’s a symptom of a disease in our culture. All Trump did was exploit the disease for his personal gain."

@ParkerMolloy Trying to convert Trumpers is a waste of time. We don’t need to wonder why people support him. We sho… https://t.co/CPsa5ntRuR
— Marcos Breton (@Marcos Breton) 1560976489.0

The majority, about 38 percent identify as independents, not loyal to any one political party. The win in 2020 will depend on appealing to most of those voters instead of chasing after voters loyal to their political party.

Watch the entire segment from The View here.

Republican strategist Rick Wilson's book, Everything Trump Touches Dies: A Republican Strategist Gets Real About the Worst President Ever, is available here.

A behind the scenes look at The View, Ladies Who Punch, is available here.