Trump's Treasury Secretary Just Had Another Epic Encounter With Maxine Waters, and Did He Really Just Try to Explain to Her How to Adjourn a Committee Hearing? 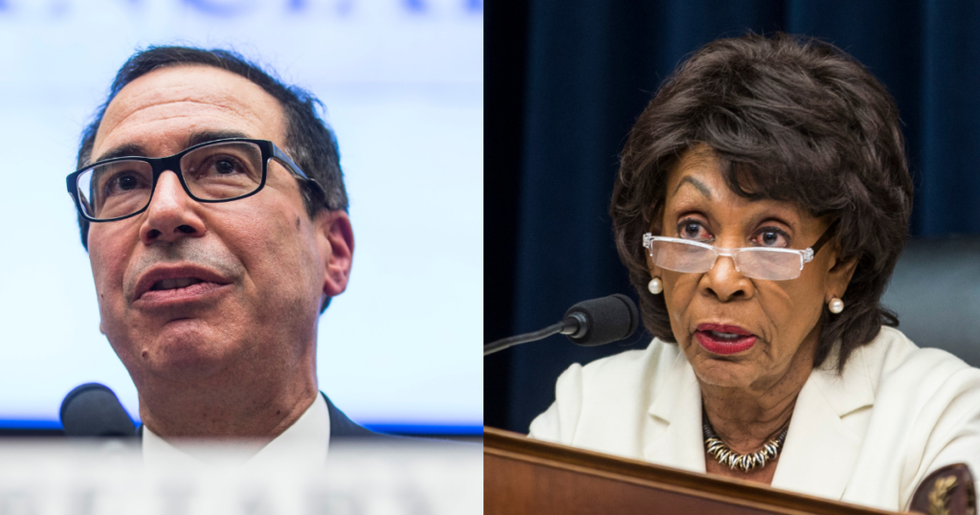 The fight for President Donald Trump's tax returns heated up on Tuesday when Treasury Secretary Steven Mnuchin tried to tell Representative Maxine Waters (D-CA), who chairs the House Financial Services Committee, how to do her job.

Mnuchin was annoyed that his time before the committee was cutting into an "important" meeting he had scheduled and threatened to never return if he was required to stay. Waters then said that if Mnuchin wished to leave, he may. Mnuchin pressed Waters on what that meant until the exchange became heated, with him accusing her of forcing him to stay by giving him the option to leave.

“You’re instructing me to stay here,” he said.

“No,” Waters replied. “You just made me an offer.”

“No, I didn’t make you an offer,” Mnuchin insisted, despite having literally made an offer to stay.

“You made me an offer that I accepted,” responded Waters.

Mnuchin then demanded Waters use her "gravel [sic]" to dismiss everyone.

“Please dismiss everybody. I believe you are supposed to take the gravel and bang it," a visibly frustrated Mnuchin ordered.

“Please do not instruct me as to how I am to conduct this committee,” Waters replied.

Maxine Waters: "no other secretary has ever told us the day before that they were going to limit their time." Mnuch… https://t.co/PvYq4u1pvF
— Amee Vanderpool (@Amee Vanderpool) 1554851679.0

Who does Mnuchin work for again?

To be clear, Mnuchin is paid with taxpayer money and Rep. Waters is representing the taxpayer in this exchange. https://t.co/3gdihuriNa
— shifty schiff (@shifty schiff) 1554847804.0

Some are wondering if Mnuchin would have treated a white man as disrespectfully as he did Waters.

Mnuchin trying to instruct Maxine Waters on how to use her gavel is not surprising to most women, least of all wome… https://t.co/2AHtNNoT36
— Amee Vanderpool (@Amee Vanderpool) 1554898429.0

Even Tom Arnold was not having it.

This was not the first time Waters and Mnuchin have publicly sparred. In 2017, Waters' patience wore out as Mnuchin - just like on Tuesday - refused to respond to a letter requesting information on Trump.

"Reclaiming my time," Waters began repeating while Mnuchin proceeded to speak over her.