She went all in. 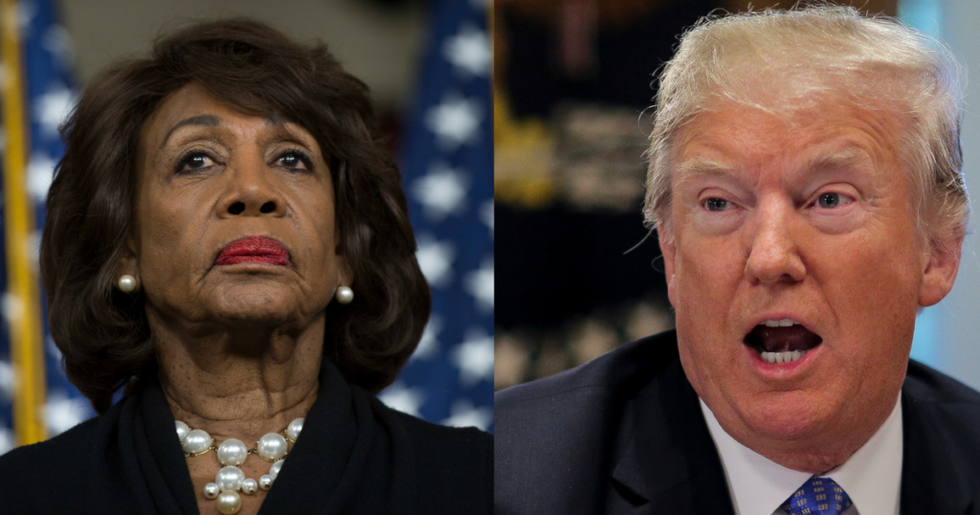 Congresswoman Maxine Waters (D-CA) blasted President Donald Trump in a Twitter tirade on Tuesday, urging the American people to not be distracted by Trump's whining and diversionary insults lobbed at his detractors.

The California Democrat and stalwart Trump critic began by iterating her focus: taking Trump down.

"Trump thinks he can distract us w/ his unhinged rants, meltdowns, and name calling at his rallies. Not me," Waters wrote. "I'm focused on his obstruction of justice, collusion w/ Russia, conspiracy, and jail time."

Trump recently referred to Waters as an "extraordinarily low IQ person," and warned her to be "careful what you wish for" after she encouraged Americans to confront and heckle members of the president's administration.

Waters continued, penning the hashtag #ConManDon to reference the president. The Congresswoman tore into Trump's family separation policy along the U.S.-Mexican border.

Let's not allow #ConManDon to divert our attention from the outrageous consequences of his zero tolerance policy. Roughly 500-600 children remain separated from their parents. We must reunite the families.

Let's not allow #ConManDon to divert our attention from the outrageous consequences of his zero tolerance policy. R… https://t.co/tvSUenl2KW
— Maxine Waters (@Maxine Waters) 1534262764.0

Waters then accused Trump and his lawyer, Rudy Giuliani, of playing games with the prospect of Trump sitting down for an interview with Special Counsel Robert Mueller. Trump's legal team has been in a back-and-forth with Mueller over what would be an appropriate line of questions for the president.

Waters believes it's all for show and that Trump will not end up speaking with Mueller - because the president is incapable of telling the truth.

"Don't believe for a second that Giuliani & Trump are honestly negotiating an interview w/ Mueller," Waters said. "Trump's lawyers never intended him to interview w/ Mueller b/c they know he would get caught in his lies and lying to the FBI is a crime. The president will never meet w/ Mueller."

Waters also ripped Trump's former campaign chair, Paul Manafort, for his effort to sell a Cabinet seat to a banking executive. Manafort is on trial for numerous financial crimes, including exploiting a bank CEO's desire to be Army Secretary as a means for getting millions of dollars in loans.

Waters didn't let Steve Calk, the CEO of Federal Savings Bank in Chicago, off the hook for wasting his customers' money.

Can you believe Federal Savings Bank's CEO forced through a $16 million loan for Paul "Money Laundering" Manafort all because the CEO wanted to be in Trump's swamp cabinet? How many small businesses could have benefitted from those funds?

@RepMaxineWaters Bad choice. They were the largest loans in the bank’s history and are now in default, likely to co… https://t.co/J3Grga4sbB
— Bruce Chanen (@Bruce Chanen) 1534264393.0

Social media overwhelmingly backed Waters, and the responses were golden.

"Something must be done" for the families the Trump administration has destroyed.

@RepMaxineWaters Auntie Maxine, they are refusing to allow people to help reunite families! Something must be done! https://t.co/C0xwNUc42z
— Christine Heath (@Christine Heath) 1534263586.0

How many Trump posts were bought? It's a fair question.

@RepMaxineWaters The next question is "How many positions were bought in this administration?"
— Sinclair (@Sinclair) 1534265625.0

And it's only Tuesday.