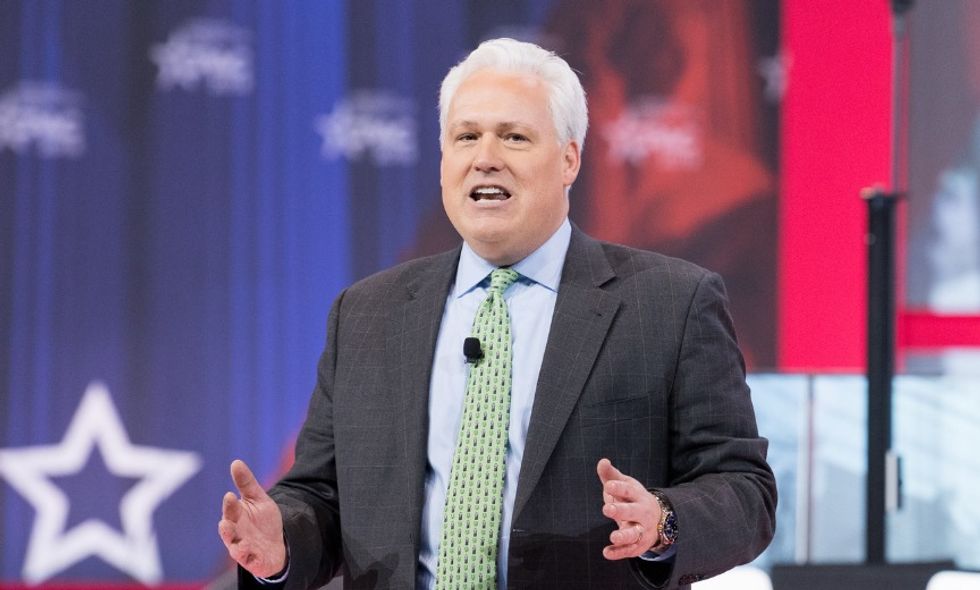 American Conservative Union chairman Matt Schlapp is getting pounded on Twitter for suggesting that Republicans' Supreme Court nominees get treated unfairly by Democrats.

Schlapp tweeted on Sunday that Supreme Court nominee Brett Kavanaugh's confirmation hearings have "transformed into a disgrace" and that "when Dems win their SC noms get an easy time, but ours get mauled."

This Kavanaugh confirmation has transformed into a disgrace. How is it when Dems win their SC noms get an easy time, but ours get mauled.
— Matt Schlapp (@Matt Schlapp) 1537748811.0

Kavanaugh is facing allegations of sexual misconduct from four women who claim to have been attacked by a heavily intoxicated Kavanaugh during his days at Georgetown Preparatory School and Yale University.

But to those on the political left, Schlapp's remarks are rank with hypocrisy. Senate Republicans refused to hold hearings for Merrick Garland, whom President Barack Obama tapped to replace the late Justice Antonin Scalia in 2016.

Scalia's seat was eventually filled by Neil Gorsuch, who was confirmed with Democratic votes after being nominated by President Donald Trump. The seat sat empty for more than a year.

Thus, the blowback against Schlapp was harsh.

Garland couldn’t get a hearing. Gorsuch was confirmed with Democratic votes. Are you Memento? https://t.co/lLWSsV0eDw
— Jon Lovett (@Jon Lovett) 1537751682.0

@SheldonBeatty Not only did they screw Garland, they put publically stated that they would hold Scalia's seat open… https://t.co/qh3I7PhmfM
— Dave Rohbock (@Dave Rohbock) 1537803940.0

McConnell changed Senate procedure with the “nuclear option,” eliminating the filibuster on Supreme Court nominees and changing the number of votes required for confirmation to 51, down from 60.

That left Scalia’s seat unfilled until Trump’s nominee Judge Neil Gorsuch was confirmed to the Supreme Court on April 1, 2017, by a 54-45 vote.

One activist has the receipts of Supreme Court justices appointed by Republicans that were nearly unanimously confirmed.

Schlapp took the bait. Notably, Clarence Thomas was accused of sexual harassment in 1991 by attorney Anita Hill, and still, he was ultimately confirmed.

Spoiler alert: Schlapp didn't get the response he intended.

@mschlapp So you're purposefully pretending like Americans have the memory of a flea by not mentioning Merrick Garl… https://t.co/5sg0SvnOXU
— Nick Nole-te (@Nick Nole-te) 1537800900.0

To add to the reasons Schlapp's tweet is ridiculous, prior to the 2016 election, Republicans threatened to deny Hillary Clinton a Supreme Court pick if she were elected president.

"If Hillary Clinton becomes president, I am going to do everything I can do to make sure four years from now, we still got an opening on the Supreme Court," Senator Richard Burr (R-NC) said in an audio recording in 2016.

“I promise you we will be united against any Supreme Court nominee that Hillary Clinton, if she were president, would put up,” Senator John McCain (R-AZ) said on the Senate floor in October 2016. “I promise you.”

Senator Ted Cruz (R-TX) suggested having eight justices instead of nine was no big deal.

"There is certainly historical precedent for a Supreme Court with fewer justices. I would note, just recently, that Justice Breyer observed that the vacancy is not impacting the ability of the court to do its job."

And On Monday, Graham doubled down.

Just as a reminder: Republicans in 2016 used the presidential election as an excuse to block Obama from nominating Garland. Schlapp and his GOP friends appear to have very short memories.