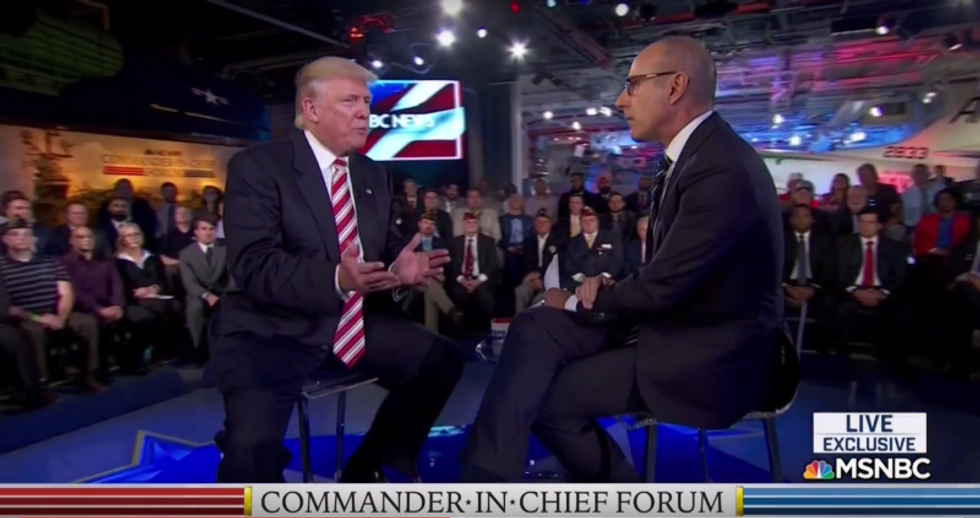 Journalists around the country leveled heated criticism at NBC's Matt Lauer after he failed to fact-check Trump on his claim that he did not support the Iraq war during Trump's appearance on Lauer's Commander-in-Chief Forum. When asked for examples of what he has done in his life that prepares him to "send men and women of the United States into harm's way," Trump was adamant: "The main thing is: I have great judgment,” he said. "I heard Hillary Clinton say I was not against the war in Iraq. I was totally against the war in Iraq. You can look at Esquire magazine from 2004. You can look at before that. And I was against the war in Iraq, I said it's going to totally destabilize the Middle East, which it has. It's been a disastrous war. And perhaps almost as bad was the way Barack Obama got out. That was a disaster."

Lauer did not correct the record. Fact checkers from Buzzfeed and Politifact were the first to unearth a transcript from Trump's 2002 appearance on The Howard Stern Show:

STERN: Are you for invading Iraq?

TRUMP: Yeah, I guess so. I wish the first time it was done correctly.

In fact, not only did Trump initially support the war, but Hillary Clinton suggested Trump would lie about his stance, pointing to the same Howard Stern interview earlier in the evening.

Lauer also failed to challenge Trump's claim that Hillary Clinton "made a terrible mistake in Libya" and his suggestion that he would have made a different decision. Trump's statements suggested that he opposed U.S. involvement to depose Libyan dictator Muammar Gaddafi in 2011. On the campaign trail, Trump has repeatedly claimed that he "would have stayed out of Libya," a statement which MSNBC has previously praised him for. But in a video blog about Libya in 2011, Trump said, “Gaddafi in Libya is killing thousands of people, nobody knows how bad it is, and we’re sitting around, we have soldiers all [around] the Middle East, and we’re not bringing them in to stop this horrible carnage… Now we should go in, we should stop this guy, which would be very easy and very quick.”

were predictive. "I had not taken seriously the possibility that Donald Trump could win the presidency until I saw Matt Lauer host an hour-long interview with the two major party candidates. Lauer’s performance was not merely a failure, it was horrifying and shocking..." he wrote. "Most voters, and all the more so undecided voters, subsist on a news diet supplied by the likes of Matt Lauer. And the reality transmitted to them from Lauer matches the reality of the polls, which is a world in which Clinton and Trump are equivalently flawed."

The Commander-in-Chief forum granted Lauer 30 minutes with each candidate, but Lauer spent nearly a third of his time with Hillary Clinton questioning her about her use of a private email server, including an inquiry into her decision to follow former Secretary of State Colin Powell's advice that Jonathan Chait alleges did not "move the ball forward on the question in any meaningful way":

The word judgment has been used a lot around you, Secretary Clinton, over the last year and a half. And in particular concerning your use of your personal email and pre– and server to communicate while you were secretary of State. You have said it’s a mistake.

You said you made not the best choice.

You were communicating on highly sensitive topics. Why wasn’t it more than a mistake? Why wasn’t it disqualifying if you wanna be commander-in-chief–?

Lauer spent so much time questioning Clinton about her emails that he rushed through subsequent queries, interrupting Clinton at several points to remind her that they were short on time. After an Army veteran in the audience asked Clinton to detail her plan to defeat the Islamic State, Lauer, noticing that time was almost up, interjected. “As briefly as you can,” he said.

Lauer's appearance on the forum was a precursor to the upcoming formal presidential debates set to begin on September 26, but his performance might be a sign that television moderators could face trouble, writes the New York Times's Michael M. Grynbaum, "balancing fairness with accountability." Interviewers could now face continued pressure to interrupt the prospective candidates for a fact check during prime time.