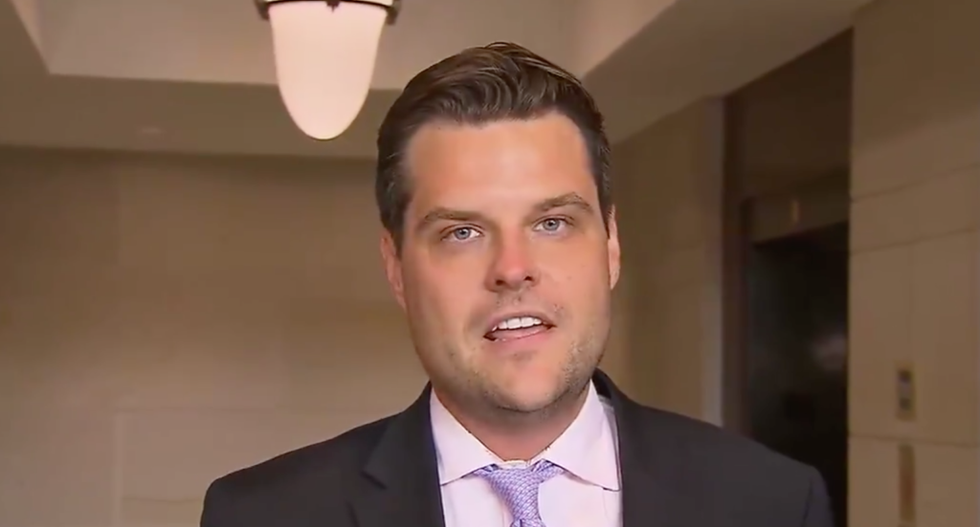 Florida Republican Congressman and devout supporter of President Donald Trump, Rep. Matt Gaetz, attempted to crash the closed-door testimony of former Trump deputy assistant and advisor on Russia, Fiona Hill, which Democrats convened as part of the impeachment inquiry against the President.

Gaetz doesn't sit on the House Foreign Affairs, Intelligence, or Oversight Committees, which are overseeing the inquiry, but implied that his seat on the House Judiciary Committee entitled him to be present for the testimony. The House Parliamentarian disagreed, confirming that Gaetz was not allowed to attend.

Shortly after being ejected from the hearing, Gaetz fumed to reporters, accusing House Democrats like Intelligence Chair Adam Schiff (D-CA) of conducting a "kangaroo court."

Gaetz later vilified House Democrats on Twitter as well, falsely describing the Constitutionally-enshrined process of impeachment as a "coup."

The perpetrators of this impeachment hoax must be held accountable — both by the Congress, and by the American people.
— Rep. Matt Gaetz (@Rep. Matt Gaetz) 1571067219.0

Gaetz frequently acts as a bulldog in defense of Trump. He found himself in hot water ahead of former Trump attorney-turned-enemy Michael Cohen's testimony before Gaetz's committee. Gaetz was criticized for trying to intimidate Cohen with a tweet threatening to reveal Cohen's alleged affairs.

Many thought Gaetz's attempt to observe the proceedings this morning was just another instance of him attempting to intimidate a witness on behalf of the President.

Looks like Goonda Gaetz is back, trying to intimidate witnesses like he did when Michael Cohen testified https://t.co/hVX1a2kDQu
— Asha Rangappa (@Asha Rangappa) 1571068154.0

Others simply laughed at Gaetz getting shown the door.

It's worth noting that former Congressman Trey Gowdy (R-SC) ejected fellow Republican Darrell Issa (R-CA) for trying to infiltrate a closed-door hearing related to Benghazi in 2015.

Fiona Hill was expected to testify that she and other officials strongly objected to Donald Trump's removal of former Ukraine Ambassador Marie L. Yovanovitch, who testified to the committees last week.