Republicans Barged Into Classified Hearing With Their Cell Phones, Now They're Trying to Claim They Didn't 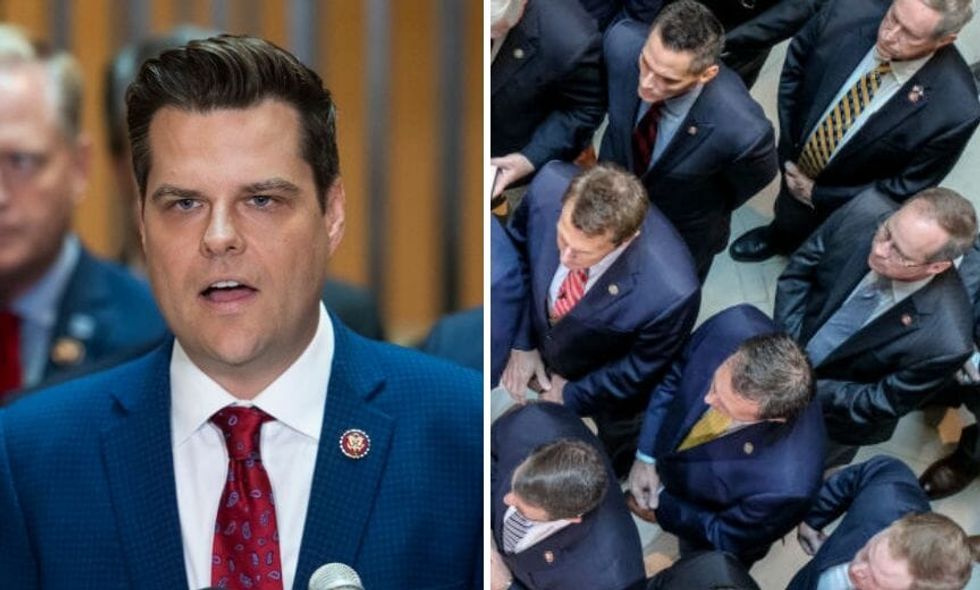 You may recall that Congressman Matt Gaetz (R-FL) recently tried to infiltrate the closed-door testimony of White House Deputy Assistant Fiona Hill as she answered questions regarding President Donald Trump as part of the impeachment inquiry against him.

Gaetz is not on the House Foreign Affairs, Intelligence, or Oversight Committees, which are overseeing the inquiry, but he nevertheless believed he was entitled to be there. The House Parliamentarian disagreed, and Gaetz was ejected.

Now Gaetz is up to his old tricks. On Wednesday morning, Gaetz returned—and he brought two dozen other House Republicans with him.

Despite numerous Republicans on the relevant committees overseeing the hearings along with their Democratic counterparts, Gaetz accused Democrats of obstruction for holding the hearing behind closed doors. He and other House Republicans proceeded to storm the Sensitive Compartmented Information Facility (SCIF), which is reserved for classified hearings, brandishing their personal devices in an unequivocal violation of the rules protecting national security.

Trump had advance knowledge of and supported the demonstration, which now has police scouring the facility for potential national security breaches.

Republicans like Gaetz and others proceeded to stage a sit-in, delaying the scheduled testimony of top Defense Department official Laura Cooper.

Gaetz proceeded to tweet, apparently from inside the facility, which violates the ban on personal devices in a SCIF.

BREAKING: I led over 30 of my colleagues into the SCIF where Adam Schiff is holding secret impeachment depositions.… https://t.co/tq6LalUrA2
— Rep. Matt Gaetz (@Rep. Matt Gaetz) 1571844740.0

Upon realizing his mistake, he walked it back with this eye-roller of a tweet, claiming that it was actually a "Tweet from Staff" outside the room, even though his tweet was quite clear that he was "still inside":

And he wasn't the only one.

Given that lawmakers were clearly seen bringing their personal devices into the facility, people were skeptical.

@RepMarkWalker Wait how do the staff outside the room, totally plausibly tweeting from your phone which you totally… https://t.co/c2iVA0plON
— Jessica Shortall 🧂 (@Jessica Shortall 🧂) 1571847514.0

Journalists and former National Security officials pointed out just how blatant the violation was.

There was definitely a double standard at play.

If an employee of the intelligence community brought their personal device into a secure facility and live-tweeted… https://t.co/g7QyYRtlqq
— Josh Campbell (@Josh Campbell) 1571847966.0

House Republicans chose to do this at a time that House Speaker Nancy Pelosi (D-CA) was at her brother's funeral, giving her no chance to immediately comment or intervene.

The scheduled hearing has finally commenced, after five hours of delay thanks to House Republicans.