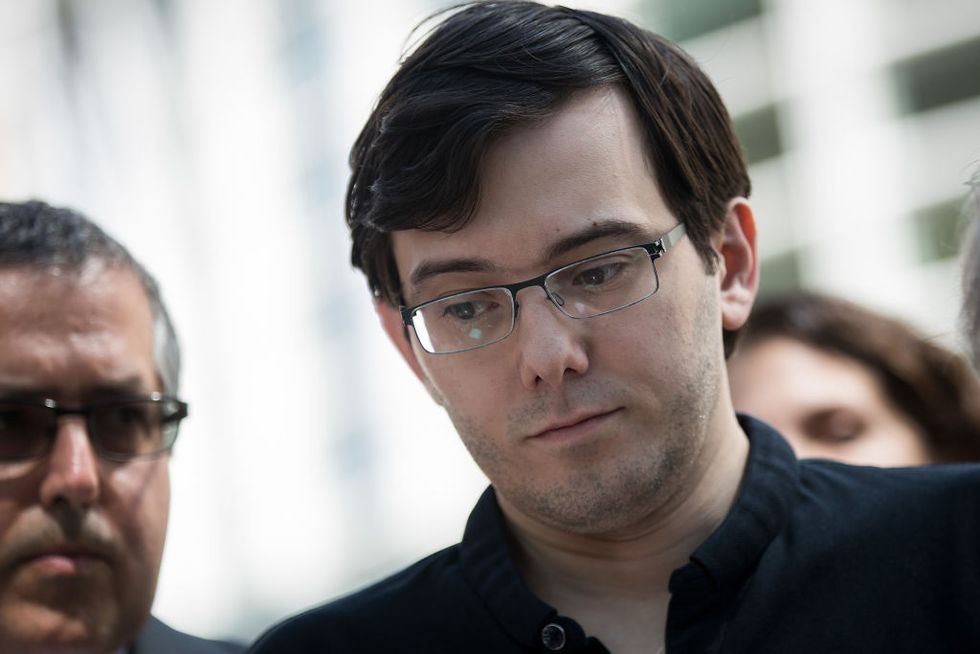 NEW YORK, NY - AUGUST 4: Former pharmaceutical executive Martin Shkreli pauses while speaking to the press after the jury issued a verdict in his case at the U.S. District Court for the Eastern District of New York, August 4, 2017 in the Brooklyn borough of New York City. Shkreli was found guilty on three of the eight counts involving securities fraud and conspiracy to commit securities and wire fraud. (Photo by Drew Angerer/Getty Images)

Martin Shkreli, the notorious "Pharma Bro" vilified for jacking up the price of a drug in a high profile price gouging scandal, was sentenced to seven years in prison today for defrauding investors in two failed hedge funds.

Shkreli broke down in tears as he made a final plea and cried to U.S. District Judge Kiyo Matsumoto, admitting he'd made many mistakes.

“I want the people who came here today to support me to understand one thing, the only person to blame for me being here today is me,” he said. “I took down Martin Shkreli.”

He also apologized to the investors he defrauded, saying: “I am terribly sorry I lost your trust. You deserve far better."

Reporters in the courtroom broadcast the news of Shkreli's tearful plea to the world.

#Shkreli: "The psychology report was a stunning revelation to me. I am receptive to help bc I dont want to let anyone down ever again."
— Meg Tirrell (@Meg Tirrell) 1520616908.0

In the greatest insult to his storied life as an Internet troll, Martin Shkreli's sentencing isn't even trending on Twitter.
— Max Burns (@Max Burns) 1520620418.0

But Judge Matsumoto remained firm, insisting that the punishment had nothing to do with his online behavior––Shkreli achieved notoriety after trolling many of his critics online––let alone raising the cost of Daraprim, an antiparasitic drug used to treat AIDS patients.

“This case is not about Mr. Shkreli’s self-cultivated public persona ... nor his controversial statements about politics or culture,” the judge said.

Earlier this week, Judge Matsumoto ruled that Shkreli would have to forfeit more than $7.3 million in a brokerage account and personal assets, including a one-of-a-kind Wu Tang Clan album he'd purchased for more than $2 million. The judge clarified that authorities would not seize Shkreli's property until he had the opportunity to appeal.

The punishment was a little less than half of what prosecutors had initially recommended: Shkreli faced a maximum of 45 years in prison for his crimes. Shkreli was also fined $75,000 and received credits for the six months he's spent in federal prison thus far.

I remember when I first disclosed Martin Shkreli was under criminal investigation & had pled the 5th and sought to… https://t.co/179rzuy28R
— Kurt Eichenwald (@Kurt Eichenwald) 1520618781.0

Prosecutors argued that Shkreli was a "master manipulator" who deserved 15 years in prison. His attorneys, meanwhile, portrayed him as a "misunderstood eccentric" who had simply tried––and failed––to make those investors wealthier.  In fact, attorney Benjamin Brafman told Judge Matsumoto Friday that he sometimes wants to hug Shkreli––and other times, he simply wants to punch him in the face. Nonetheless, he argued for a mere 18-month prison sentence.

Celebrate Martin Shkreli's sentencing by singing his name in a mocking tone like the mice from Cinderella.
— Alexandra Erin (@Alexandra Erin) 1520621877.0

Assistant U.S. Attorney Jacquelyn Kasulis was adamant that Shkreli deserved the harsher sentence, and scoffed at any suggestion that he is anything other than a criminal convicted of serious fraud. She said he deserves it not because "he is “the most hated man in America,” but because he has no respect for the law or the court proceedings.

“I also want to make clear that Mr. Shkreli is not a child,” Kasulis said. “He’s not a teenager who just needs some mentoring. He is a man who needs to take responsibility for his actions.” (Shkreli is, in fact, 34.)

"We’re delighted in many ways,” Shkreli said at the time, adding that he was glad to have evaded most of the more serious charges. “This was a witch hunt of epic proportions. They may have found some broomsticks.”

Shkreli, prosecutors said, told “lies upon lies,” including claiming he had $40 million in one of his funds at a time when, in fact, he had little more than $300 in the bank. He further duped multiple investors into putting millions of dollars into two hedge funds he ran, MSMB Capital and MSMB Healthcare. He further claimed to have an excellent record running the two hedge funds, and falsely stated his investment strategy had a low level of risk.

At the time, prosecutor Jacquelyn Kasulis said the trial “has exposed Martin Shkreli for who he really is — a con man who stole millions.”

Such was the disdain for Shkreli that the judge struggled to find potential jurors who didn’t already dislike him. Judge Matsumoto slammed Shkreli during the second week of testimony for talking to reporters in the courthouse where jurors could potentially hear him.

The following month, Judge Matsumoto revoked Shkreli's $5 million bail while he awaited sentencing on the securities fraud charges because he had offered $5,000 for a strand of Hillary Clinton’s hair with a follicle while she was on a book tour for her memoir, What Happened.

"On HRC’s book tour, try to grab a hair from her,” Shkreli wrote, referring to Clinton. “Will pay $5,000 per hair obtained from Hillary Clinton,” he continued, noting that he wanted to compare Clinton’s DNA to a sample he already had.

Shkreli edited the post to say that he had meant it to be satirical, and he later deleted it. Prosecutors argued, however, that there was a risk Shkreli’s social media followers would take his request seriously and act on it. The Secret Service took the threat seriously enough to request an interview with Shkreli and increased the security presence around Clinton. At the hearing in Federal District Court in Brooklyn, Judge Matsumoto called Shkreli a “danger to society” before canceling his bond release.

“The fact that he continues to remain unaware of the inappropriateness of his actions or words demonstrates to me that he may be creating ongoing risk to the community,” she said before revoking Shkreli’s bond. “That is a solicitation to assault in exchange for money that is not protected by the First Amendment.”

Judge Matsumoto also noted that while Shkreli had edited the original post to say it was satirical, he later wrote another post much like the first: “$5,000 but the hair has to include a follicle. Do not assault anyone for any reason ever (LOLIBERALS).”

Shkreli’s lawyer, Benjamin Brafman, insisted his client is not violent, and that he simply had “a momentary lapse in judgment.” Shkreli had not “intended to cause harm,” he continued. “Being inappropriate does not make you a danger to the community. He says things that are stupid. I don’t think stupid makes you violent.”

Shkreli’s legal team claimed his online comments were not dissimilar to those made by comedian Kathy Griffin, who sparked national controversy after she posed for a photograph while holding a faux bloody head of President Donald Trump. They also compared Shkreli to the president, saying that Shkreli used “political hyperbole” much in the way Trump did during the 2016 presidential campaign when he told his followers that Hillary Clinton would decimate the Second Amendment if elected.

Shkreli’s trial on fraud charges was unrelated to the price gouging scandal surrounding the antiparasitic drug Daraprim. Shkreli gained public notoriety after acquiring the rights to the drug and gouging the price. The price of a dose of the drug in the U.S. market increased from US$13.50 to US$750 per pill, overnight, a factor of 56.

Shkreli became known as “Pharma Bro” for his unrepentant and combative nature on social media. He appeared to relish the backlash, lamenting that he didn’t raise the price of the drug more. Twitter eventually suspended his account after he repeatedly harassed journalists, including a Teen Vogue editor.