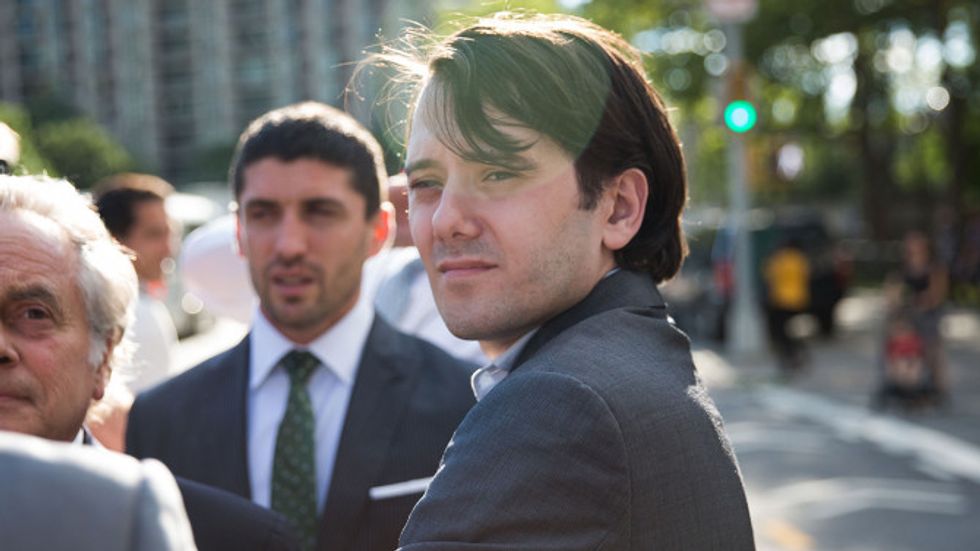 A federal judge yesterday revoked the $5 million bail of Martin Shkreli, the former pharmaceutical CEO who found public notoriety as the “Pharma Bro” after a price gouging scandal, because he had offered $5,000 for a strand of Hillary Clinton’s hair with a follicle while she's on a book tour. Shkreli had been awaiting sentencing after he was found guilty in August of conspiracy to commit securities fraud and two counts of securities fraud for misleading investors.

“On HRC’s book tour, try to grab a hair from her,” he wrote, referring to Clinton. “Will pay $5,000 per hair obtained from Hillary Clinton," he continued, noting that he wanted to compare Clinton's DNA to a sample he already had.

Shkreli edited the post to say that he had meant it to be satirical, and he later deleted it. Prosecutors argued, however, that there was a risk Shkreli's social media followers would take his request seriously and act on it. The Secret Service took the threat seriously enough to request an interview with Shkreli and increased the security presence around Clinton. At the hearing in Federal District Court in Brooklyn, Judge Kiyo A. Matsumoto called Shkreli a "danger to society" before canceling his bond release.

"The fact that he continues to remain unaware of the inappropriateness of his actions or words demonstrates to me that he may be creating ongoing risk to the community," she said before revoking Shkreli's bond. “That is a solicitation to assault in exchange for money that is not protected by the First Amendment.” Judge Matsumoto also noted that while Shkreli had edited the original post to say it was satirical, he later wrote another post much like the first: “$5,000 but the hair has to include a follicle. Do not assault anyone for any reason ever (LOLIBERALS).”

Shkreli’s lawyer, Benjamin Brafman, insisted his client is not violent, and that he simply had “a momentary lapse in judgment.” Shkreli had not "intended to cause harm,” he continued. “Being inappropriate does not make you a danger to the community. He says things that are stupid. I don’t think stupid makes you violent."

Shkreli's legal team claimed his online comments were not dissimilar to those made by comedian Kathy Griffin, who sparked national controversy after she posed for a photograph while holding a faux bloody head of President Donald Trump. They also compared Shkreli to the president, saying that Shkreli used "political hyperbole" much in the way Trump did during last year's presidential campaign when he told his followers that Hillary Clinton would decimate the Second Amendment if elected.

Shkreli appeared animated during the hearing, his smile only fading after Judge Matsumoto decided to jail him. He remained expressionless as deputy U.S. marshals took him into custody.

Shkreli's trial on fraud charges was unrelated to the price gouging scandal surrounding the antiparasitic drug Daraprim. Shkreli gained public notoriety after acquiring the rights to the drug––which is used to treat AIDS patients––and jacking up its price. The price of a dose of the drug in the U.S. market increased from US$13.50 to US$750 per pill, overnight, a factor of 56. Shkreli became known as “Pharma Bro” for his unrepentant and combative nature on social media. He appeared to relish the backlash, lamenting that he didn’t raise the price of the drug more. Twitter eventually suspended his account after he repeatedly harassed journalists, including a Teen Vogue editor.