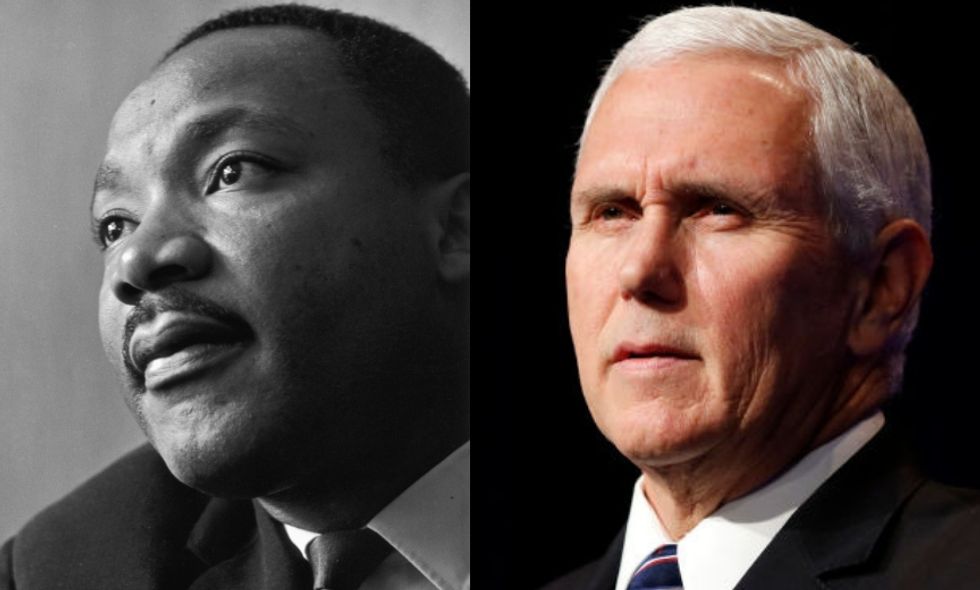 As the nation reflects on the legacy of Dr. Martin Luther King Jr., Vice President Mike Pence is receiving backlash for comparing President Donald Trump's insistence on funding a wall at the southern border to Dr. King's calls for humanity and justice for people everywhere.

"One of my favorite quotes from Dr King was, 'Now is the time to make real the promises of democracy.' You think of how he changed America, he inspired us to change through the legislative process, to become a more perfect union. That's exactly what POTUS is calling on the Congress to do. Come to the table... we'll secure our border."

Many Americans agreed with MLK III.

@washingtonpost But what doesn’t work here is the definition of a more perfect union. MLK’s definition was the anti… https://t.co/qwcdNyFxri
— Mel (@Mel) 1548026169.0

@washingtonpost Probably the first time he has thought about MLK ever.
— Clifton Rodney (@Clifton Rodney) 1548026832.0

The actions of the Trump administration—like the constant vilification of NFL players kneeling during the national anthem—seem to many the antithesis of the work to which Dr. King dedicated his life.

Upon a visit to the Berlin Wall, Dr. King said the wall was depressing and represented "the divisions of mankind."

The Trump administration has shut down the government over funding for a similar wall at the southern border.

People are noticing the hypocrisy.

@RWPUSA @HuffPostPol I’m sure about the last thing in the world MLK would approve of is envoking his name to ration… https://t.co/9WntnK0Cou
— Trevor Harding (@Trevor Harding) 1548083150.0

@RWPUSA @HuffPostPol Bizarro-MLK: 'I have a dream that some day huddled masses yearning to breathe free, who strugg… https://t.co/AUcEYXly6Q
— Michael Marsh (@Michael Marsh) 1548082920.0