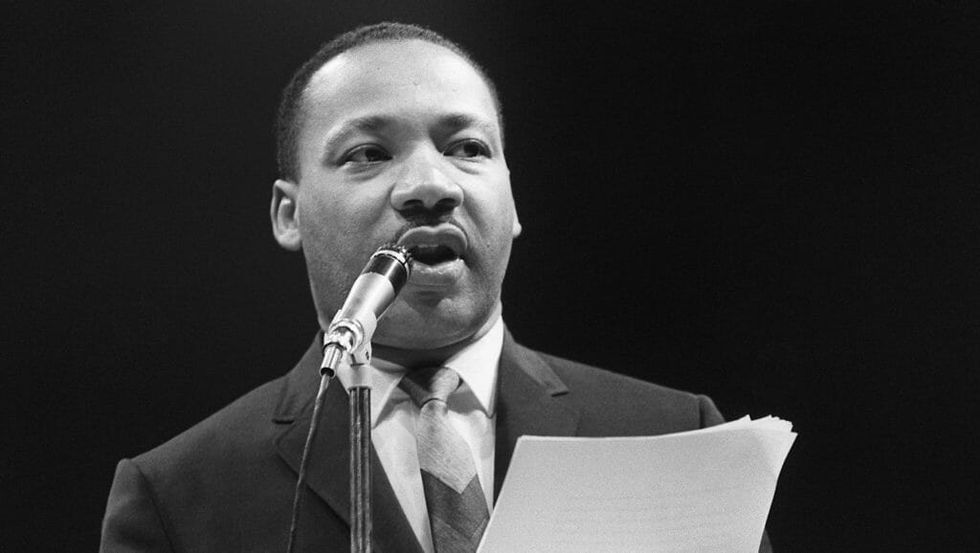 The US clergyman and civil rights leader Martin Luther King addresses, 29 March 1966 in Paris' Sport Palace the militants of the "Movement for the Peace". "Martin Luther King was assassinated on 04 April 1968 in Memphis, Tennessee. James Earl Ray confessed to shooting King and was sentenced to 99 years in prison. King's killing sent shock waves through American society at the time, and is still regarded as a landmark event in recent US history.

Martin Luther King III, the eldest son of slain civil rights icon Dr. Martin Luther King Jr., issued an emotional rebuke of President Donald Trump during a sermon on Monday. Preaching to crowded pews on what would have been his father's 89th birthday, King said of Trump, "the president insisted that our nation needs more citizens from white states like Norway, I don’t even think we need to spend any time even talking about what it says and what it is.”

King added that "the problem is that you have a president who says things and has the power to execute and create racism. That's a dangerous power and a dangerous position. We cannot tolerate that."

"We got to find a way to work on this man’s heart. George Wallace was a staunch racist and we worked on his heart and ultimately George Wallace transformed.”

Wallace, coincidentally the 45th governor of Alabama, was a staunch racist and segregationist. Most notably, Wallace fought to prevent the integration of Alabama's public schools. Wallace eventually renounced racism toward the end of his life.

President Trump purportedly referred to Haiti and African nations as "shithole countries" during a meeting with lawmakers last Thursday. In the meeting, Trump also said he would prefer immigrants who came from Norway, having met with the country's prime minister earlier that day. President Trump has denied he made racist remarks. “I’m not a racist. I am the least racist person that you have ever interviewed, that I can tell you," the president said.

Continue to page 2 to keep reading...

Dr. King's daughter, Reverend Bernice King, similarly slammed the president during her own memorial service. "Our collective voice, in this hour, must always be louder than the voice of one who may speak sometimes, representing these United States." Reverend King emphasized that the president's "words do not reflect the legacy of my father, who was a patriot and also a citizen of the world. In light of the current state of affairs, we must understand that our collective voice is more important now than ever before." Reverend King added that "we cannot allow the nations of the world the embrace the words that come from our president as a reflection of the true spirit of America."

Further tweets from Reverend King serve as a reminder of her father's vision:

Dr. King was assassinated in Memphis Tennessee on April 4, 1968.