Republican House Reps Are Going After Michael Cohen for Perjury After His Public Testimony, Because of Course They Are 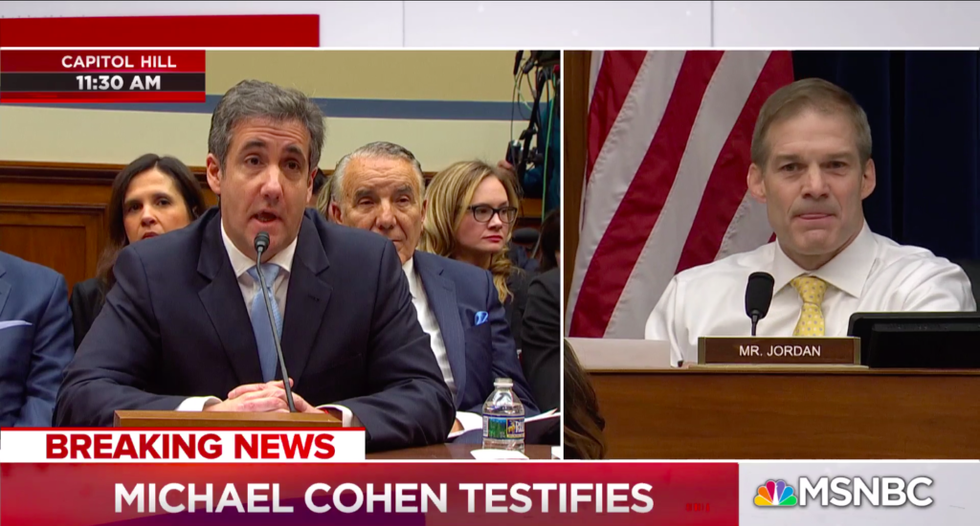 “We write to refer significant evidence that Michael D. Cohen committed perjury and knowingly made false statements during his testimony before an Oversight and Reform Committee hearing. While testifying under oath, Mr. Cohen made what appear to be numerous willfully and intentionally false statements of material fact contradicted by the record established by the Justice Department in United States v. Cohen.

Mr. Cohen’s testimony before the Committee at times was in direct contradiction to assertions contained in pleadings authored by the United States Attorney’s Office for the Southern District of New York (SDNY.) There are other instances in which Mr. Cohen’s statements to the Committee were immediately contradicted by witnesses with firsthand knowledge of the subject matter.”

Jordan and Meadows claim Cohen gave false statements regarding his desire to work in the White House and to take a role within the Trump administration, among other things:

Getting sick watching these hearings. I know Michael Cohen personally for many years and he told me several times… https://t.co/CSulnbpOIl
— Bo Dietl (@Bo Dietl) 1551283988.0

Cohen's attorney Lanny Davis, responded to the lawmakers' claims in a statement, calling the criminal referral a "baseless" one:

Mr. Cohen testified truthfully before the House Oversight Committee. He took full responsibility for his guilty pleas. He also backed up much of his testimony with documents. It may not be surprising that two pro-Trump Committee members known [sic] have a baseless criminal referral. In my opinion, it is a sad misuse of the criminal justice system with the aura of pure partisanship.

Jordan and Meadows have also been criticized for executing what many believe is simply a partisan exercise.

You know the GOP is morally bankrupt when #JimJordan makes #MichaelCohen look like a model of ethics and integrity.
— Peter Daou (@Peter Daou) 1551305470.0

But the letter the two legislators submitted to Attorney General Barr indicates they're eager to move forward despite the heavy criticisms.

They said Cohen's testimony "was a spectacular and brazen attempt to knowing and willfully testify falsely and fictitiously to numerous material facts" that contained "intentionally false statements designed to make himself look better on a national stage."

"Mr. Cohen's prior conviction for lying to Congress merits a heightened suspicion that he has yet again testified falsely before Congress," they wrote.

Jordan and Cohen butted heads for a brief moment yesterday during the hearing that captivated the nation. Jordan, when not accusing Cohen of remorselessness, suggested, as he does in his letter to the attorney general, that Cohen was trying to save face.

"You didn't get brought to the dance," Jordan told Cohen about his lack of an offer to work in White House. Cohen disagreed vehemently.

"Sir, I was extremely proud to be personal attorney to the President of the United States of America," he replied. "I did not want to go to the White House."