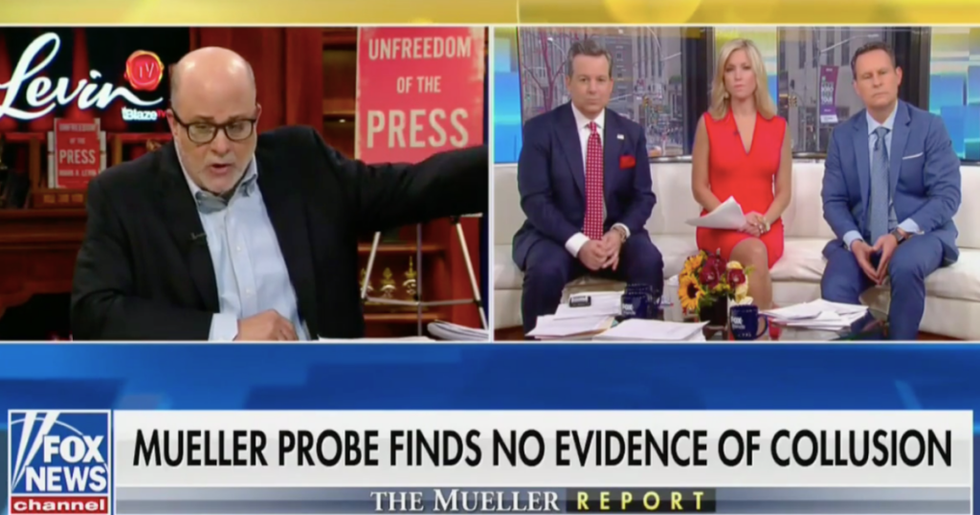 “There's not a syllable of law in it,” Levin said. “None of it’s been tested in a court of law. There's been no challenge to it. No cross-examination. Nothing!"

Attempts by host Ed Henry, filling in for Steve Doocy, to interject were fruitless, particularly when Henry asked Levin if it concerned him that Trump may not have been truthful.

“It matters completely to me! So how do you know this is truthful, Ed?” Levin replied.

Levin shared footage from his appearance on the program to his social media feed. Although he had many supporters, others said his commentary amounted to little more than an angry outburst and accused him of helping to obfuscate other elements of the report.

Levin later described the media as "the unfree press" and accused members of the media of attempting to discredit Attorney General William Barr "because they destroy anybody who stands up to the mob.”

In Volume II of the Mueller report, the special counsel and his investigators examined 10 episodes of the president's possible obstruction and made it clear that the investigation did not exonerate the president of wrongdoing:

Mueller also concluded that Trump's public comments could be considered obstruction because he weaponized his authority in attempts to discredit and shut down the probe:

“While it may be more difficult to establish that public-facing acts were motivated by a corrupt intent, the President’s power to influence actions, persons, and the events is enhanced by his unique ability to attract attention through use of mass communications. And no principle of law excludes public acts from the scope of obstruction statutes. If the likely effect of the acts is to intimidate witnesses or alter their testimony, the justice system’s integrity is equally threatened.”

The report cites “the series of events we investigated" that "involved discrete acts"––referring to attempts President Trump made to kill the investigation, such as when he terminated former FBI Director James Comey––ultimately concluding that “it is important to view the President’s pattern of conduct as a whole. That pattern sheds light on the nature of the President’s acts and the inferences that can be drawn about his intent.”

Trump's “efforts to influence the investigation were mostly unsuccessful, but that is largely because the persons who surrounded the President declined to carry out orders or accede to his requests,” the report says, but that doesn't shield him from formal charges.

“The conclusion that Congress may apply the obstruction laws to the president’s corrupt exercise of the powers of the office accords with our constitutional system of checks and balances and the principle that no person is above the law."

House Judiciary Committee Chairman Jerry Nadler (D-NY) has requested a complete and unredacted copy of the Mueller report by May 1.

My Committee needs and is entitled to the full version of the report and the underlying evidence consistent with past practice. The redactions appear to be significant," wrote Nadler in a statement. "We have so far seen none of the actual evidence that the Special Counsel developed to make this case."