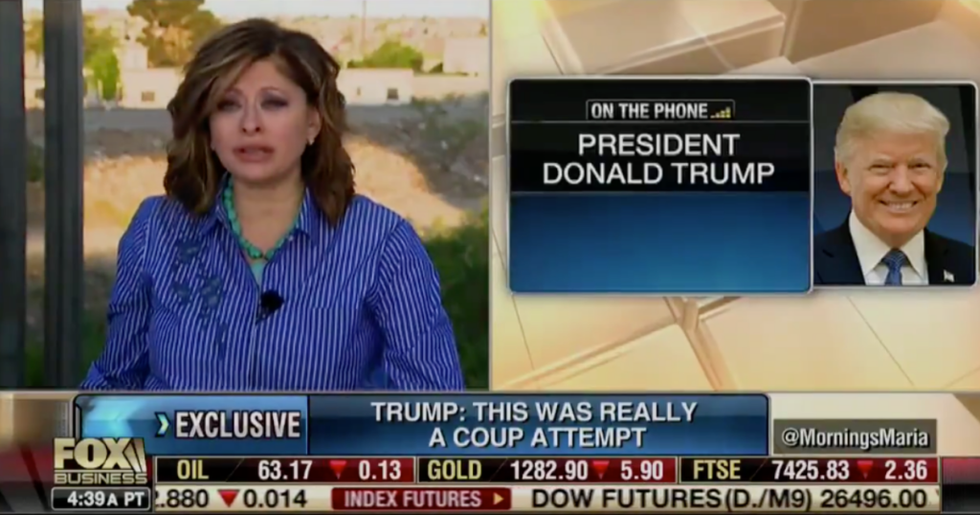 Trump rambled about "the lovers" (presumably former FBI agents Peter Strzok and Lisa Page), Hillary Clinton, and the "deep state" when Bartiromo made her first attempt to cut him off.

"Mr. President, thank you so much," Bartiromo said. Trump paid it no heed.

"When Hillary Clinton loses, we want an insurance policy where we can get Trump out," Trump continued without offering proof. "It didn't work so well but I'll tell you what it really hurt our country and it really hurts our country. This is cleaning out the deep state. This is cleaning the swamp. And we've gotten rid of 22 people at the very top. These people are corrupt."

Bartiromo tried to hurry Trump along a second time. "Yeah, yeah," she said.

Trump continued, alleging without evidence that Brennan and Clapper are corrupt: "And then they get paid by CNN, they make more money than they've ever seen before, although possibly they made a lot more than that, we just don't know about it, I mean something had to go on. But it's a disgrace."

Without breaking, Trump pivoted back to the origins of the Russia Investigation. "What about the dossier? How much did Hillary Clinton pay for the dossier, you know she paid for it, and the DNC paid for it. This guy Steele is a total fraud."

Finally, Bartiromo was able to get Trump to hang up:

"Mr. President, thank you so much for calling in this morning, I so appreciate it, I know you have a busy day. Thank you sir."

The latest cringeworthy chapter of "old man yells at cloud."

This is our new normal, I guess.

@atrupar @MariaBartiromo This is not in the least funny. We outside the US cannot fathom why this travesty is allow… https://t.co/6iniR3SEDj
— Gabrielle (@Gabrielle) 1556549805.0

@atrupar @JoyAnnReid @MariaBartiromo This is scary & gross, and below the dignity of the Presidency. If there were… https://t.co/Ss5CZhsxm1
— Kirk Miller (@Kirk Miller) 1556559968.0

Does Trump actually have anything better to do, though? Really?

@atrupar @MariaBartiromo I imagine him sitting on the toilet doing this phone interview.
— Lolli (@Lolli) 1556549982.0

@atrupar @MariaBartiromo He's the kind of guy you set the phone down on and let him ramble. Trust me you won't be missed
— Christine (@Christine) 1556550032.0

Apparently not, as a similar instance occurred on Friday. Trump went off the rails during a call with Fox & Friends, his favorite executive time watch, prompting the hosts to hang up on him.

Trump's talking points were basically unchanged between Friday and Monday.

“Our Justice Department, which I try and stay away from, but at some point I won’t,” Trump yelled. They “should be looking at that kind of stuff [alleged anti-Trump bias in the FBI], not the nonsense of collusion with Russia.”

At this point, Trump's dictatorial tenor was making the hosts anxious, so Brian Kilmeade tried to push Trump off the phone.

“We’d talk to you all day, but it looks like you have a millions things to do,” Kilmeade said.

Not according to Trump.

“You could," Trump replied, but the Fox team was over it, and ended the call.

"You know, I think he was awake,” Steve Doocy joked.

Except no one is laughing.