March for Our Lives Just Recut Donald Trump's Oval Office Speech Into a Call to Action to End Gun Violence, and It's Powerful AF 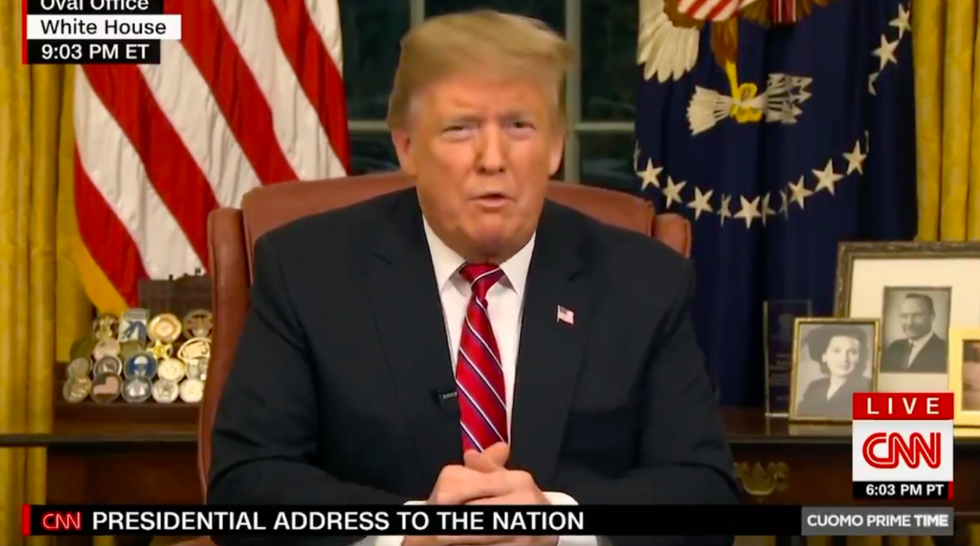 While many residents near the southern border insist that there's no crisis or immediate danger—with illegal immigration at an all-time low—it hasn't stopped President Donald Trump from shutting down the government for three weeks and counting until Democrats agree to fund a $5 billion border wall that the majority of the public doesn't want.

To bolster his case, Trump addressed the nation live from the Oval Office for the first time, in which he repeated the same talking points and offered no new information on when federal workers could expect to return to their jobs.

Though people think the "humanitarian crisis" is being inflated to build support for Trump's vanity project, the gun law reform group March for Our Lives has recut the Oval Office speech to address an all-too-real American crisis: Mass shootings.

As Trump laments about "a crisis of the heart, of the soul, of our broken system," the video shows children evacuating their schools and parents weeping outside.

Founded by young survivors of the Marjory Stoneman Douglas High School shooting in Parkland, Florida last year, March for our Lives took the nation by storm and immediately became one of the emblems of gun reform in the United States.

Many were moved by the video.

@AMarch4OurLives @Emma4Change If thoughts and prayers are good enough of a response from the GOP for gun violence i… https://t.co/nGSpEDAnkG
— Stefanie and Adam (@Stefanie and Adam) 1547177185.0

People knew what the real crisis was.

And it's not at the southern border, but nationwide.

@AMarch4OurLives @Emma4Change Wish he could be this concerned about the overwhelming gun violence this country is s… https://t.co/sVoV2sWu9r
— Bina (@Bina) 1547178567.0

The emergency resides in the White House as well.

Trump is expected to declare a national emergency at the border anyway.