British PM Claps Back At Trump After Insensitive Terror Tweets 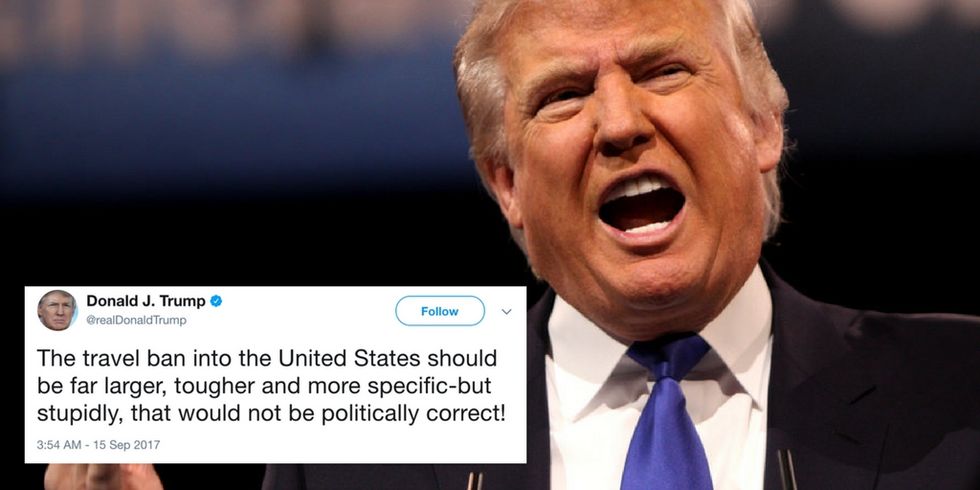 An “improvised explosive device” detonated on a London underground train Friday morning, injuring 23 people on their way to work. The explosion occurred at Parsons Green station and the authorities are treating it as an act of terrorism. While both British and world leaders responded with empathy, President Trump exploited the attack to forward his own travel ban agenda publicly on Twitter.

Prime Minister Theresa May, as she prepared to chair a meeting of Britain’s emergency response committee, had this to say via the official office of the Prime Minister's twitter account:

PM: My thoughts are with those injured at Parsons Green and emergency services who are responding bravely to this terrorist incident.
— UK Prime Minister (@UK Prime Minister) 1505467531.0

Trump on the other hand, began his multi-tweet tirade this morning by first criticizing British police.

Another attack in London by a loser terrorist.These are sick and demented people who were in the sights of Scotland Yard. Must be proactive!
— Donald J. Trump (@Donald J. Trump) 1505472175.0

And then used the attack as an opportunity to push for his travel ban.

The travel ban into the United States should be far larger, tougher and more specific-but stupidly, that would not be politically correct!
— Donald J. Trump (@Donald J. Trump) 1505472854.0

No mention of the many injured.

Prime Minister May later scolded Trump for his remarks:

"I never think it's helpful for anybody to speculate on what is an ongoing investigation."

London Mayor Sadiq Khan focused on the criminals in his statement: "The terrorist attack this morning was an attempt by evil and cowardly individuals to kill, to injure and disrupt our way of life." When asked about Trump’s tweets, Khan said he was too busy this morning working with authorities to check his feed: "I haven’t had a chance to look at Twitter, let alone tweet.”

"What I do know is there are many Americans in London who love London, there are many Americans – not just Americans but others around the world, who stand shoulder to shoulder with London and with Londoners to make sure that we stand together against these terrorists, these are evil and cowardly individuals who want to divide us and disrupt our way of live. As the major of London I can say this and I can speak for Londoners -- we are not going to allow them to do so," Khan added.

Thoughts with those injured in Parsons Green terrorist incident, and thanks to police, ambulance staff and firefighters who are responding.
— Jeremy Corbyn (@Jeremy Corbyn) 1505471846.0

And Trump continued to tweet about his travel ban, stating information that might be difficult for him to verify later.

We have made more progress in the last nine months against ISIS than the Obama Administration has made in 8 years.Must be proactive & nasty!
— Donald J. Trump (@Donald J. Trump) 1505473201.0

Back in June, Trump tweeted similar rhetoric after two other terrorist attacks also in London.