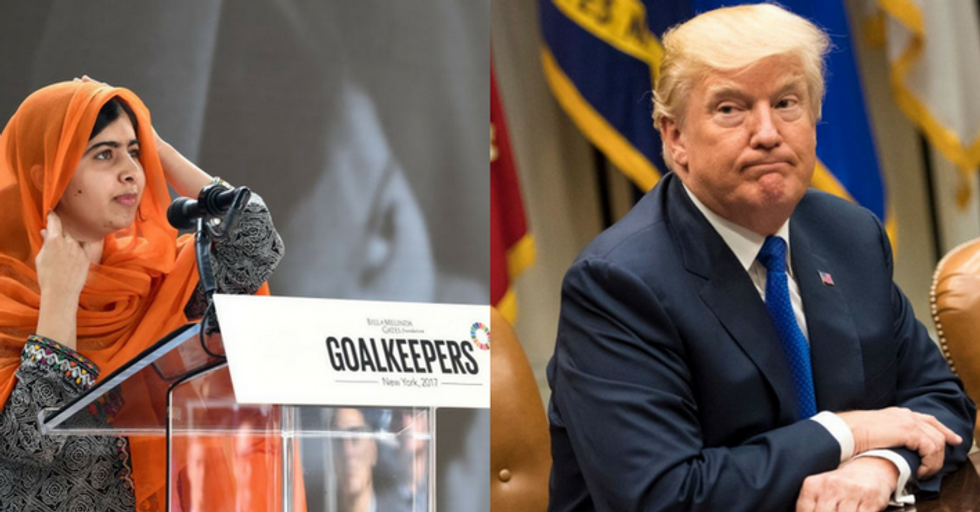 “We're not going to ask men to change the world. We're going to do it ourselves.”@Malala Yousafzai - the youngest ever @NobelPrize Laureate - gives her view on men in positions of power who harass women. pic.twitter.com/bE01QgUm5r

On Thursday, Malala Yousafzai, the youngest winner of the Nobel Peace Prize in 2012, sent a message to President Trump and other powerful men on the state of women's rights and gender equality.

The now 20-year-old women’s equality activist and current student at Oxford, spoke at the World Economic Forum in Davos, Switzerland. Trump arrived at the summit of world leaders on Wednesday.

Responding to a question about her message to “someone like Trump”, Yousafzai, said she feels “so disappointed to see that people in high positions talk about women in unequal terms and do not accept them as equals.”

In response to a question about Trump’s record on women’s rights and the allegations of harassment and abuse against him, Yousafzai replied:

(I)t is just shocking for a second to believe that this is actually happening. . . . I hope that women stand up and speak out against it.”

Yousafzai gained international attention after defying a Taliban ban on girls attending school in her native Pakistan, a decision her feminist father supported. Yousafzai suffered a gunshot to the head for it. She now uses her platform to advocate for equal education access for women and girls around the world.

I think it’s so important that our education gives the message of equality to every child.”

Malala Yousafzai long advocated that improving the lot of women required the support of men. Her message Thursday, that equality is achievable in spite of, not because of, men is a departure. She credits her father for encouraging her from an early age for her own success.

He challenged society and norms at every stage of his life. He was a feminist that was taking action. And if he hadn't, I wouldn't be here.”

“Many girls wanted to do what I am doing, but their brothers and their fathers wouldn't let them,” she said.