After Decisive Vote on Tuesday, Maine Governor Defies the Will of the People

The vote wasn't even close. 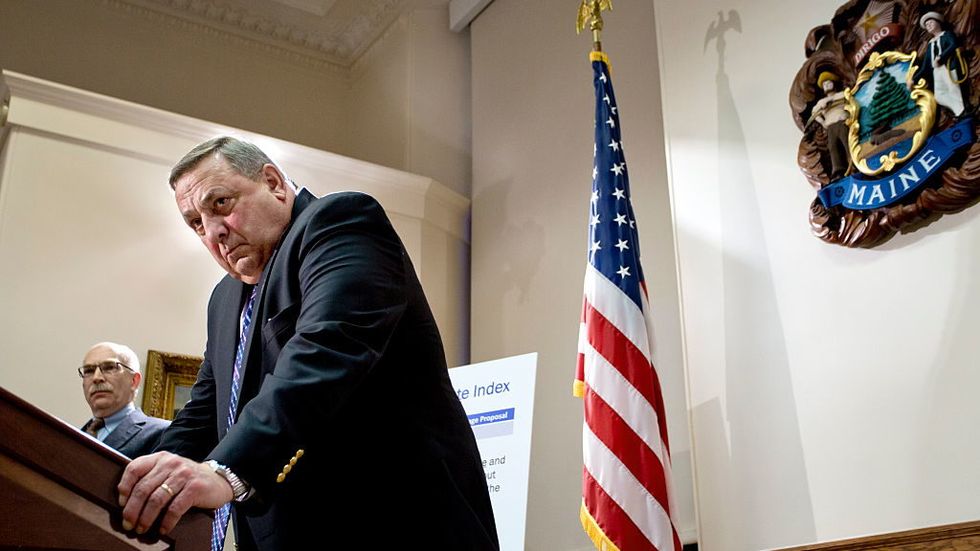 AUGUSTA, Maine - Gov. Paul LePage leans forward to answer a question from a reporter during a press conference in the Cabinet Room of the State House. (Photo by Gabe Souza/Portland Press Herald via Getty Images)

Republican Maine Governor Paul LePage said Wednesday his administration will not expand Medicaid, a day after voters approved a ballot measure to broaden the program.

On Tuesday, Maine voters approved Medicaid expansion under the Affordable Care Act, or as it's more commonly known, Obamacare. Maine becomes the first state to do so through a referendum. A total of 343,838 ballots were cast, a higher-than-expected turnout in a state with a population barely over 1 million. Medicaid expansion passed by 202,616 to 141,222 or 59% to 41%.

LePage, who is term-limited out of office next year, previously vetoed five Medicaid expansion bills passed by the state’s legislature. Frustrated by inaction, Maineiacs gathered the required signatures to put the referendum on Tuesday's ballot.

Leading up to the vote, LePage made numerous statements accusing the referendum's supporters of lying to voters, but offered no proof. LePage claimed expansion would cost Maine $100 million. After his defeat at the polls, LePage made the same claims.

But LePage's figure is twice what the Maine Legislature’s Office of Fiscal Program and Review, which ranks the cost of bills for the Legislature, estimated. According to their figures, Maine would require $54.4 million and be matched with federal funds of $525 million to provided needed affordable healthcare to about 80,000 people. Nearly 8% of Maine's working poor are still without medical coverage.

After that, the Governor has 90 days to submit the required paperwork to the federal government to implement the expansion.

But this year the Maine Legislature repealed or significantly altered four citizen-initiated measures: ranked choice voting, additional taxes on the richest citizens for public school funding, marijuana legalization and the minimum wage. Those moves angered Maineiacs who approved the measures and some lawmakers. They charged the will of the people and their rights under the Maine constitution are being violated.

Democratic House Speaker Sara Gideon and Senate Minority Leader Troy Jackson both released statements Wednesday criticizing the governor for threatening to block the will of Maine voters again. Meanwhile, as expected, House Republican leader Ken Fredette once again aligned with the governor against the people of Maine.

And when, inevitably, Gov. LePage and Rep. Fredette conspire this year to overturn the voters’ will and take health care away from 80,000 Mainers, we will rise up to resist them. And we will win.”