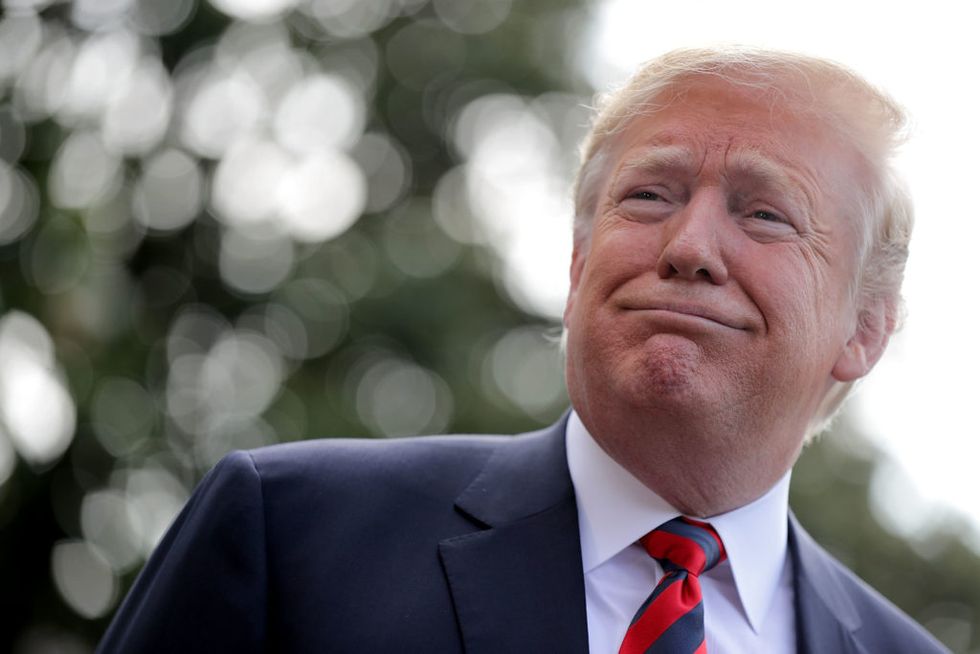 This morning's tweet storm from President Donald Trump showed him attacking Florida's first black nominee for governor, accusing former President Barack Obama of spying on his campaign, and insisting that Hillary Clinton colluded with the Russians.

Sometime during all that, he also managed to tweet a claim he has made before about news organizations using anonymous sources -- that they're not to be trusted because "they are fiction."

Of course, this comes hours after Trump tweeted accusations that China hacked the emails of Hillary Clinton, in reference to an article that cited two anonymous sources.

Many already know that anonymous sources are vital to the function of a free press. Some of the most pivotal "scoops" in American history--including the Watergate scandal--relied on well-vetted, inside sources who spoke on the condition of anonymity.

But New York Times reporter Maggie Haberman didn't focus on this widely-known fact. Instead, she cited Trump's own history as his own anonymous source.

And, to be clear, often trying to make claims on background about himself with tenuous factual basis https://t.co/WBNBUEtUEH
— Maggie Haberman (@Maggie Haberman) 1535547939.0

The NYC opinion-maker view of Trump was based on decades of self-promotion and deals that didn’t always hold. It wa… https://t.co/DRspVXYK3i
— Maggie Haberman (@Maggie Haberman) 1535549502.0

Philip Rucker of the Washington Post also made a similar point.

Trump for decades has been an anonymous source to journalists — from floating news about his sex life to NY tabloid… https://t.co/egZorlHMYv
— Philip Rucker (@Philip Rucker) 1535546670.0

Trump is partly convinced of this because he has spent so much of his life lying to the press as an "anonymous" sou… https://t.co/dDkyTGJS6C
— David Atkins (@David Atkins) 1535547048.0

Trump's rails against unnamed sources have seen a resurgence after a recent CNN story, which reported that former Trump attorney Michael Cohen was prepared to testify that Trump knew ahead of time about the infamous Trump Tower meeting with liaisons to Russia. The article cited multiple unnamed sources, one of whom proved to be Cohen's attorney Lanny Davis, who later claimed that he "should have been more clear." CNN has stood by the story, but the misstep has still bolstered Trump's claims to his supporters.

However, as Haberman pointed out, Trump has often anonymously contributed to stories about himself with false information, frequently using pseudonyms to do so.

Mr. Trump employed pseudonyms like John Barron, John Miller, and most recently David Dennison. The first two, he used for speaking with the press.

Many were quick to call him out for it.

@maggieNYT @davidshepardson This is a good untold story. How many anonymously sourced stories about Trump, even now… https://t.co/I3YQvuKunT
— Jim Zarroli (@Jim Zarroli) 1535547969.0

Though Trump may be decrying unnamed sources now, but in addition to acting as a source himself, he's often cited information by them as well.

An 'extremely credible source' has called my office and told me that @BarackObama's birth certificate is a fraud.
— Donald J. Trump (@Donald J. Trump) 1344284580.0

Sources inside @AGSchneiderman’s office are saying that they are very concerned with the allegations against their lightweight boss.
— Donald J. Trump (@Donald J. Trump) 1386960096.0

Trump's claims about anonymous sources and frequent cries of "fake news" may validate the notions of his supporters and the notions Trump has of himself, however Americans like Maggie Haberman and others who responsibly consume media aren't buying it.