Emmanuel Macron Took a Direct Swipe at Donald Trump In His Armistice Day Speech With Trump Sitting Just a Few Feet Away, and People Are Loving Him For It

Guess the bromance is over. 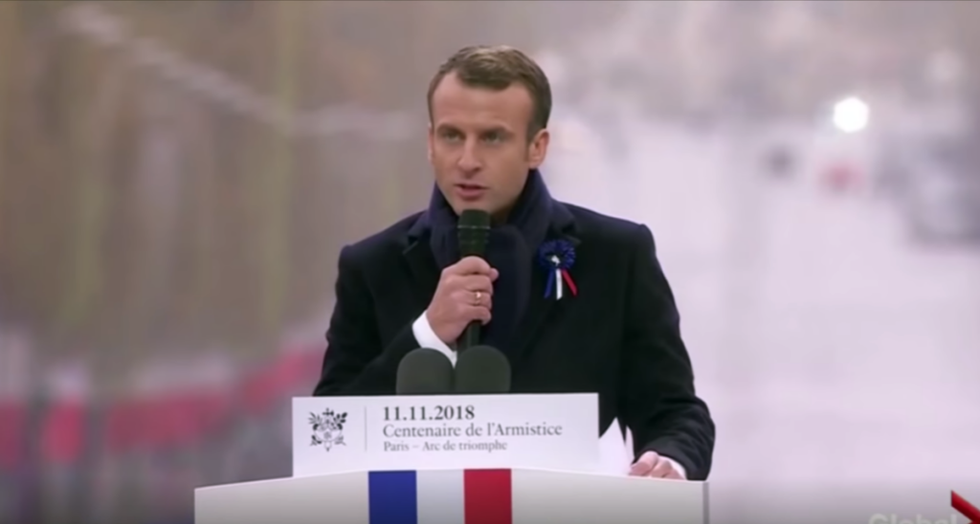 World leaders gathered in France over the weekend to commemorate the 100th anniversary of the armistice signed between the Allied Forces of WWI and Germany on November 11, 1918. Celebrated as Armistice Day, in the United States, the day became known as Veterans' Day to recognize all veterans of all conflicts.

President Donald Trump attended some of the events at the gathering, although he drew heavy criticism for skipping a visit to Aisne-Marne American Cemetery and walking the Champs-Élysées with other world leaders. The White House initially cited weather and logistics, but later changed the story to shift blame onto the Secret Service for grounding the President's helicopter.

Other world leaders and a US delegation led by retired general and Chief of Staff John Kelly drove the 90 minutes to Aisne-Marne American Cemetery to pay their respects to US soldiers and Marines buried in France.

One event Trump did attend, along with Russian President Vladimir Putin, was a gathering at the Arc de Triomphe in Paris. French President Emmanuel Macron addressed the gathered leaders.

In what many see as a direct rebuke of the recent rhetoric of President Trump, Macron denounced nationalism, warning against "old demons coming back to wreak chaos and death." He advised world leaders to reject the "selfishness of nations only looking after their own interests."

The French President then stated:

"Because patriotism is exactly the opposite of nationalism."

"By putting our own interests first, with no regard to others, we erase the very thing that a nation holds dearest, and the thing that keeps it alive: its moral values."

Macron repeated his statement on Twitter, in French and in English.

Patriotism is the exact opposite of nationalism. Nationalism is a betrayal of patriotism. By putting our own intere… https://t.co/V2TMh1YoFS
— Emmanuel Macron (@Emmanuel Macron) 1541953875.0

President Trump has yet to directly respond to Macron's remarks. But plenty of other people did.

People thanked Macron for his words.

@EmmanuelMacron Thank you very much Mr President, the world supports your initiative and your message of UNITY God… https://t.co/KodFORJEJ0
— Shina OLAOYE (@Shina OLAOYE) 1542018724.0

@EmmanuelMacron “I have formed a very clear conception of patriotism. I have generally found it thrust into the for… https://t.co/l2vBRacEBn
— Michael McGruther (@Michael McGruther) 1542020167.0

@CBSNews Thank you and God Bless you for sending this message out to the public. Whether it means anything to our d… https://t.co/QEUItzY76r
— Diana Montgomery (@Diana Montgomery) 1541984675.0

Although some wanted to argue semantics rather than understand the point of Macron's message. But many people understood what he was saying.

@willcsquared @EmmanuelMacron Where that lacks in logic for me is that Nazis are a product of Nationalism, & Nation… https://t.co/EocAgS4cVH
— Linda (@Linda) 1542034650.0

@willcsquared @EmmanuelMacron I don't think I heard Macron say concern for others needs to be self-sacrificing. The… https://t.co/SFXldbLJ8S
— Linda (@Linda) 1542035047.0

The French President's rebuke was of the nationalism of White supremacy and neo Nazis which gave rise to fascism in the past.

@VincentTracy6 @CBSNews And, that’s what being a leading country with real leaders do, fight for global peace not a… https://t.co/fGxrKWF01u
— Brian Montano (@Brian Montano) 1541994999.0

Veterans' Day commemorations continue for much of the United States on Monday, November 12.