The U.N. says his candidacy may proceed. 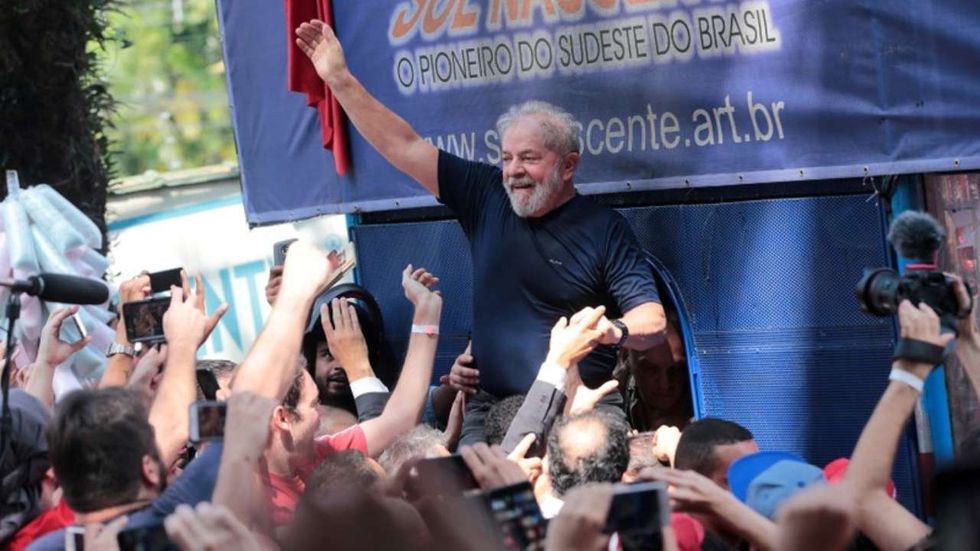 Luis Inácio Lula da Silva, Brazil's former president and now presidential candidate, leads in a new poll, released last week, which found that 37.3 percent of Brazilians favor his candidacy. His opponent, Jair Bolsonaro, a longtime congressman in Brazil’s Chamber of Deputies, is a distant second, with 18.3 percent of Brazilians expressing their support. This would all be well and good if it wasn't for one little detail: Lula is in prison.

Lula was arrested in April 2018 and sentenced to 12 years in prison on charges of money laundering and passive corruption. He had been immensely popular during his presidential tenure, at one point making Time's list of The 100 Most Influential People in the World. But his administration had, from the start, been dogged by numerous corruption scandals, and he'd been accused of illegal bribery to benefit his political party and influence peddling, including lobbying for government contracts in foreign countries for the Odebrect corporation, which has a stake in engineering, construction, and petrochemicals. He was ultimately convicted following an investigation codenamed Lava Jato (Car Wash).

A pedigree for scandals such as these would, you'd think, topple the career of any politician, but what makes the results of the poll particularly sobering is the fact that it comes just days after the United Nations ruled that the Brazilian government must allow Lula to campaign for the Workers Party (PT) while in prison because his legal appeals are still in progress. A panel from the U.N. Human Rights Committee requested that Brazil "not prevent Lula from standing for election in the 2018 presidential elections until his appeals before the courts have been completed in fair judicial proceedings.”

The U.N.'s action has been criticized:

@dwnews While this so called UN keeps in their human rights commission countries like Cuba and Venezuela how credib… https://t.co/i5yAODh8p9
— Nick Abreu (@Nick Abreu) 1534552263.0

The Brazilian government disagreed with the U.N.'s statement, responding that "the conclusions of the [UN rights] committee have the character of a recommendation and do not have a legally binding effect.”

But according to Sarah Cleveland, the vice-president of the UN Human Rights Commission, "The precautionary measures issued are not recommendations, they are legally binding and impose an international legal obligation on Brazil to fulfill them."

Cleveland emphasized that the Geneva-based commission "has no interest in the results of the elections, only in the right of everyone to participate," adding that “failure to comply with the precautionary measures would mean that Brazil would be violating” international treaties which it has already signed off on.

The UN Human Rights Commission issued the declaration on August 17, and in its ruling made recommendations on Lula's "right to participate in media events and debates, as well as convene with members of his Workers' Party," according to Telesur.

It's impossible to hide the violations practiced in Brazil by sectors of the judicial system, in cooperation with Globo (Brazil's largest media conglomerate), the mainstream media and the coup government from the rest of the world. Either comply with the United Nations decision or put Brazil on the list of lawless, undemocratic nations.

According to Datafolha, the foremost public survey and research organization in Brazil, Lula left office with a record approval rating of 83 percent in 2011. Telsur observes that "Lula has topped every 2018 electoral poll conducted by Vox Populi, Ibope, Datafolha, Data Poder 360, Instituto Parana, the National Confederation of Transportation/MDA and Ipsos."

Brazil's opposition stems from the country's Clean Slate law, which prevents politicians who have been convicted of a crime held up by appeal from running for public office. The law could prevent Lula from participating in the election after Attorney General Raquel Dodge requested that the Superior Election Tribunal disqualify him in favor of former São Paulo mayor Fernando Haddad, who commands only 4 percent of support and is Brazil's least preferred candidate.

For their part, Lula's legal team is adamant that the U.N.'s ruling means that “no Brazilian government entity can present any obstacles to former president Lula’s ability to run in the 2018 presidential elections until his appeals are exhausted in a fair trial.”

The surge in support for Lula has also rattled financial markets which blamed the Workers Party for Brazil's economic downturn. Brazil’s real "sank as much as 5 per cent on Tuesday and Wednesday before rebounding slightly," according to a Financial Times report.

“We believe a weaker path for the Brazilian real in the coming weeks is very likely,” said Mario Castro, Latam strategist at Nomura, in a report.

Brazil's political landscape has been in upheaval for quite some time. Lula was succeeded by Dilma Rousseff, his former Chief of Staff. Controversy erupted after reports indicated that Lula would play a significant role in Rousseff's government, raising concerns about his arrest and the federal investigation around him. Rousseff herself served as Brazil's president from 2011 until her impeachment and removal in 2016, becoming the first democratically-elected female President in the world to be impeached and removed, after the Chamber of Deputies found her guilty of breaking budgetary laws.