A Classmate of Brett Kavanaugh's at Yale Just Claimed That Kavanaugh Lied During His Testimony, and He's Talking to the FBI 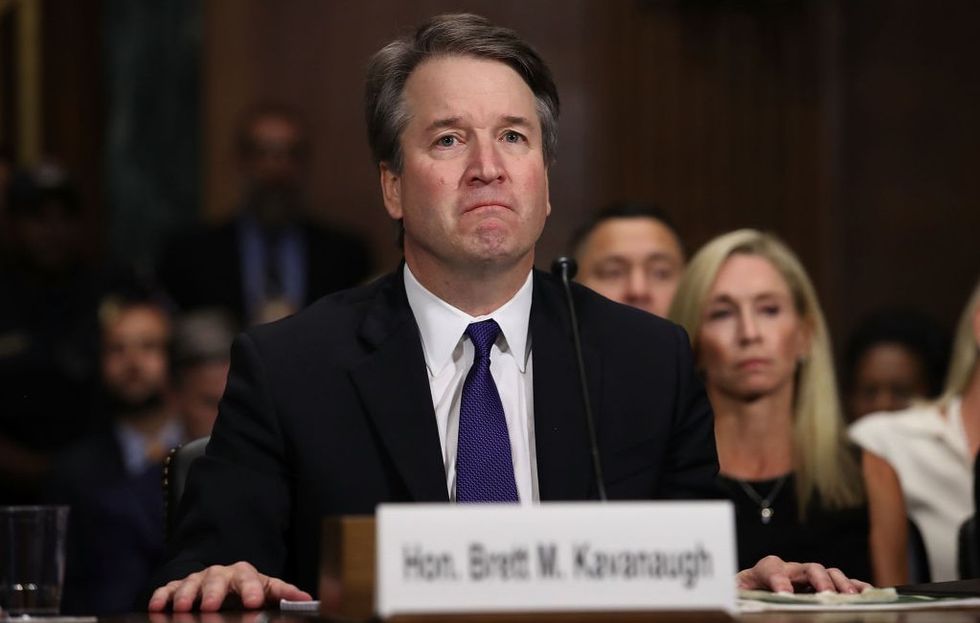 A Yale classmate of embattled Supreme Court nominee Brett Kavanaugh's says Kavanaugh lied about his drinking while under oath during his testimony before the Senate Judiciary Committee last week. Charles "Chad" Ludington claims he often drank with Kavanaugh when they were in school together in the 1980s.

Ludington's full statement was published in The New York Times. We've outlined some key excerpts below.

"I have been contacted by numerous reporters about Brett Kavanaugh and have not wanted to say anything because I had nothing to contribute about what kind of justice he would be. I knew Brett at Yale because I was a classmate and a varsity basketball player and Brett enjoyed socializing with athletes. Indeed, athletes formed the core of Brett’s social circle," he says.

"In recent days I have become deeply troubled by what has been a blatant mischaracterization by Brett himself of his drinking at Yale. When I watched Brett and his wife being interviewed on Fox News on Monday, and when I watched Brett deliver his testimony under oath to the Senate Judiciary Committee on Thursday, I cringed."

"For the fact is, at Yale, and I can speak to no other times, Brett was a frequent drinker, and a heavy drinker."

"I know, because, especially in our first two years of college, I often drank with him," he clarifies. "On many occasions I heard Brett slur his words and saw him staggering from alcohol consumption, not all of which was beer."

"When Brett got drunk, he was often belligerent and aggressive."

"On one of the last occasions I purposely socialized with Brett, I witnessed him respond to a semi-hostile remark, not by defusing the situation, but by throwing his beer in the man’s face and starting a fight that ended with one of our mutual friends in jail."

Ludington then states he does not think Kavanaugh's heavy drinking at 18 or even once he could legally drink at age 21 should disqualify him. As they both drank together at that time, Ludington believes that to say otherwise would be hypocritical of him.

However, he does take exception to Kavanaugh lying under oath and during a nationally broadcast interview at that. Ludington stated:

"...I have direct and repeated knowledge about his drinking and his disposition while drunk. And I do believe that Brett’s actions as a 53-year-old federal judge matter."

"If he lied about his past actions on national television, and more especially while speaking under oath in front of the United States Senate, I believe those lies should have consequences. It is truth that is at stake, and I believe that the ability to speak the truth, even when it does not reflect well upon oneself, is a paramount quality we seek in our nation’s most powerful judges."

Ludington made it clear at the end of his statement that based on his first-hand experience with Kavanaugh that the SCOTUS nominee lied in his Senate Judiciary Committee testimony.

Ludington ended his official statement to the press making clear his intentions. He wrote:

"I can unequivocally say that in denying the possibility that he ever blacked out from drinking, and in downplaying the degree and frequency of his drinking, Brett has not told the truth."

"I felt it was my civic duty to tell of my experience while drinking with Brett, and I offer this statement to the press. I have no desire to speak further publicly, and nothing more to say to the press at this time. I will, however, take my information to the F.B.I."

Reactions to Ludington's statement on social media showed few people surprised by the information Kavanaugh was a heavy drinker and aggressive, belligerent drunk in college.

@nytimes So he lied under oath while going for Supreme court position? That in itself disqualifies you right?
— Scooter (@Scooter) 1538363573.0

The Senate Judiciary Committee voted to pass Kavanaugh on to the full Senate for a confirmation vote. However, Republican Senator Jeff Flake voted "yes" contingent on a full FBI background check to be completed in a week and prior to a full Senate vote.