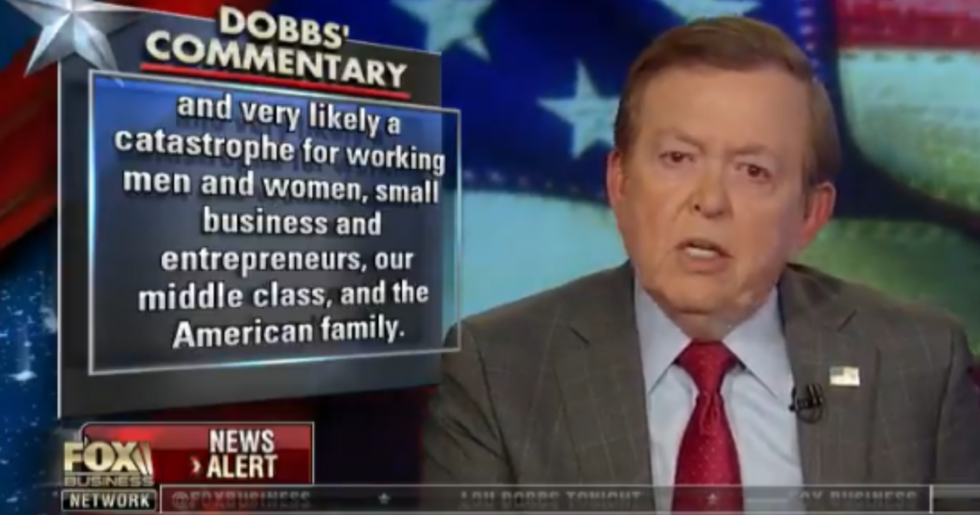 Fox Business Host Lou Dobbs appears to be souring on President Donald Trump's economic agenda, lamenting on Wednesday that Trump has sold out to "globalists" and that the White House has "lost its way."

Trump met Wednesday with his American Workforce Policy Advisory Board, which includes CEOs like Apple's Tim Cook and Amazon's Jeff Bezos, to discuss how to improve the American workforce through education, training, and better pay.

Dobbs blasted the meeting, calling it a "disastrous policy turn" and a "catastrophe for the working men and women, small business and entrepreneurs, our middle class, the American family, the very people this president has represented from the moment he announced he would run for the presidency.”

But it was Trump's endorsement of legal immigration as a source of workers that stung Dobbs the most. Trump is folding to the “globalist elites," Dobbs said, adding that Chamber of Commerce President and CEO Tom Donohue is now an "enemy" of Trump.

“That Mr. Trump would advance the interest of the globalist elites ahead of our citizens would be a tragic reversal on any day. But today, on the same day the Commerce Department reported the United States had the largest trade deficit in our history ... it all means the White House has simply lost its way."

Dobbs also predicted: "The nation’s heart will be, after all, broken by the very same people who brought 50 years of consecutive trade deficit and the export of millions of middle-class jobs and who have fed the swamp for decades."

If Dobbs is turning on Trump, the president could be in real trouble.

@thehill Dobbs saying Trump has lost his way is a sign that conservative GOP support for Trump is splintering,
— Rita Cary (@Rita Cary) 1551969278.0

It sure does look like many of Trump's biggest fans are disappointed that the president would aim to fill jobs at multi-national conglomerates, rather than local small businesses.

This is certainly an understandable frustration, however, there was never any evidence that Trump cared about the little guy.

For decades, Trump stiffed local contractors and vendors who provided goods and services to his business portfolio, such as his failed casino endeavors in Atlantic City, New Jersey. These facts - like so many other forgotten truths about Trump - were dismissed or outright ignored leading up to the election.

Next time, vet your candidate and accept that negative stories do not mean fake news.

@LouDobbs I have two words. Ivanka Trump. Anything that her and Jared are involved with might as well come from the Democratic side.
— Jim Elliott (@Jim Elliott) 1551929525.0

Further, the Tax Cuts and Jobs act signed by Trump in 2017 not only slashed tax rates for giant corporations and the wealthiest Americans, but it also provided breaks to companies that ship jobs overseas. The mammoth bottom-to-top wealth snatch provided an additional avenue for the economic elite to stash their money offshore, too.

Perhaps Trump's base is waking up to the fact they were duped. Or maybe they're simply against legal immigration. Either way, Dobbs has tapped into budding frustration on the right. The question is, will it cost Trump votes in 2020? With a 90 percent approval rating among Republicans and high marks on the economy, it is anybody's guess.