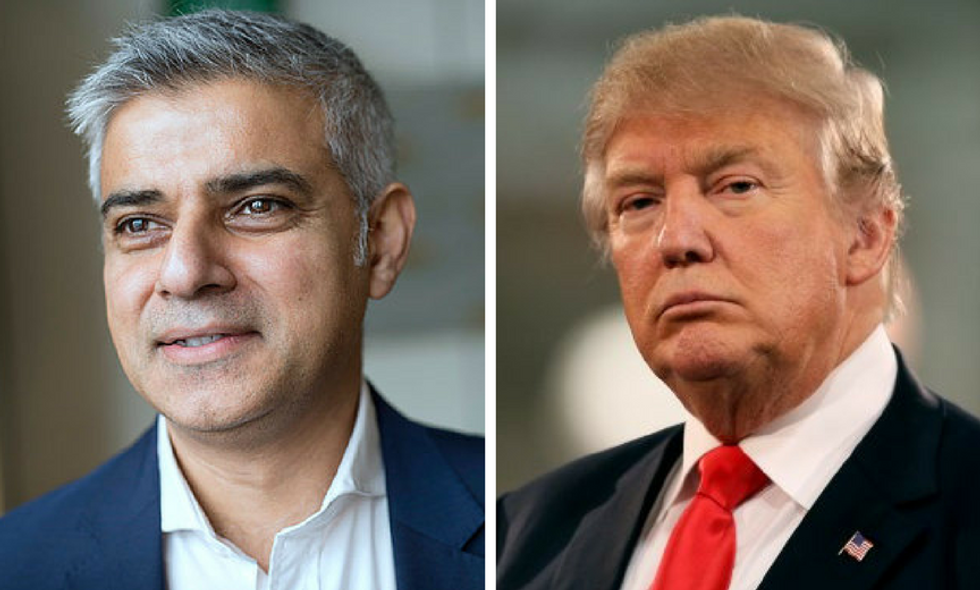 On Monday evening, London Mayor Sadiq Khan fired back at President Donald Trump, suggesting that the UK should cancel his planned state visit this fall, saying:

“I don’t think we should roll out the red carpet to the president of the USA in the circumstances where his policies go against everything we stand for."

The comments were widely seen as a rebuke to Trump's Twitter tirade against Khan in the wake of the London terror attack over the weekend in which Trump portrayed Khan as soft on terror.

“Londoners will see an increased police presence today and over the course of the next few days. There’s no reason to be alarmed.”

We are all shocked and angry today - but this is our city. We will never let these cowards win and we will never be cowed by terrorism. pic.twitter.com/o7ZMwg28mv

After widely being called out for misrepresenting Khan, Trump doubled down on his initial tweet, claiming that the mainstream media was trying to defend Khan.

Pathetic excuse by London Mayor Sadiq Khan who had to think fast on his "no reason to be alarmed" statement. MSM is working hard to sell it!
— Donald J. Trump (@Donald J. Trump) 1496670596.0

In the wake of these baseless attacks on Khan, Prime Minister Theresa May is facing increasing calls to cancel Trump's visit, just days away from Thursday's UK elections.

"Sadiq Khan has shown dignity and leadership. Theresa May absolutely must withdraw the state visit. This is a man insulting our national values at a time of introspection and mourning.”

You are truly beneath contempt. You are just a troll. Show some bottle please PM. Cancel the state visit and tell T… https://t.co/zsvvYMU8OL
— David Lammy (@David Lammy) 1496674116.0

After initially expressing her support for Khan, Prime Minister Theresa May told The Sun on Tuesday that Trump's visit would go on, saying:

“The relationship with America is our deepest and most important defence and security relationship. Having said that, I think Donald Trump is wrong in what he said about Sadiq Khan, in relation to the attack on London Bridge."