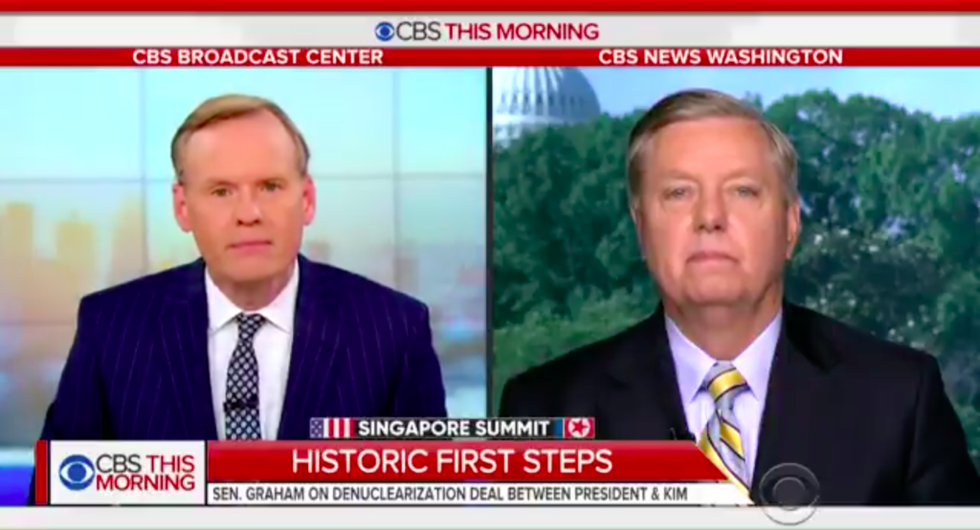 "The president said, and I'm quoting him here: 'They'—meaning North Korea—'have given up a tremendous amount with this agreement.' What have they given up?" asked John Dickerson, the co-host of CBS This Morning.

"Nothing yet," Graham replied. "This is an agreement in principle. Number one: Congratulations to President Trump bringing this about. This is a historic opportunity to end the Korean War, get North Korea to give up their weapons and missiles that threaten us and the world in return for security guarantees and prosperity. I hope it happens, but there is no agreement. And one thing I will tell you, John, if there is an agreement it must come to Congress for our approval."

Graham noted that the U.S. is a "long ways away from an agreement" with North Korea. He added that North Korea might find itself forced to negotiate because President Trump—a man who is known for his tempestuous and thin-skinned nature—would likely not be averse to a military conflict if it meant getting North Korea to shut down its nuclear program.

North Korea has "two choices: Column A is security guarantees and economic incentives to give up their nuclear program; Column B is a devastating conflict militarily which they will lose," Graham said. "President Trump has to convince Kim Jong Un he's safer and more prosperous without nuclear weapons. "

"President Trump has to convince Kim Jong Un he's safer and more prosperous without nuclear weapons. This is a firs… https://t.co/yHRkZ62EBV
— CBS This Morning (@CBS This Morning) 1528805937.0

Kim Jong Un's human rights record did not escape Graham's ire. Graham noted that Kim "kills his own people in large numbers" and that he "killed Otto Warmbier," an American college student who fell into a coma and never recovered after he was sentenced to 15 years imprisonment for attempted theft.

"But I'm willing to deal with him, on one condition, that we end this madness in North Korea," Graham said.

Graham said Kim can even visit the United States and come to the White House, but only on the condition that he "gives up his nuclear program, gives up his missile program."

He added: "I'm trying to help this president end a conflict between U.S. and N. Korea where they have a nuclear capability to hit America soon."

Earlier, during an interview with NBC’s Savannah Guthrie, Graham expressed opposition to the president's suggestion that the U.S. will withdraw its troops from the Korean Peninsula after last night's summit with Kim Jong Un. Graham said to do so would amount to "inappropriate war games" and be a major concession to a hostile regime.

“I don’t think cancelling a war game is going to matter over the arc of time. One thing I would violently disagree with is removing our troops," Graham told Guthrie. "I can’t imagine I would vote for any agreement that requires us to withdraw our forces. That would destabilize Asia. That is what China wants. That doesn’t make the world more peaceful, it makes it more dangerous. The goal is for them to give us the weapons program, missiles and bombs in return for security and prosperity.”

Graham's statements come after his colleague, Senator Rand Paul (R-KY), slammed him for drafting an authorization for the use of military force (AUMF) in North Korea should the president's meeting with Kim Jong Un prove a failure.

“Lindsey Graham is a danger to the country by even proposing ideas like authorizing war with Korea,” Paul said on CNN. “So that should be something that is seen as naive and seen as something that really serious people shouldn’t even be discussing."

Senator Rand Paul says “Lindsey Graham is a danger to the country by even proposing ideas like authorizing war with… https://t.co/bdR8gXqOcj
— The Situation Room (@The Situation Room) 1528755633.0

Paul was responding to earlier comments Graham made on ABC’s “This Week,” in which he said he’d already drafted an AUMF.

"If you’ve watched over time I think what you’ve seen from Lindsey Graham is basically a naive worldview where he believes that war is always the answer and that also means that expenditures for war are always the answer,” Paul said. “And so I think that’s bankrupting us as a country.”