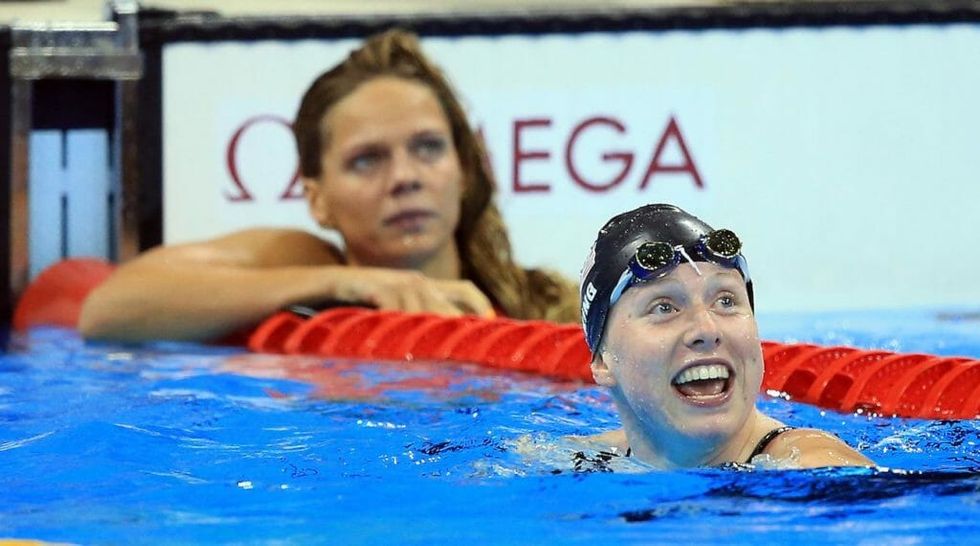 During the 100-meter breaststroke semi-finals on Sunday evening, 19-year old swimmer Lilly King made headlines for admonishing Russian competitor Yulia Efimova, who the International Swimming Federation initially banned as part of Russia's doping scandal, and the Games' decision to allow her to compete. After winning the first semi-final race, Efimova held up one finger. King wagged her finger in response while watching from inside the arena. King mimicked Efimova's gesture after winning the second semi-final.

“You’re shaking your finger No. 1, and you’ve been caught for drug cheating. I’m just not a fan,” King later explained. Nor did she backtrack on her criticisms. “That’s kind of my personality,” she said. “I’m not just this sweet little girl.… If I do need to stir it up to put a little fire under my butt or anybody else’s, then that’s what I’m going to do. It’s unfortunate that that’s going on in the sport right now, but that was her decision and [boos] are what’s going to happen.”

Last night, the two rivals competed in the finals for the same event. King beat Efimova by less than a second, winning the gold medal with a time of 1:04:93. King's fans took to Twitter to congratulate her and to share their mutual distaste for her rival.

“We can still compete clean and do well at the Olympic Games,” King said after her win. "And that's how it should be. It was so incredible, winning a gold medal and knowing I did it clean."

Yulia Efimova was one of seven Russian swimmers banned from competing in the Games who had either failed doping tests or who the  World Anti-Doping Agency named in its investigation into "Russian State manipulation of the doping control process." Efimova served a 16-month suspension as a result of the scandal. She also failed a test for meldonium, a banned substance which stimulates blood flow and improves exercise capacity in athletes, earlier this year.  (The International Olympic Committee later overturned the ban.) Both the International Swimming Federation and International Olympic Committee have yet to comment on Efimova's reinstatement.