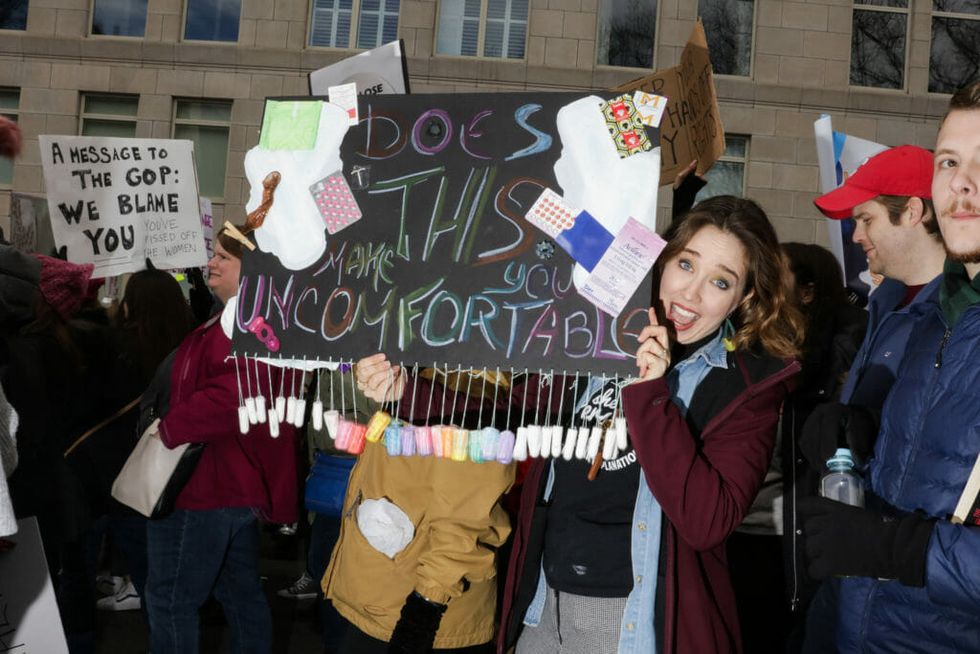 NEW YORK, NY - JANUARY 20: A demonstrator poses for a portrait with a sign decorated with tampons that says 'Does this make you uncomfortable?' during the 2018 Women's March on New York City at Central Park West on January 20, 2018 in New York City. (Photo by Rebecca Smeyne/Getty Images)

When word got out that female inmates in Arizona were allowed only 12 sanitary napkins per month, sympathetic women outside of the prison system decided to let the authorities know that this practice constituted cruel and unusual punishment. A Twitter campaign called #letitflow quickly caught the attention of male lawmakers who wanted to spend as little time as possible contemplating the natural process of menstruation.

In an effort to bring dignity and basic hygiene to corrections facilities, #letitflow encouraged women from across the country to mail tampons, pads and napkins to the Arizona Department of Corrections and to Republican state representative Thomas "T.J." Shope, who refused to consider a bill to increase the monthly allotment of feminine hygiene supplies provided to women in corrections facilities.

The bill, House Bill 2222, asked for an annual allocation of $80,000 from the state general fund for the Arizona Department of Corrections (ADC) to provide women in state prisons with unlimited free feminine hygiene products. In Arizona, incarcerated women are provided with just 12 pads per month. Those who need more — which would be all of them, as the average period lasts from three to seven days, and pads need to be changed frequently, depending on how heavy the individual’s blood flow is — are required to buy them at inflated prices from the prison store. Inmates working in prison jobs earn 9 cents an hour after tax, making these basic necessities a luxury beyond reach for many.

Another male legislator, Rep. Jay Lawrence, complained about having to hear testimony about the issue when a female legislator, Rep. Athena Salman, raised the issue before the all-male Committee on Military, Veterans and Regulatory Affairs in early February. She said the issue concerned "basic dignity and respect." "I can’t imagine something more uncomfortable than not having the menstrual products you need for your period,” she said. “So my heart goes out to these women.”

“I'm almost sorry I heard the bill,” said Lawrence. “I didn't expect to hear pads and tampons and the problems of periods,” referring to a problem more than half the population faces every month for 40 or so years of life. When Shope refused to advance the bill, activists called for the male-dominated legislature to reconsider.

The #letitflow campaign is making a difference.

Just one day into the campaign, the Department of Corrections acknowledged the campaign and announced that it will increase its allotment of pads from 12 to 36 per month, saying it "appreciates and values the comments and feedback it has received in recent days regarding sanitary napkin products provided to female inmates."

A week later, the Department of Corrections also changed its policy in regard to tampons, an item considered so luxurious that female inmates were denied access to them. Now tampons will be available as well.

Rebecca Olsen McHood, an independent candidate for the Arizona State Senate, said the male lawmakers' reluctance to advance the bill is "such a glaring example of patriarchy, and why it’s not okay to have only men in the position to make these choices."

"To have women begging men for their feminine needs is just unconscionable," she said. "It’s unfathomable."

Without adequate pads, women in prison are forced to use a single pad beyond saturation, which can lead to infections, as well as leading to blood leakage, which poses a public health issue. The United Nations recognizes menstrual hygiene as a public-health and human rights issue, and notes that poor menstrual hygiene is linked to a host of health issues, from infections to cervical cancer.

The scarcity of the items also feeds into underground economies in which desperate women are forced to barter for their basic needs.

In many other states, incarcerated women remain desperate. Although a memo issued by the Bureau of Federal Prisons in 2017 required wardens to provide tampons, pads and panty liners to all federal inmates for free, 90 percent of female prisoners are housed in state and local facilities, to which the federal requirement may not apply. In Connecticut, for instance, bunkmates are given five pads per week to split, meaning women must wear the same pad for multiple days. Since women living in close proximity tend to have synchronized periods, this leads to shortages and tensions.

Things may be changing, however. Maryland, Virginia and Nebraska have introduced legislation to change menstrual policies in recent weeks, and in 2017, Colorado passed an amendment to provide adequate hygiene supplies to its female inmates.

As more women become involved in politics, conditions may improve for menstruating behind bars. Until then, there is always the free bleeding movement.