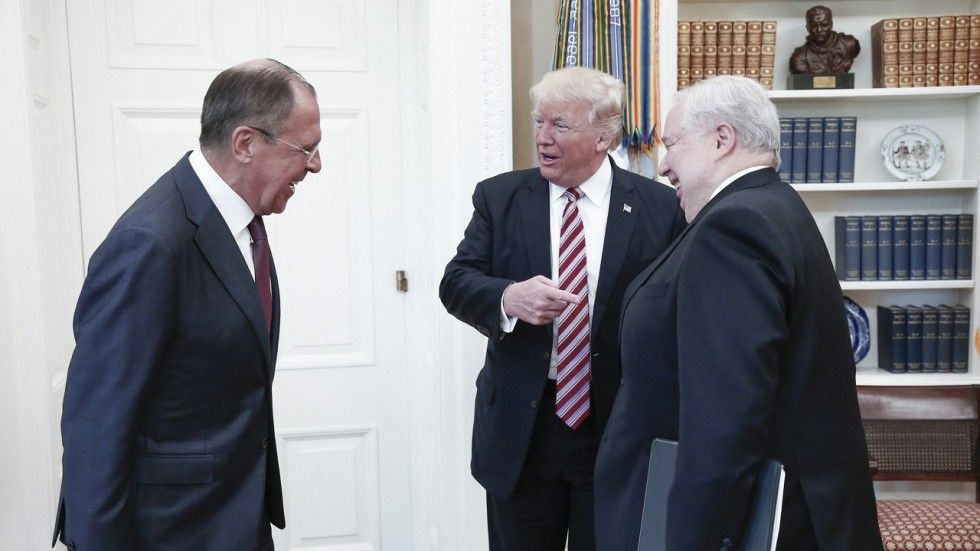 From legal scholars to television hosts, the president's critics reacted to a Washington Post report that he revealed highly classified information to Russian Foreign Minister Sergei Lavrov and Ambassador Sergey Kislyak, the latter a key figure in the probe into Russian interference in last year's election. Trump's disclosures, confirmed by anonymous officials within the administration, jeopardized a "critical" source of intelligence on the Islamic State. The information was considered so sensitive that details had been withheld from U.S. allies and even from many within the U.S. government and the intelligence community.

From Benjamin Wittes, a Senior Fellow at the Brookings Institute and the Editor-in-Chief of legal blog Lawfare:

This story is nauseating. You might have to work with natsec people to understand how bad it is, but it's horrible.… https://t.co/t62lg4KMrW
— Benjamin Wittes (@Benjamin Wittes) 1494883587.0

Elliot A. Cohen, the Robert E. Osgood Professor at the John Hopkins School of Advanced International Studies and a former counselor of the Department of State, also weighed in:

"This is appalling," Cohen wrote elsewhere. "If accidental, it would be a firing offense for anyone else. If deliberate, it would be treason."

During an appearance on CNN's "Erin Burnett Outfront," defense attorney and constitutional law scholar Alan Dershowitz said Trump now faces "the most serious charge ever made against a sitting president" in the wake of the Washington Post report. He noted that presidents have the authority to declassify information, which would likely shield Trump from both criminal investigation and impeachment.

Dershowitz also cautioned Democrats that it would be "a serious mistake" to link Trump's reckless behavior to the ongoing Russia probe.

"We should not be talking about these other issues, we should be focusing only on this threat," he continued. "That's where Republicans and Democrats can agree. Democrats should not be trying to take political advantage of this. This should be a national security issue pure and simple in isolation of everything else that went on before."

Trump, as his supporters pointed out, had a legal right to fire FBI Director James Comey. Likewise legal, Trump’s decision to hold on to his vast and non-transparent business empire, the value of which he can increase through his powers as president. (“The law’s totally on my side, meaning, the president can’t have a conflict of interest,” he exulted.) That is true, and the legality Trump enjoys extends much further than even his supporters have suggested. Since the president can pardon anybody, probably including himself, he can operate with hardly any legal restraint at all.

The president has a massive amount of leeway because the system is set up with the unstated presumption that the president is a responsible person who will act in a broadly legitimate, competent fashion. Trump’s brief tenure in office so far has supplied a constant stream of evidence that this reasoning does not apply. Fears that Trump could not be trusted with classified intelligence have circulated among allies and the American intelligence community since his election... Now those fears have been vindicated.

“I have something to say here. Donald Trump, if you’re watching, first of all: You’re a bad president. Please resign,” he said to thunderous applause.

Tonight: with the President fuming and a White House shakeup looming, Stephen hopes one special person gets to stay… https://t.co/JxTlaEZ3dY
— The Late Show (@The Late Show) 1494896825.0

The Twitter account for Comedy Central's The Daily Show with Trevor Noah called out Congressional Republicans in a series of tweets.

"HOW MANY TIMES WILL WE FIND REPUBLICANS CRITICIZING THE EXACT THING TRUMP IS DOING?" reads the complete message, a reference to the many months the party spent investigating former Secretary of State Hillary Clinton's usage of a private email server on the belief she'd purposely leaked classified information.