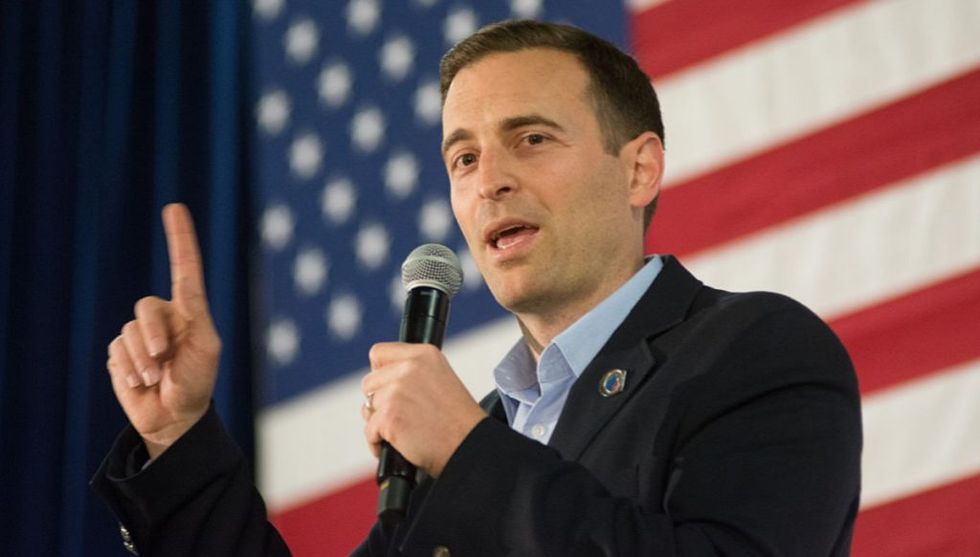 ...and again in October prior to a second Trump rally that was held in Elko, Nevada.

But not everyone is endorsing Laxalt. In fact, one group that strongly opposes Adam Laxalt for Governor surprised people when they voiced their opposition in an OpEd in the Reno Gazette Journal.

Twelve members of candidate Laxalt's family wrote why they think he is not the right person to be Nevada's Governor. Their main concern?

Adam Laxalt did not grow up and rarely spent any time in Nevada until he decided to begin his political career. His family began their OpEd stating:

"The decision to write this column has not been an easy one for us. We are writing as members of the Laxalt family who have spent our lives in Nevada, and feel compelled to protect our family name from being leveraged and exploited by Adam Laxalt, the Republican candidate for governor."

"Like most Nevadans, the idea of family is important to us, and we are proud of the history that our family has in our state. The first generation of Laxalts came to Nevada as immigrants 100 years ago, and their children went on to be parts of the Nevada community—as politicians and writers and teachers and in many other ways."

"Over the years, we’ve always supported our family, even when we haven’t always agreed with them or their politics. But as this Election Day nears, we feel compelled to speak publicly about why we believe that Adam Laxalt is the wrong choice for Nevada’s governorship."

"There are many specific, well-documented reasons why we believe this to be the case."

Laxalt's family began with their primary concern, his lack of connection to Nevada.

"First, for those of us who were actually raised in Nevada, it’s difficult to hear him continue to falsely claim that he was raised in Nevada or has any true connections to Nevadans. The simple fact is that while he may have been born in Reno, he left as an infant and was raised on the East Coast, 3,000 miles away, in Washington, D.C., and moved here only in 2013, only one year later launching his political career."

"Aside from the occasional short visit, Adam never knew the state or its people. Perhaps if he had, he would stand for Nevada’s values rather than for those of his out-of-state donors."

Later in their OpEd, they reiterated their point by stating:

"[Adam Laxalt] moved to Nevada in 2013 so that he could lean on the reputation of a family that he hardly knew while tapping into support by donors who had no interest in our state or its people."

The GOP candidate's family then criticized their relatives sincerity.

They pointed to an annual fundraiser Laxalt holds—his Basque Fry—highlighting the "phoniness of the setting and costumes, the pretense of folksiness used as a prop for Washington power players like Kellyanne Conway and Devin Nunes."

"...there is the simple question of whether Adam is qualified to head the executive branch in Nevada. His brief experience as a practicing lawyer was described as a 'train wreck' by members of his own firm. His tenure in the attorney general’s office has been little more than a four-year publicity tour for his current campaign for governor—in fact, he outsourced jobs in the AG’s office to out-of-state lawyers who were given special exemptions to practice law in Nevada...."

"...Most concerning are the ethical shortcomings that have come to light while Adam has been attorney general, and his willingness to ignore the law for self-serving political purposes. In his short time in public office, Adam has already demonstrated a servitude to donors and out-of-state interests that puts their concerns ahead of real Nevadans’."

Laxalt's family concluded their appeal to the people of Nevada by stating his shortcomings made him the wrong person for Nevada. They stated:

"All of these shortcomings come down to a lack of real, authentic connection to our state, and a failure to understand what is important to real Nevadans."

Then they added a call for the people of Nevada to care about their home and to protect it from the outside interests they say control and drive Adam Laxalt's career.

"It’s worth saying that this column isn’t about politics. We would be proud to have a Laxalt running for office on Nov. 6, regardless of whether they were Republican or Democrat or independent, so long as we believed that they would be good for Nevada. We’re writing because we care about Nevada and because we know the truth about this candidate. We think that you should, too."

As of Tuesday afternoon, an official response had not been issued by the Republican gubernatorial candidate.