We Now Know Why Donald Trump's Lawyers Don't Want Him to Meet With Mueller, and We Get It 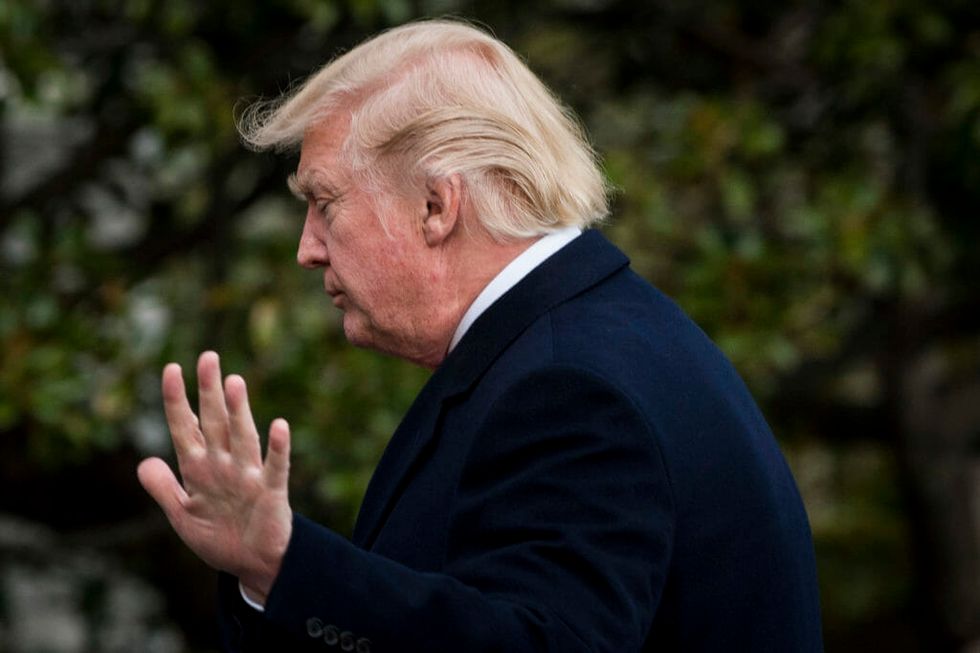 President Donald Trump acknowledges the media as he walks to the residence after disembarking from Marine One on the South Lawn of the White House on March 19, 2017 in Washington, DC. (Pete Marovich-Pool/Getty Images)

A New York Times report reveals that President Donald Trump's lawyers have advised him against sitting down for an interview with special counsel Robert Mueller because the president, "who has a history of making false statements and contradicting himself, could be charged with lying to investigators." Their stance "puts them at odds" with the president, who last month declared that he was “looking forward” to speaking with federal prosecutors as part of the ongoing investigation into Russian interference.

Rejecting an interview with Mueller carries political consequences, and the president is expected to issue a decision on whether he'll cooperate with the probe in the coming weeks. Should Trump refuse to sit down for an interview, Mueller could subpoena him to testify before a grand jury, setting the stage for a court battle which could be decided by the Supreme Court. But a court fight could fuel speculation that the president has something to hide and effectively prolong the investigation, dampening Republican prospects in the approaching midterm elections.

Nevertheless, John Dowd, the attorney who is representing Trump in the special counsel's inquiry, wants to reject an interview request. Fellow Trump attorney Jay Sekulow agrees with Dowd, as do many West Wing advisers, according to four people briefed on the matter who spoke to Times reporters on condition of anonymity. Trump's legal team, the four individuals allege, is betting on the possibility that Mueller "might be unwilling to subpoena the president and set off a showdown with the White House that Mr. Mueller could lose in court." As the Times notes:

They are convinced that Mr. Mueller lacks the legal standing to question Mr. Trump about some of the matters he is investigating, like the president’s role in providing a misleading response last summer to a New York Times article about a meeting Mr. Trump’s son Donald Trump Jr. had with Russians offering dirt on Hillary Clinton. The advisers have also argued that on other matters — like the allegations that the president asked James B. Comey, then the F.B.I. director, to end the investigation into the former national security adviser Michael T. Flynn — the president acted within his constitutional authority and cannot be questioned about acts that were legal.

By contrast, Ty Cobb, a lawyer the White House hired in July to handle its response to the Russia probe, has argued that Trump should absolutely cooperate with Mueller. But his advice appears to have been drowned out by Dowd, who has "taken the lead" on dealing with Mueller about an interview and has been in talks with Mueller's office since December.

A number of prominent lawmakers have also echoed Dowd's advice that Trump should not cooperate. One of them is Chris Christie, the former governor of New Jersey who, for a brief period, led the presidential transition team. "I don’t think the president of the United States, unless there are credible allegations — which I don’t believe there are — should be sitting across from a special counsel,” Christie said during an appearance on ABC's Good Morning America.

Christie added that he doesn't believe the president should answer questions about possible obstruction of justice. “That’s a very high standard to meet … I don’t think we’ve met that high standard yet as to President Trump, but we’ve got to continue to watch it,” he said. “Because the one thing I can tell you for sure, and one of the things I loved about being a prosecutor, was only I knew what I knew. Only Bob Mueller really knows what he knows and we won't know it for awhile."

Former House Speaker Newt Gingrich also weighed in recently, telling Fox and Friends last month that "putting Trump in a room with five or six hardened, very clever lawyers, all of whom are trying to trick him and trap him, would be a very, very bad idea.”

When Reuters asked the White House legal team to comment on the news, Trump's attorneys sent a statement that said the discussions between the president’s personal lawyers and the special counsel’s office “regarding how and under what terms information will be exchanged are understandably private.”