Laura Ingraham Just Questioned How MLK Would Feel About Democrats If He Were Alive Today, and Now People Are Giving Her a History Lesson 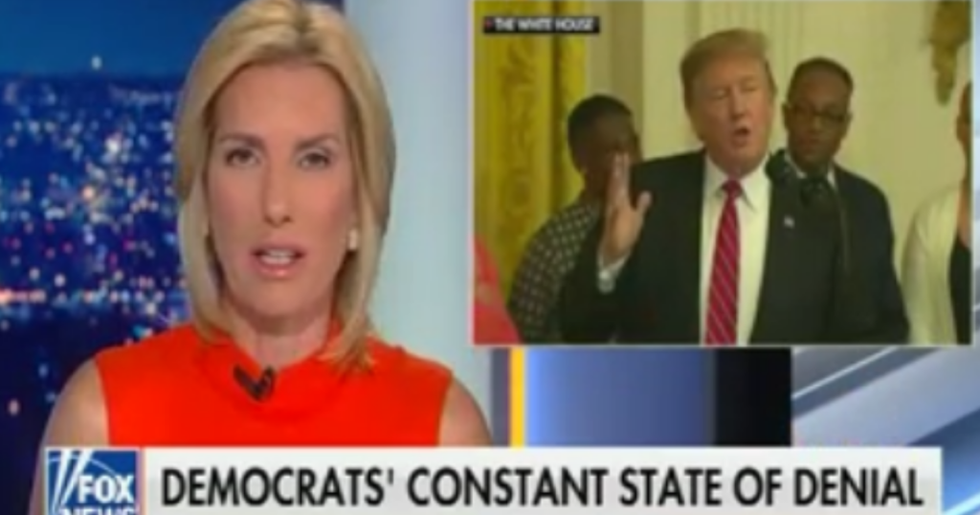 In a bizarre rant against the prospect of reparations for black Americans descended from slaves, Ingraham said that the renewed push on the left, which she dubbed “the milquetoast millennial class," working to atone for the original sin of slavery is just a way to undermine Trump's successes.

Laura Ingraham thinks MLK would be very upset at the Democrats of today bc they protest https://t.co/A1uMY9jsOl
— Andrew Lawrence (@Andrew Lawrence) 1554430351.0

"What message do these folks offer America's voters? I'll tell you what they offer," Ingraham charged. "Resentment, anger, division, and alienation. And these Democrats don't even acknowledge obvious gains, but you know why they won't? Because to do so would affirm that Trump's policies are working. Can't have that."

Ingraham accused Democratic presidential hopefuls like Pete Buttigieg and Beto O'Rourke of attempting to "kowtow to Al Sharpton" as if "America didn't even elect, and then re-elect its first black president," Barack Obama (apparently Obama's election marked the end of racism in America).

"But for the hardcore racial rabble-rousers, Obama's victories, remember, they were just baby steps. What they want now is full-on income confiscation meant to enforce equal outcomes, if not equal opportunity," Ingraham said.

"Wow, pretty dismissive of Obama there," Ingraham said of Sharpton, who in a clip was speaking about how electing a black president is not the end of the fight for equality.

Ingraham then invoked the 51st anniversary of King's assassination, which was Thursday, to peddle the idea that King would have disagreed with Democrats and their continued fight for equal justice.

"Today is the anniversary of the assassination of Martin Luther King Jr. I was thinking, like, if he were alive today I wonder what he’d think about such dismissive comments. And about a Democrat Party that believes it can regain power by living in a constant state of protest, or racial hatred, and denial."

Ingraham needed a history lesson. And she got one.

@ndrew_lawrence “There is never a time in our American democracy that we must ever think we’re wrong when we protes… https://t.co/cPXDbmZIeC
— Drew Dellinger (@Drew Dellinger) 1554434482.0

@ndrew_lawrence He already answered: I have almost reached the regrettable conclusion that the Negro's great stumbl… https://t.co/IsYH2MzLnO
— SMH (@SMH) 1554430642.0

Ingraham really went there and people are not happy.

Ingraham had railed against “demographic changes” that she claimed have been “foisted on the American people.” Ingraham added that “they are changes that none of us ever voted for, and most of us don’t like.”

And in September, Ingraham's brother said she was a "monster" and a "hypocrite" for her far-right views on immigration, race, and gay rights.