Laura Ingraham Just Tried to Walk Back Her Racist Rant, but Twitter Isn't Having It 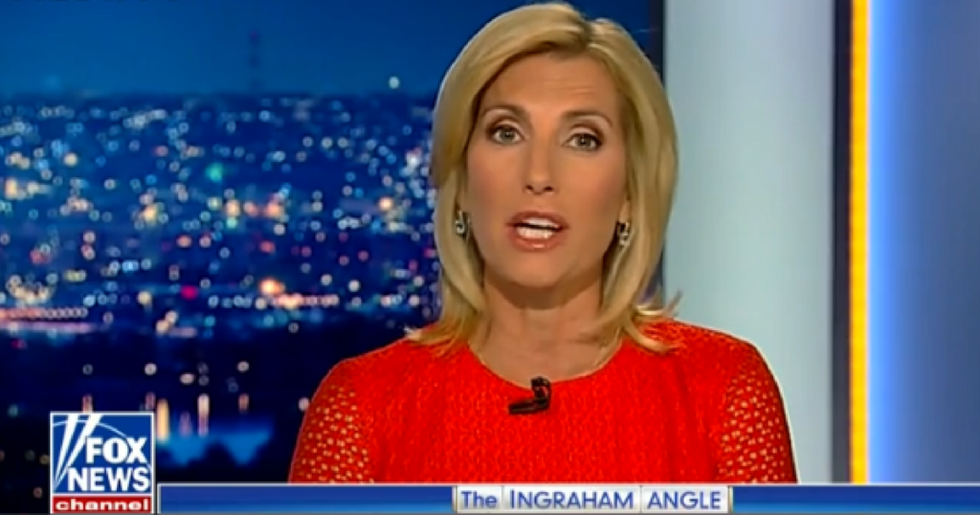 Fox News host Laura Ingraham responded on Thursday to backlash caused by remarks she made about immigration on Wednesday, which prompted an endorsement of a white supremacist leader and widespread condemnation from others in the media.

"I want to start tonight by addressing my commentary at the top of last night’s show," Ingraham, host of The Ingraham Angle, began. What followed was less of an apology and more of an attempt at rationalization.

"A message to those who are distorting my views, including all white nationalists and especially one racist freak whose name I won’t even mention," Ingraham said. KKK leader David Duke had endorsed Ingraham's remarks on demographics on Twitter but then deleted the post.

Duke referred to Ingraham's Wednesday rant as "one of the most important (truthful) monologues in the history of MSM."

The comments Laura Ingraham made about immigrants and immigration was so racist David Duke had an orgasm. Fox News… https://t.co/94g78Ohq1F
— Christopher Bouzy (@Christopher Bouzy) 1533901173.0

"You do not have my support," Ingraham said of Duke. "You don’t represent my views and you are antithetical to the beliefs I hold dear.”

Ingraham tried to clarify her Wednesday comments by defending the "rule of law meaning secure borders," which she claimed, "used to bind our country together."

"Despite what some may be contending, I made it explicitly clear my commentary had nothing to do with race or ethnicity, but rather a shared goal of keeping America safe and her citizens safe and prosperous," she said, followed by a push for "merit-based immigration.

Furthermore, as I have said repeatedly on the show, merit-based immigration does wonders for our country’s economy, our way of life, and how we define our country. I even said that in my opening thoughts last night.

"I want to make it really clear that my concern will continue to remain with the families who have suffered the tragic result of illegal immigration," Ingraham concluded. "The children put in dangerous and unfair situations at the border and all those border agents around the country who work to keep our country safe."

On Wednesday, Ingraham railed against "demographic changes" that she claimed have been "foisted on the American people." Ingraham added that "they are changes that none of us ever voted for, and most of us don’t like."

Conservative commentator Amanda Carpenter fired back at Ingraham: "Laura, I want to know, who is the one who really hates America?"

MSNBC's Donnie Deutsch called for an advertising boycott of Ingraham's show over her comments.

He wasn't the only one.

"You know, what "demographics" means," tweeted Seth Abramson. "If you're a company still advertising on her show, I have no idea what you're thinking."

"To turn a phrase back on our us-versus-them friends — if you don’t like what America is, you leave," CNN's Chris Cuomo said on Thursday's Prime Time.

“Every time the president opens his mouth he reaffirms some of the fundamental predicates of that white nationalist… https://t.co/36kW2ScS6z
— Raw Story (@Raw Story) 1533900864.0

Others on social media torched Ingraham and her racist comments.

Laura Ingraham has been a bigot since college. She was literally disciplined for targeting and harassing people as… https://t.co/o5nDNI8w7u
— Shaun King (@Shaun King) 1533829337.0

"What awful, racist thing can I say on TV today to make me lose all my sponsors?" comic Erik Bransteen asked of Ingraham.

Social media was inundated with pointed attacks on Ingraham, whose wickedly racist views are nothing new.

Sorry @IngrahamAngle... the America we know and love is not the racist, xenophobic white-nationalist cesspool you w… https://t.co/WlUcQKbsRj
— Andy Ostroy (@Andy Ostroy) 1533903187.0

"This will be your legacy."

@IngrahamAngle Lady we get you’re a racist and you basically hate immigration of anyone other than white... this will be your legacy.
— Kas (@Kas) 1533897984.0