Laura Ingraham Just Made a Bonkers Claim About Democrats to Get Republicans to Vote, and People Are Crying Foul 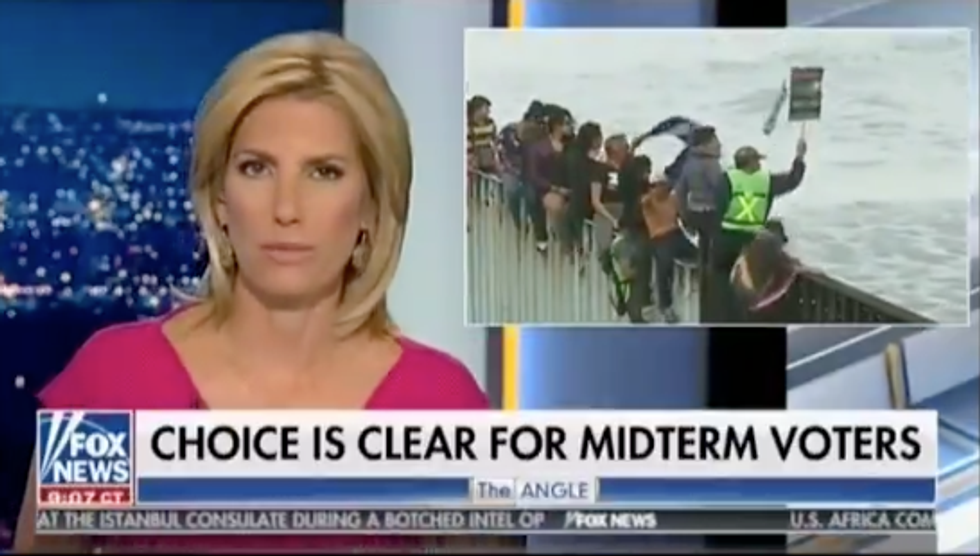 Fox News host Laura Ingraham is using xenophobia to motivate Republicans to vote. On her show The Ingraham Angle Tuesday night, Ingraham stoked fears over immigration to drive conservative voters to the polls in November.

In a fiery rant, Ingraham warned her viewers that "the cause" of protecting the border would be "totally lost" if "open borders" Democrats win control of the U.S. House of Representatives, and that American citizens would be "replaced" with "chain migrants."

“Your views on immigration will have zero impact and zero influence on a House dominated by Democrats who want to replace you, the American voters, with newly amnestied citizens and an ever-increasing number of chain migrants,” Ingraham said.

The shifting demographics of the American electorate clearly scares the bejesus out of Ingraham and her fans.

They're terrified. They see the writing on the wall. The demographics are changing, and they're not going to be a p… https://t.co/UMwcCjRw2U
— Indivisibly Ian (@Indivisibly Ian) 1539793939.0

But the idea that citizens will be "replaced" is a new one.

@SocialPowerOne1 Really?! I have four children, all with spouses, six grandchildren and we are a growing family. Ho… https://t.co/qbc6cDtT3B
— Barbara Kehl (@Barbara Kehl) 1539745070.0

Some joked that they'd like to replace Ingraham with an immigrant.

Others noted that First Lady Melania Trump brought her Slovenian parents to the United States through so-called chain migration, which President Donald Trump also bemoans quite regularly. The hypocrisy is strong.

Ingraham also told her viewers that birthright citizenship is a "travesty" and that Americans desperately need a border wall.

"There's so much on the line for America," Ingraham griped. "Will Trump get the funding for his wall? Will the mass migration from other poor countries in Central America be stopped at all?"

Birthright citizenship is enshrined in the United States Constitution's 14th Amendment, which the Supreme Court has upheld since its ratification in 1868.

Conservatives such as Ingraham believe that undocumented immigrants abuse this by coming to the United States to have kids, thus guaranteeing their children American citizenship.

But to those who support giving people the opportunity to come to the United States for a better life, the real travesty is Ingraham's brand of fear.

@HuffPost The whole of fox propaganda network is the scariest thing that I know, after all they have divided this n… https://t.co/h6MQzhm5zy
— Stephrn Hamilton (@Stephrn Hamilton) 1539791779.0

Ingraham's show has lost major advertisers after she teased a student survivor of the Parkland school shooting in February. This latest rant probably won't help redeem her.