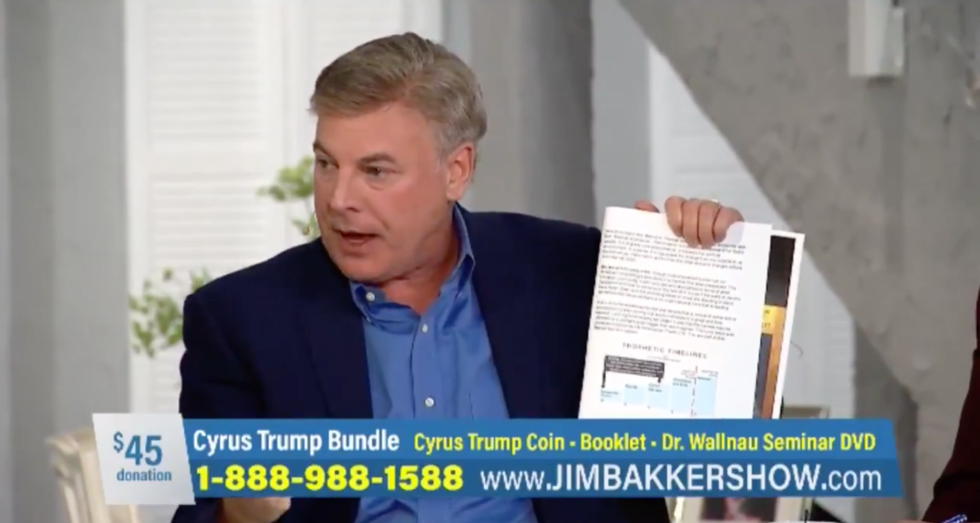 Evangelical author Lance Wallnau described a $45 coin decorated with President Donald Trump's face as a "point of contact" with God. The coin was promoted on The Jim Bakker Show. It depicts Trump alongside King Cyrus, the founder of the first Persian empire.

“When I asked the Lord ‘Why the coin?’ he said, ‘Because when you take the coin, it’s a point of contact,'” Wallnau, who once compared Trump to King Cyrus, says in a viral clip of the promotion. “So your faith is being released with a million other believers to pray protection and peace and wisdom and counsel over the president of the United States and over his family."

“It’s our point of contact every day. When you see it remember God put something in your hand that you have a role in. That’s why we got to pray, because they think we’re crazy. But we’re actually the sane ones. We gotta pray. The teaching that is here, this coin is a point of contact, this 24-carat gold plated coin."

@RightWingWatch When I was twenty I had thought up scams like this. My parents told me I was nuts and no one would… https://t.co/gqhICJY72a
— Damian Staron (@Damian Staron) 1557860343.0

@RightWingWatch Maybe I’ll make and sell an arch to enable gullible people to pass through into heaven. Or stepping… https://t.co/fPoHHnhxys
— FrayedKnot (@FrayedKnot) 1557886683.0

Oddly enough, this isn't the first time President Trump has made headlines over a coin.

The White House courted controversy last year after Trump was scheduled to meet with North Korean leader Kim Jong Un in May 2018. The U.S. military released a commemorative “challenge” coin to commemorate the meeting, the first between a North Korean leader and a U.S. president, even though the occasion had not technically happened yet. Then Trump canceled the event, rendering the coins an odd artifact as the two nations traded jabs for several weeks until they eventually met the following month to a mixed reception.

In another premature turn of events, the White House Gift Shop (not actually affiliated with the White House) gave shoppers the opportunity the chance to pre-order a commemorative coin with Associate Supreme Court Justice Brett Kavanaugh's name on it before he'd even been confirmed.