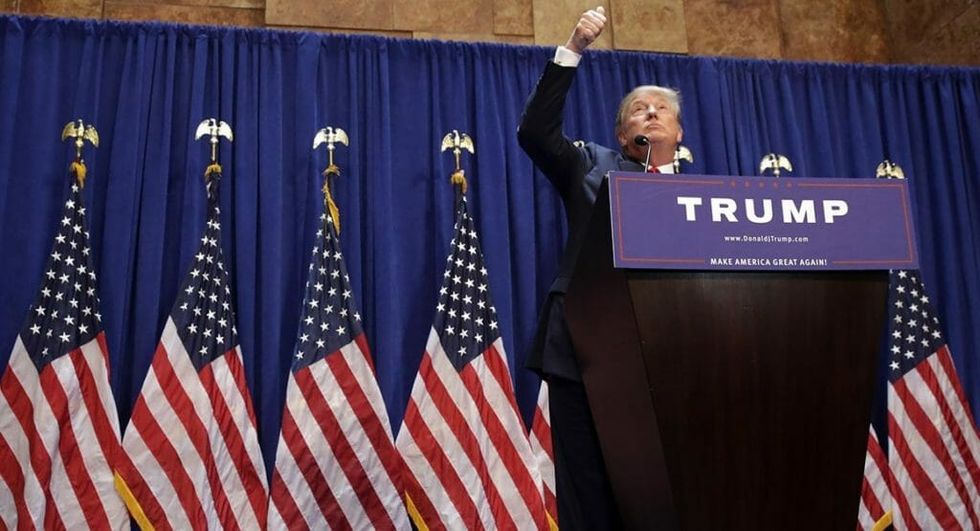 "Nothing prepared us for the magnitude of this train wreck," the editorial board wrote. "Like millions of other Americans, we clung to a slim hope that the new president would turn out to be all noise and bluster, or that the people around him in the White House would act as a check on his worst instincts, or that he would be sobered and transformed by the awesome responsibilities of office. Instead, seventy-some days in — and with about 1,400 to go before his term is completed — it is increasingly clear that those hopes were misplaced."

The board promised to examine three of the president's "most troubling traits" in the coming days.

THE FIRST: "Trump’s shocking lack of respect for those fundamental rules and institutions on which our government is based."

Since his inauguration, the editorial board argues, Trump "has repeatedly disparaged and challenged those entities that have threatened his agenda, stoking public distrust of essential institutions in a way that undermines faith in American democracy."

Trump has "questioned the qualifications of judges and the integrity of their decisions, rather than acknowledging that even the president must submit to the rule of law," they continue. "He has clashed with his own intelligence agencies, demeaned government workers and questioned the credibility of the electoral system and the Federal Reserve. He has lashed out at journalists, declaring them “enemies of the people,” rather than defending "the importance of a critical, independent free press."

THE SECOND: "His utter lack of regard for truth."

"It’s difficult to know whether he actually can’t distinguish the real from the unreal — or whether he intentionally conflates the two to befuddle voters, deflect criticism and undermine the very idea of objective truth," the editorial board says. "Whatever the explanation, he is encouraging Americans to reject facts, to disrespect science, documents, nonpartisanship and the mainstream media — and instead to simply take positions on the basis of ideology and preconceived notions. This is a recipe for a divided country in which differences grow deeper and rational compromise becomes impossible."

In recent weeks, Trump, often through embattled White House Press Secretary Sean Spicer, has quibbled over the size of the crowd that attended his inauguration, they note. FBI Director James Comey has also asked the Justice Department to publicly reject Trump’s claims that former President Barack Obama ordered the wiretapping of Trump Tower. The president leveled the allegations without evidence, they add.

"It is deeply alarming that a president would lend the credibility of his office to ideas that have been rightly rejected by politicians from both major political parties," the board writes.

The board cites Trump's penchant for "retweeting racists," his "unverifiable or false statements about rigged elections and fraudulent voters," as well as his willingness "to buy into discredited conspiracy theories first floated on fringe websites and in supermarket tabloids."

Trump has often claimed that "millions" of votes were cast illegally, ironically casting doubt on the legitimacy of the election he supposedly won. Election law experts have been quick to reject his claims.

In the past, Trump perpetuated the long-standing rumors and conspiracy theories that have accused former President Barack Obama himself of not being an American citizen, despite incontrovertible evidence to the contrary.

"The role of the rational opposition is to stand up for the rule of law, the electoral process, the peaceful transfer of power and the role of institutions; we should not underestimate the resiliency of a system in which laws are greater than individuals and voters are as powerful as presidents," the board opines. "This nation survived Andrew Jackson and Richard Nixon. It survived slavery. It survived devastating wars. Most likely, it will survive again."

But if the United States is to survive, they continue, "those who oppose the new president’s reckless and heartless agenda must make their voices heard. Protesters must raise their banners. Voters must turn out for elections. Members of Congress — including and especially Republicans — must find the political courage to stand up to Trump. Courts must safeguard the Constitution. State legislators must pass laws to protect their citizens and their policies from federal meddling. All of us who are in the business of holding leaders accountable must redouble our efforts to defend the truth from his cynical assaults."