A Republican Governor Just Blasted Trump for the Way He's 'Devastated' Her State, and People Aren't Feeling Too Sorry for Her 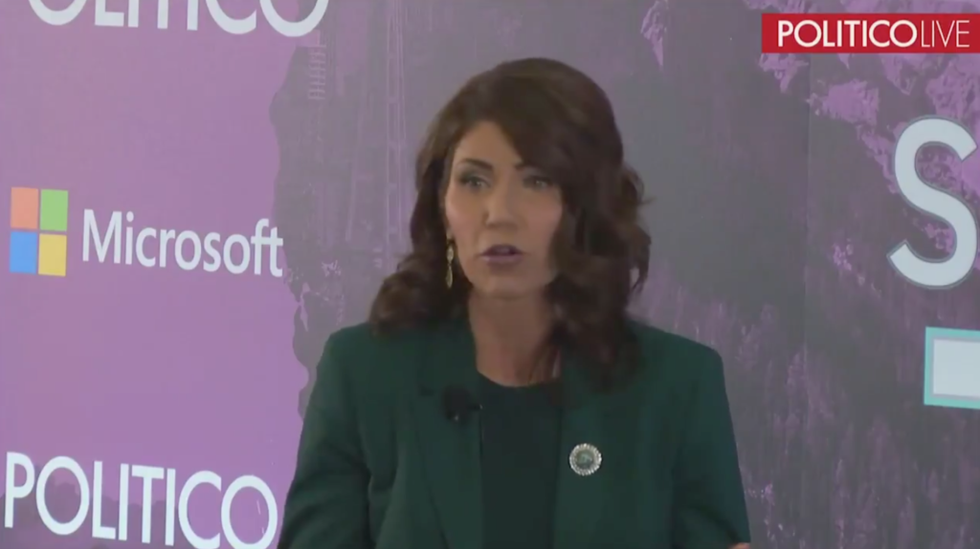 President Donald Trump endorsed South Dakota's Republican Governor Kristi Noem during her gubernatorial campaign in September of last year. She, somewhat reluctantly, pledged her support for Trump after he won the Republican nomination in 2016.

Despite her initial support of the President, Noem criticized his trade policies at a conference hosted by Politico on Friday.  Noem lamented that Trump's trade wars have "devastated" her state.

"I spoke to the administration just within the last couple of days. I have meetings several times at the White House in the next several days to talk about this issue. South Dakota has been devastated by the trade wars that are going on, and agriculture is our number one industry by far. So when we aren't able to export our soybeans to the Asia Pacific region, when we're struggling with commodity prices, that's affecting not just those farmers out there on the ground, but every main street business, everybody that has another entity out there that relies on a successful Ag industry."

Soybean exports to China fell by 94% in November of last year after the country levied a tariff in response to Trump's drastic tariff increases on Chinese steel and other goods, leaving the administration to dole out billions of dollars to farmers to supplement the losses.

While answering questions in the Oval Office today, Trump said, "I think there's a good chance that [a trade deal with China] happens."

As for Noem, many can't help but feel unsympathetic toward the governor.

@thehill Well if Trump knows you'll vote for him no matter what, he won't care if his policies help or hurt you.
— DuggieFrezh (@DuggieFrezh) 1550864645.0

One person, however, is particularly proud of the tariffs.

In a possible indication that Trump doesn't actually know who bears the financial fallout of tariffs, he's touted his eagerness to deploy them.

The United States Treasury has taken in MANY billions of dollars from the Tariffs we are charging China and other c… https://t.co/pPMP10Birv
— Donald J. Trump (@Donald J. Trump) 1546527133.0

Trump has also threatened and deployed tariffs against Canada, the European Union, and Mexico.

Trade talks with China are ongoing.

For farmers' sakes, we hope it happens soon.